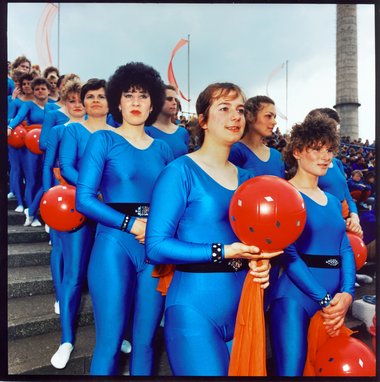 The juxtaposition evident in the subject matter is also interesting. Jens Rötzsch's colourful shot 'Berlin (East) 1989 - Pentecost meeting of the FDJ - Stadium of World Youth' still adheres to the documentary quality of the earlier parts of the exhibition. In contrast, Florian Merkel's work, 'Man with Frog' from 1987 is totally devoid of implicit references to Merkel's surroundings.

As a general rule of thumb, I am always a little dubious about exhibitions or other events which purport to represent aspects of life in the former German Democratic Republic (GDR or East Germany). History is written by the ‘winners,’ and in Berlin especially there are countless examples of the reunified Germany openly making fun of the conditions in the former GDR territories, from the GDR Museum with its portrayal of the simple, functional lifestyles of the east, to the use of the Ampelmännchen (the figure on traffic lights which tells you when to walk and when to wait) as a symbol on anything from t-shirts to handbags and beer coasters - all being sold at high prices near several tourist attractions throughout the city.

With that being said, the Berlinische Galerie’s latest exhibition, The Shuttered Society, Art Photography in the GDR 1949-1989, is a fascinating look at the artistic practices of photographers in the famously isolated and closely monitored society of East Germany. While the explicit criticism of the title is very much in keeping with modern day Germany’s attitudes towards its Soviet past (a past it seems much more open to acknowledging publically than its time under the NSDAP), the work on display and its careful arrangement are undoubtedly strong.

The show is divided into three distinct chapters which trace a rough chronological path from the 1950s up until the fall of the Berlin wall in 1989. The first chapter which also accounts for the largest section of the exhibition is dedicated to what is referred to in press releases as “socially committed” photography, the “most prominent hall-mark of artistic photography in the GDR.” To see images of the former East captured by those within it is to see a group of artists trying to make a social commentary in a place and a time when such an activity was next to impossible. From family portraits to images of daily activities and street scenes, the social conditions of the East are shown essentially in a documentary format, with any and all subjectivity expressed in only implicit glimpses. Predictably, photography of this sort was incredibly difficult to show, as it often strayed far from the propaganda images one would more commonly associate with the East.

The second chapter of the exhibition traces the modernist ideas of the 1920’s as they were picked up in the 1070’s (having been largely rejected in the immediate post war period). As well as a greater focus on the various possibilities of the medium itself, this period also saw works being created for spaces other than white walls and small print journals. Jörg Kröfel’s large installation Schlachthaus, Berlin 1986-1988 is a labyrinth built out of steel panels with no exit at the end. Within the maze are images of a slaughterhouse, the animals and the workers portrayed as part of a larger process. Ostensibly it is a portrait of the worker, a continual theme of East German rhetoric in all its forms, yet at the same time Kröfel’s work is clearly about more than that. It’s an expression of the restrictions many experienced under East German, and by extension, Soviet rule; perhaps a comment that in such an environment, both are merely fodder for something higher up the food chain.

The third and final angle explored within the exhibition is the period leading up the collapse of the East German regime and the reintegration of the Eastern territories back into a single united Germany. The younger generation represented here are described as disillusioned, which fits with the wider western master narrative of life in the east. While aspects of that could surely be debated what does come through clearly is a deep questioning of the self by the artists included in this chapter. The role of the body and a sense of place within the wider world are common themes, as well as a further blossoming interest in the possibilities of the medium of photography itself, its properties and potential subversion as a means of expressing a more personal emotional palette.

The juxtaposition evident in the subject matter is also interesting within this section. Jens Rötzsch’s colourful shot Berlin (East) 1989 - Pentecost meeting of the FDJ - Stadium of World Youth still adheres to the documentary quality of the earlier parts of the exhibition. In contrast, Florian Merkel’s work, Man with Frog from 1987 is totally devoid of implicit references to Merkel’s surroundings. Its wider significance is bought to the fore much clearer by its placement within this particular division of the exhibition, and shows how much wider the interests explored through artistic photography were starting to become.

Elsewhere in this third chapter, Peter Oehlman’s Untitled image of Berlin’s skyline from 1987, with the iconic plattenbauten is for me perhaps the most memorable shot in the entire collection. The sheer size and magnitude of the cityscape is very much in keeping with the entirely masculine fascination with size and power of Soviet architecture and city planning, and the night time setting conveys the sense of sinister foreboding which many might associate with the political climate of the time.

To help frame the exhibition, a small two-part prologue is also on display, featuring work from Richard Peter sen. and Karl-Heinz Mai covering the immediate post war period 1945-1949 and the birth of the German Democratic Republic thereafter. These works help to illuminate the sense of tension and uncertainty which was undoubtedly part of the slow division of Germany into two ideologically opposed camps. The scenes of post-war destruction, particularly the rotting soldiers’ corpses found in air raid bunkers in Dresden, are difficult to shake even a couple of days later.

As with so many of the exhibitions at Berlinische Galerie, the lasting impression is a real sense of the scope of change and development with regard to the subject matter. The potentially hammy division of the work into rough, chronological chapters instead succeeds, tying the ideas into clear blocks, and has the effect of framing something of what was involved in creating artistic works in such a regimented society.