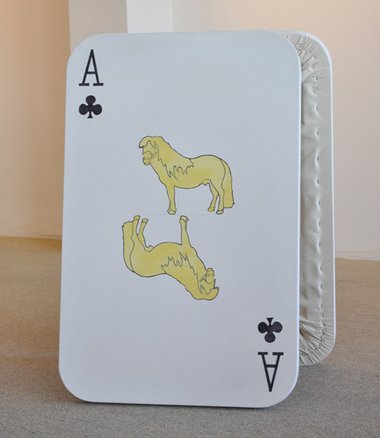 I suppose one could make a case for the paintings being a kind of aesthetic problem-solving based around the formal and gestural elements of painting, colour relationships, spatial distortion, and the interplay between form and ground, figurative and abstract, but I rather think that would be grasping for meaning where the retinal pleasures of the work suffice.

Though born in the Netherlands, Tjalling de Vries was raised in Le Bons Bay on Banks Peninsula. Since receiving his MFA (Painting) from the University of Canterbury School of Fine Arts in 2011, he has exhibited extensively in Christchurch and further afield.

Early in his career, de Vries‘ paintings were mainly existential griselle self-portraits with a Richterian blur and Baconesque smear. More recently his paintings have evolved into a fairly typical trans-avant-garde bricolage of often cartoonish imagery sourced in pop culture, painted flat in acrylic against featureless voids. Sometimes it becomes difficult to work out whether this is a complex meditation on the nature, culture, and process of painting, or a facile and formulaic pastiche of what postmodern painting should look like - David Salle, Sigmar Polke, and whatever else happens to by laying around. I suspect elements of the latter are deliberate, self-conscious and intended ironically. For a while the paintings were livened up with archaeological strata of figure and ground layered up and distressed or otherwise scraped back to reveal glimpses of the images beneath - reaching an apotheosis with Tjalling is Innocent, a huge paper collage mural mounted on the back of the CoCA building as part of Christchurch Art Gallery’s Outer Spaces programme in 2012 and designed to indicate entropy by being slowly weathered away by wind and rain.

Unfortunately de Vries appears to have abandoned this interest in strip mining the surface of the canvas for his Quick Flip exhibition at City Art in Christchurch. In the large paintings Lip Slip and Love’s Off. Both paintings make a central compositional element of the cartoon anvil that so often fell on poor old Wyle E. Coyote’s (shades here of Elizabeth Murray and Mark Braunias) floating diagrammatically against a loosely neo-expressionist ground of warm hues - silhouetted in aggressive brown and red for Lip Slip and a sort of splashed orange juice for Love’s Off. Further layers of Lip Slip are created by a sparely limned, gestural drawing of a man (indicated only by his perfunctory head) being sexually attacked by a nubile bikini-clad Maenad (Lichtenstein meets Polke with a crude Raymond Pettibon-slash-Kerry James Marshall line), an old Kodak colour separation guide bar and a flock of cartoon mail straight out of a Fleischer Studios animation.

The other large painting, Love’s Off, is less complex: anvil, abstract shapes - one of which is decorated in a highly ornamental fashion, and a pair of expressively gesturing cartoon gloves like a pair of fluttering doves. This offers a particularly piquant accent to the overall certainty and confidence of the composition.

The other component of the show are four smaller paintings based on the aces in a deck of cards, divided into two pairs that lean together like very crude card houses. As a discrete series they are called One Trick Ponies - no doubt an allusion to certain tendencies in contemporary art. Each “card” is decorated with cute, cartoonish and slightly Thelwell-esque ponies reflecting each other on a penciled axis. The apparent arbitrary choice of images is somewhat difficult to unpick, except, perhaps, to suggest that they are probably not very important at all and deliberately kept playful. Essentially they are only there to provide the machinery for a formal composition.

Any of the pretentions of high art are subverted by the playfulness of demotic slacker subject matter robbed of all hierarchy and context to simply be an excuse to get paint on to surface. I suppose one could make a case for the paintings being a kind of aesthetic problem-solving based around the formal and gestural elements of painting, colour relationships, spatial distortion, and the interplay between form and ground, figurative and abstract, but I rather think that would be grasping for meaning where the retinal pleasures of the work suffice. I just wish there was more individual character to them, elevating them above a menu touristique of New Figuration postmodernisms. I remain unsure that a true original synthesis has been achieved, but I can recognise the talent which is quite capable of it.

Good job. Every ecosystem needs robust 'predators' to keep the the web-o-life healthy. That boy (apologies for the mixed metaphors) ...

Good job. Every ecosystem needs robust 'predators' to keep the the web-o-life healthy.

That boy (apologies for the mixed metaphors) sorely needed a 'touch up' (as the thugs from my old nabe used to say). He is, and has shown, he is capable of so much more...as evidenced in the truly remarkable F..k-Me-Blind-Why-Don't-You calibre works on linen he exhibited at Ilam a short while back.

While there are respectable passages in the works you write so accurately about - they add up to overall circumstantial evidence of Oblomov-like complacency at play.

The South Island has scarily deep wellsprings of aesthetic/psychic possibility but there's a sort of Hillbilly-like matter of factness and absorption in peripheral pursuits and minor fascinations, down here, that detracts the best and brightest from the almost pathological levels of task absorption necessary for object apotheosis.

Hell, maybe it's better just to get on with a reasonably healthy/happy life than provide a mostly uncaring, unsophisticated, and novelty-distracted art audience yet another bracing tablespoon of aqua vitae. Nu?