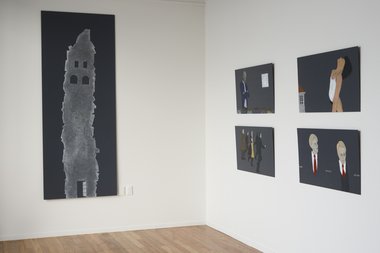 The title for the current show at Ramp, (Waikato Wintec) called Civilia, was taken from Ivor de Wolfe’s 1971 book Civilia: the end of suburban man: a challenge to Semidetsia.

Curator Kim Paton begins by quoting from the text where the author talks about freedom in relation to urban planning. Freedom here means release from restriction, obstruction and bloody mindedness of town bureaucrats.

Wolfe’s complaint is that planners have become overspecialized which has resulted in bad design, bad conception, bad models. This in turn has produced many of the social ills associated with urban life - pollution, vandalism, waste, sprawl and suburban loneliness. That latter term alerts us to the fact that the text was written back in 1971. But Paton argues that the points made in this provocative book are still not only relevant but also accurate today.

The works in the show are the creations of five Wintec students who track some of the themes traversed in Wolfe’s text.

Helen Dowling’s Project City series (acrylic on wood) begins by anthropomorphising an arrangement of suburban houses, piling them up in disjointed fashion into a crowded format which hints at the configuration of a large house or a giant person. Its minimalist treatment helps contribute to the power of the image as it plays with references to the monster, some dark behemoth lumbering up out of the gloom. One thinks of those frottage creations made by surrealist Max Ernst back in the late twenties that presaged in their formations the emergence of Nazism.

Her smaller works from the same sequence have a lighter touch, a more Pop art early Richard Killeen feel - images of urbanites making their way across some nebulous setting. Here the artist has used more colour but the sense of the isolated and the anonymous herd is conveyed; people disconnected, rushing, hurrying or simply quizzically contemplating the conundrums of urban dwelling that recall the “lonely crowd” of David Riesman and others, who delineated the cultural shift in American society, the emergence of the middle class whose identity became defined by a consumerist ethic and whose ‘other directed’ focus served the bureaucratic age, conformity and the corporation where bonds were forged quickly but not deeply.

Alex Kinnaird’s untitled collection of works, using gouache and India ink on paper, takes a wider approach to the topic, looking at the human condition itself by referencing origins that go back to our Neanderthal days. Then jumping to the present, in a work on torn brown paper complete with tape, he creates a collage of images superimposed across a portrait of some violent hoodlum firing a gun at the viewer. History and the evolution of man is quoted again (Stonehenge) juxtaposed against a number of modern references that mix menace with ‘happy families’. This is all about “man” the maker whose world needs the vigilance of Neighbourhood Watch.

That disturbing element is reinforced in a further series of works on paper, a collection of separate portraits whose visage appears somewhat sinister. One of them looks suspiciously like the infamous Moors murderer, Myra Hindley. British artist Marcus Harvey, as part of the Sensation show, 1995, painted a large monochrome work of the woman which caused an up-roar at the time. Kinnaird’s rendition is on a minor scale and I’m not expecting eggs to be thrown as was the case with the Harvey version. She’s lined up with other low-brow ridged individuals, six in total, which recalls the silkscreen mug-shots of Warhol’s Most Wanted Men (1964).

What’s all this to do with urban planning? Perhaps a sly reference to the notion of the city as “concrete jungle”. It’s a ruthless struggle for survival out there, people.

The work of Joseph Scott is the largest, most ambitious and complex piece in the show. Essentially a mural, painted straight onto the wall in part while other elements are works on paper which are pasted into the mural.

The work has that compilation album look, stuff that might have been filched from a workbook and cobbled together where the sum of its parts don’t quite do justice to the whole, or the other way round. But nevertheless, it is an engaging clever and comical piece. There’s a message here too, not a McCahonesque biblical rant but rather a billboard of signs, images and words in cursive rough hand, some of which have laugh out loud quality and it would be a crime not to quote some of the more delectable elements.

Alongside the image of a chinless wonder, is the following. “Yea bro I luv my kah aye in fact I’m jus abowt ta clime inta it wiv my broz we’r gonna git pisst an drive rown town skreemin lyke re-taahds…”

Another piece with the title El D’Rado:

“There are many roads to Rome and likewise there are many roads to this place, WESTFIELD, CHARTWELL Shopping Centre and Community beacon. It’s 2.50 pm, the place is crawling with bipeds and I am here too, for all the shame of it. Right now I’m seated on one of those boxy couches they put in for you to drop on when the place finally breaks your spirit….”

Graphic art mixes with a laid-back comic book style reminiscent of an early political Peter Robinson but with more colourful range and pluralist invention. There’s also an apt art reference to Denys Watkins (Fringe Benefits, 1979) included. Urban life, its economic and political travail are treated with wit and a light touch using a plethora of symbols, codes and script that absorb the viewer with its humour, variation and compositional ingenuity.

Nick Megchelse’s small white framed works (dip pen and ink on paper) revisit the past with a certain wry regret. He creates a quaint nineteenth century nostalgia trip complete with ye olde salon and potted cacti (Saddles and Harness) and classical Estate House that might once have come straight out of the ‘wild’ West. This is ironic wistfulness, pinning for a small town community where church and deputy sheriff’s house once symbolized the wholesome body politic where law and order and true citizenship were the fabric of bone fide public life.

The final member of the group is Craig McClure who presents two paintings (acrylic on wood) caricatures that could picture the agitated urbanite, bloated, stressed, neurotic, gasping for air while strangled by the corporate tie.

This show, full of vim and verve, is a continuation of a series that examines, from a variety of perspectives, the notion of what it means to be “civilized” in terms of a modern urban setting, taking into account the phenomena of suburbs, the absence of community and an economics solely driven by a ruthless capitalist system.

It is clever timing, this show organised by Paton - especially with Hou Hanru's Auckland Triennial just opened. 'If you ...

It is clever timing, this show organised by Paton - especially with Hou Hanru's Auckland Triennial just opened. 'If you were to live here' features an AUT Lab that looks at such planning problems in great detail.