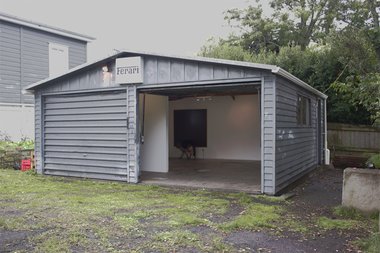 Now van der Wal seems an affable, gentle man whom you can't imagine having a public event where families with children are at risk - despite the invitation's warning. After all, accidents can easily happen, a parent might not realise the hazard, and a child could wander near the putatively dangerous animal. Is van der Wal bluffing?

Bob van der Wal here continues his project investigating the use of paint to denote civic or private ownership of support surface, looking at city council obliteration of tagging or graffiti, and the protection or cordoning off of private property. His two works at Ferarispace examine an extreme method of protecting private property, while also gently mocking a popular way of demarcating the perimeters of privately owned land. He looks at guard dogs and picket fences.

With his two Saturday afternoon performances of Zero Protection (working title), guests were warned via the invitation to stay away from the guard dog in front of a brown painting on a wall. In other words, forget thinking about looking closely at the painting, despite the Alsatian looking docile. In earlier versions the painting was first placed outside the glass of Sue Crockford’s Karangahape Rd window so it could interact with taggers, and later after being recoated was reshown behind a sheet of glass for Caterina’s Riva’s National Contemporary Art Award in Hamilton. So with the guard dog version we get mixed messages, especially considering the work’s title - which is highly ambiguous. ‘Protection’ for what? The painting or the audience?

Now van der Wal seems an affable, gentle man whom you can’t imagine having a public event where families with children are at risk - despite the invitation’s warning. After all, accidents can easily happen, a parent might not realise the hazard, and a child could wander near the putatively dangerous animal. Is van der Wal bluffing?

The work has aspects similar to Vito Acconci‘s 1971 videoed performance Claim Excerpts where the blindfolded artist - while swinging an iron pipe - slowly psyches himself up into beating anybody who ventures down the stairs towards the corridor that he is defending. A video at the top of the stairs declares his presence to potential intruders, and for the first of the work’s three hours he is reluctant to carry out the appointed task. However he gradually talks himself into a state of self hypnosis and by the third hour he is in a robotic state where the consequences of his actions are obliterated from his mind. Nobody was stupid enough to put him to the test.

In contrast the other work Security Dressings is a comical work that mocks the notion of a barrier effectively enforcing a private space. Van der Wal has replaced selected white picket palings from fences bordering various properties along Crummer Rd, with flexible foam ones, or in the case of #66, made a small fence of greatly varying paling heights using swapped pickets. People not part of the art community walking down the street would probably spot the peculiarly buckled pickets intermittently spread along the length of both footpaths. The work is not so subtle that it would be unnoticed.