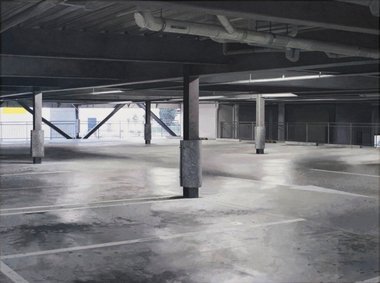 In New Zealand, people like Jude Rae, Johanna Pegler, Mary McIntyre and even to varying degrees Richard Killeen, work within the representational tradition. So the mode is far from dead, but often undervalued or overlooked in conventional painting even when new life is breathed into the practice.

Can any more juice be squeezed out of the literalist genre in current art practice? It’s had a good long run, even in the modernist period with various revivals making their presence felt. Pop art itself, one of the most significant renewals, witnessed a new twist to the old style. One couldn’t get more literal than a representational image of a Campbell soup can. Hyperrealism took that a stage further with the likes of Duane Hanson and John de Andrea.

So what’s left for it to do in a time when conceptualism and video have complete hegemony?

When one gives it a moment’s thought, the idea starts to look slightly ironic because in a very material way video art, for a lot of the time, is itself in the ‘realist’ tradition, albeit, tracing either political ends or deconstructive ones or both.

In New Zealand, people like Jude Rae, Johanna Pegler, Mary McIntyre and even to varying degrees Richard Killeen, work within the representational tradition. So the mode is far from dead, but often undervalued or overlooked in conventional painting even when new life is breathed into the practice.

Ruth Cleland and Gary McMillan are two former Waikato artists whose work falls unmistakably inside the realist fold. Working in graphite and acrylic paint, they both present images - urban landscapes- that mirror with startling exactitude, the reality they choose to depict. Technical virtuosity is what one takes in at first glance, not simply in the construction of forms but also in the nuance of tones, particularly in the graphite studies. Their work is currently on show at the Calder and Lawson Gallery, curated by Steph Chalmers.

As if to demonstrate even further to an nth degree her skill with pencil, Cleland has composed grid formats - abstract creations that possess a fineness and delicacy that is visually startling. They act at one level as foils to the urban pictures, recalling the grid paintings of any modernist, a praxis that reaches back to Mondrian. But they also remind the viewer that they belong to the realist convention where the grid acts as a template guide in the preparatory construction of representational forms. It sets up both an interesting frisson and a historical reference across the spectrum of the history of art.

Beyond that, what both artists manage to pull off is the creation of a distinctive mood that finds itself somewhere in the general vicinity where Edward Hopper meets Edward Ruscha’s urban images. That mood is one associated with urban alienation. Cleland goes for the long shot, compositionally pulling back from her subject so that a good deal of space, often empty street space, is placed between the foreground and her subject - suburban houses - which hover in the distance beneath an enlarged area of bulbous sky. Street signage also acts as a symbol for some sort of a controlling mechanism.

Gary McMillan produces subtle and slightly out of focus views of cityscapes that possess an element of mystery with an undertone of menace or disquiet.

In both artists’ work, the spaces they depict are usually uninhabited. This is the city devoid of people (one recalls the enigmatic paintings of Peter Siddell) producing strange unpopulated places that exude a sterility, even an oppressive and eerie feel, one that de Chirico captured in his metaphysical pieces, but done here without the surrealist distortion. The banal and everydayness of the scenes are overlaid with a sense of unease.

McMillan speaks about his “obsession with light” and that plays a significant part in his work, whether soft and moody or blasted white. Again the link with Hopper is germane. Answering a question about the aim of his work, Hopper was said to have commented, perhaps underplaying it, that he was simply interested in painting light falling on to the side of a building. He was a man for the movies, fascinated with film noir light and McMillan for his part is of the same ilk, deliberately sitting in the front seat at the cinema to observe the particles of light that make up the experience of movie going. Such experience is brought to his paintings in Inland Empire, a title with a little of filmmaker David Lynch inside it. The show as a whole reminds us that there is life yet left in the realist tradition as it explores, in both artists’ work, the problematic nature of modern urban existence.

Whew! I can sleep better now.

While conceding that hyperbole is the mothers-milk of art criticism, I must observe (whilst mixing metaphors) that the reviewer's
claim: "- conceptualism and video have complete hegemony -" is a bridge too far.

Yet here's a spot.
Out, damned spot! out, I say!
One; two; why, then 'tis time to do't;
Hell is murky!
Fie, my lord, fie! A soldier and afeard?
What need we fear who knows it,
when non can call our power to account?
Yet who would have thought the old man to have had so much blood in him?
The Thane of Fife had a wife; where is she now?
What, will these hands ne'er be clean?
No more o' that, my lord, no more o' that;
you mar all with this starting.
Here's the smell of the blood still:
all the perfumes of Arabia will not sweeten this little hand.
Oh, oh, oh!
Wash your hands, put on your nightgown;
look not so pale:
I tell you yet again, Banquo's buried;
he cannot come out on's grave.
To bed, to bed;
there's knocking at the gate:
come, come, come, come,
give me your havnd:
What's done cannot be undone:
to bed, to bed, to bed.

Whew! I can sleep better now.