Before and During Speech 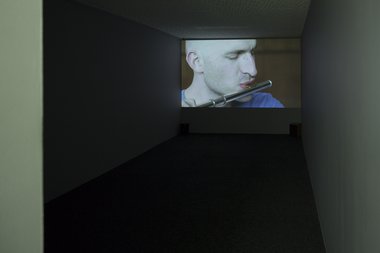 Davidson here presents a complex but tight little show that ponders the properties of spoken communication, particularly mysterious signals that come before words (as material objects) or travel alongside or after them. Hovering indirectly at the centre of this cluster of five artworks - in especially Manon de Boer's film, 'One, two, many' - is a well known essay by the much loved Roland Barthes: ‘The Grain of the Voice', found in 'Image - Music - Text'.

Artspace’s curatorial intern Alex Davidson here presents a complex but tight little show that ponders the properties of spoken communication, particularly mysterious signals that come before words (as material objects) or travel alongside or after them. Hovering indirectly at the centre of this cluster of five artworks - in especially Manon de Boer‘s film, One, two, many - is a well known essay by the much loved Roland Barthes: ‘The Grain of the Voice’, found in Image - Music - Text, and intermittently elaborated further in The Grain of the Voice (interviews) and The Rustle of Language (essays).

In a discussion about the opera singers Dietrich Fischer-Dieskau and Charles Panzera, Barthes writes of ‘the grain’ as the unpredictable bodily component of the voice, not the musical conventions or elements of skill, but an erotic image of how the sound is generated, the mechanics of the throat and mouth, manipulating voice and breath. Barthes’ ideas are tangentially referenced by de Boer when an unseen speaker in the middle part of her film (flanked between a section with a flautist exploring dissonant harmonics and gasping using one long breath, and a section of five musicians demonstrating vocal pyrotechnics in a composition by avant-garde composer Giacinto Scelsi) describes hearing a recording of Barthes’ own voice in a taped lecture from 1977.

This narrator is struck by how loud, deep and low Barthes’ voice was - from a vast space - contained she imagined “inside of a space deeper and wider than the body itself.” She says that there is “a brief moment before each word is shaped, a crack, as if a thought.” The voice is “of a certain volume and body, resonating through the throat, shaping the words. Words are concrete, like objects: there, there and there.”

De Boer’s film provides an interesting underpinning structure for this exhibition, for with a title like Hermes’ Lack of Words, Davidson is prodding the conversation somewhere else, beyond Hermes/Mercury’s usual message-bearing function to other accompanying dimensions that subtly undermine the medium.

In Rosalind Nashashibi’s 16 mm film, Jack Straw’s Castle, the use of a visible and noisy projector is crucial. The distraction is calculated. The film shows part of London’s Hampstead Heath, regularly used as a gay cruising site at night. Instead of noticing the activities of men on the make, it ambiguously focuses on the film’s lighting team setting up scaffolding, tarpaulins and lamps in the middle of the murky forest. There is a confusing mix for the viewer, between horny homosexuals and light technicians, that is paralleled in parts of de Boer’s film with the musicians and their prowling, circumnavigating audience.

William Hsu’s contribution, I kept watching after the island slipped from view, provides visual parts of a conceptual jigsaw that fits together if you listen to an oral recitation, learned by heart and delivered by Artspace staff. The material was about the history of communist and nationalist conflict in China, focussing on Chiang Kaishek, the repressive government of Taiwan, and the biography of dissident Peng Ming-Min. One of Peng Ming-Min’s pioneering publications on international air law (1954) is on display, as are three passport photos of a male member of the artist’s family (I think?) with drawn on disguises, and a digital slide show of expressive hand gestures. One can speculate that the latter has political significance, perhaps some secret coding involving the resistance movement.

Hsu’s aural component locks in well with the projection of the Nashashibi film and Barthes’ theory, because it too is irregular and unpredictable - relying on memory. Another artist, Milli Jannides, fits in too, due to her process of using a quoted line from a novel to start each of her oil paintings, that line usually alluding to a landscape setting or a character’s emotional temperament. In her procedure, inevitably the connection between final image and original generating novel is lost, the painting’s production having an erratic life of its own. So much so that one wonders if such a tenuous link is even worth noting. Is it for example, part of a relationship akin to that of de Boer’s ‘crack’ to Barthes’ spoken language, a visceral - not yet articulated - variety of thought that is preverbal, or is it more like the connection of Nashashibi’s film to her rickety projector, a cause that is a distraction or decoy - where you concentrate on form?

The remaining artist, Eleanor Cooper, has provided five enlarged pinhole photographs and an installation where an arrangement of seven brown possum skins are fastened to a large square of grey carpet. The images of ‘diamond shaped rocks’ - taken with a wooden box using a varied tonal range - imply that the tiny pinhole is also diamond shaped, presenting a strange link between images and method, a fanciful parallelism. Cooper’s possum skins, being brown not grey, also suggest an bizarre kind of humour where gallery visitors absorb not only tactile values, but also colour ones, using their feet, not eyes - perhaps alluding once more to Barthes and his almost subliminal codings: Hermes’ messages without words.