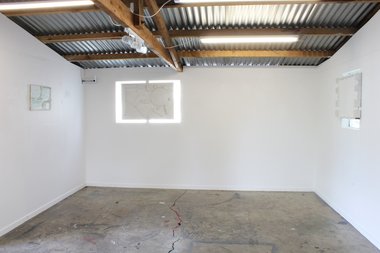 With his use of epoxy putty Arps seems to enjoy an anti-Romantic use of mark making, the texture looking like smeared moist snot or congealed sputum, perpetuating a vaguely disgusting ambience. For paintings they have an unusually cultivated nastiness, so they become ‘icky’ and ‘yukky’ - with of course, no seductive aroma of linseed oil or turps. They look innovative but creepy.

The term ‘White Paintings’ is normally associated with artists like Robert Rauschenberg or Robert Ryman: Rauschenberg preoccupied with incidental effects of shadow or reflected light on a plain white surface, a concept influenced by John Cage; Ryman (usually) focussing on different compositional clusters or textures of brushed on white paint.

Dan Arps‘ display - in his quite different concept of white painting - is very hard to separate from the architecture of Ferarispace’s converted garage. Several of the lumpy, cloggy paintings are positioned across the windows, one is painted directly on a window pane, and another is fastened on the end cross-section of a projecting wall. Apart from the issue of bright light and deep space impinging on the edges of the painting rectangles, the main formal interests of these pale grey (more than stark white) works are mixed in textures, tactility of stringy blobs, transparency of hue, and the use of wooden or hardboard trays for deep (sometimes crenulated) sides.

With his use of epoxy putty Arps seems to enjoy an anti-Romantic use of mark making, the texture (when not like dried plaster) looking like smeared moist snot or congealed phlegm, perpetuating a vaguely disgusting ambience. For paintings they have an unusually cultivated nastiness (it goes beyond the clunky oafishness that’s played on anyway) so they become ‘icky’ and ‘yukky’ - with of course, no seductive aroma of linseed oil or turps. They look innovative but creepy, and allude to the informe as conceived by Georges Bataille.

The most distinctive work here is a large tray on which is glued scattered river shingle and bits of chipboard and plaster that make up a beaming sun or petalled flower. It is set in one of the windows. On its back is glued a sheet of shiny silver foil, and if you walk outside the garage, move round the side and peer in, you can see the painting is attached to a vertical strut between two windows: one pane covered with whitewash or thin gesso, the other not, streaked just around the edges. The foil dematerialises the painting, the reflection initially making it appear transparent - as if you are looking through it from behind.

One other window in the garage just has thin gesso applied to the glass - nothing more - making the white streaky pane itself the painting.

Two other works have colour barely detectable under the thin acrylic paint, the rough scumbling framed by pressed on flaps of squishy epoxy putty. One across a window has a black undercoat; another on a wall has dark green peeking through very thin dribbles of white acrylic wash, the rectangle being divided into three asymmetrical subdivisions.

This is an excellent small show by Arps, tightly focussed and inventive with its in situ tunings. The rawness of his paintings easily suits the irregularities of the shed, and his play with the windows is distinctive. Uncomplicated, compared to his recent Lett exhibition, but more memorable.

Perversely in a Lett virtual space, these extremely palpable tactile (pale grey) paintings allude to a wonderful earlier show at ...

Perversely in a Lett virtual space, these extremely palpable tactile (pale grey) paintings allude to a wonderful earlier show at Ferarispace--from seven years ago. Nice to see them get more exposure... https://michaellett.com/rooms/dan-arps-white-paintings/