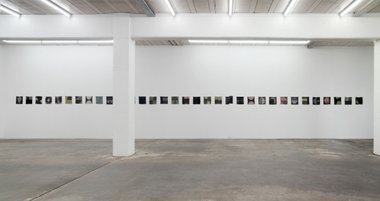 The largest piece here is a row of 33 flannels on the large wall, most of which have been cut in half (vertically or horizontally) and rejoined so that the cut edges are on the outside. Simple geometric forms have been painted on before and even after this process. Trying to imagine what each flannel was before cutting is part of their attraction.

New York-based artist Paul Lee presents here his first Australasian show at Michael Lett, wall ‘paintings’ or ‘drawings’ in the mode in this country connected to the suspended used towels of Campbell Patterson or the arresting skeletal seams of Pip Culbert. In New York their minimalism would probably be linked to the extreme linearity of early Richard Tuttle or the organicism of Eva Hesse.

I am, obviously, here tying his work into an austere formalist tradition, but Lee himself apparently is more interested in Japanese thought, particularly the concept of mono no aware as elucidated by the scholar and doctor, Motoori Norinaga (1730 -1801), a Shinto notion that explores the emotional intensity (pathos) of handled or worn objects, and a sensitivity to the passing of time.

However the formal aspects, Lee’s inventiveness with limited, domestic, ‘body-linked’ materials, are what give this exhibition interest, for any sense of pity or sadness mostly seems exasperatingly subjective. Drying and washing fabrics (towels and flannels) are cut into, decentered, reinforced, shuffled around, layered over, removed or painted upon.

The large blue and yellow pieces look like two huge towels, each divided into five ‘negative space’ partitions, as if used only on working days after each day’s labour and then discarded. There are tiny gaps at the tops or bottoms of the vertical divisions. One other item, with eight hand towels and eight black light bulbs in a frame formation, implies drudgery and a dulling of the mind - a diminishing of hope and imagination.

One striking work is Untitled (black solid/negative) where the delineating borders of three ‘stacked’ up, horizontally aligned towels are covered over by a hanging flap of towelling the same size. It is as if the three spaces are a kind of portal, or wide ladder, to some receptacle containing secret wisdom kept hidden behind a curtain.

The largest piece here is a row of 33 flannels on the large wall, most of which have been cut in half (vertically or horizontally) and rejoined so that the cut edges are on the outside. Simple geometric forms have been painted on before and even after this process. Trying to imagine what each flannel was before cutting is part of their attraction.

As for their meaning - if you believe art must have meaning - an extremely wild interpretative guess might be that each face-cloth represents a year in the life of Christ and that the abstract images represent the miracle of St Veronica and Jesus’ visage after she wiped his face. Trying to fit this in with the mono no aware concept does seem more than a little tricky, but a religious synthesis is possible.

Nevetheless, Lee‘s interest in mono no aware seems strange when applied to objects like large towels that have been radically altered or transformed. If that were not the case, and they were kept ‘found’ it would make more sense, especially if you believe humans affect the objects they own. However the negative spaces here are what seem symbolically important, absences that command attention, rectangular gaps that denote compelling presences.

Be that as it may, despite differing intentions, the rectangular ‘negative’ works don’t hold up as well as for example, Pip Culbert‘s formally related seams project - for visual appeal. The Washcloth Stills though are very intriguing. Their layering of geometric imagery on towelling fabric, and the resetting of separated halves, creates a complexity that pulls you in. It makes you curious about the process, and the sequencing by which the elements were added. The procedure is palpable, the speculation enticing.