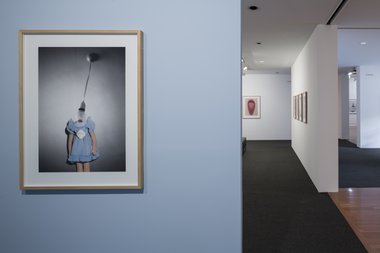 The fuss is understandable for the range of Brassington's imagery is astounding - much of it rich in historical references to European art and film. Her techniques vary enormously (a lot of montage), the works are made over the thirty years that span 1980 to 2010, and there is a consistent sensibility - an understated sense of Lynchian horror that permeates her faces, figures, walls and spaces.

Juliana Engberg is a well known figure in Australian art circles, a curator hugely admired for her intellectual acumen and ambition. She is the Director of next year’s Sydney Biennale (opening in March), current Artistic Director of ACCA in Melbourne, and fondly remembered here in Auckland for Humid, an international show she organised for the New Gallery in 2002.

Recently she put together Á Rebours ‘(Against the Grain’ or ‘Against Nature’), a touring Australasian survey of the Tasmanian surrealist photographer, Pat Brassington, recent recipient of the Bowness Photography Prize in Sydney. Over the Christmas holiday / New Year period this will be on display at Te Tuhi (the only New Zealand venue) - and is clearly a major event for Auckland. Almost the entire contemporary art section of Te Tuhi is devoted to it: five rooms. It is a treat to see all that space devoted to the work of one person.

The fuss is understandable for the range of Brassington’s imagery is astounding - much of it rich in historical references to European art and film. Her techniques vary enormously (a lot of montage), the works are made over the thirty years that span from 1980 to 2010, and there is a consistent sensibility - an understated sense of Lynchian horror that permeates her faces, figures, walls and spaces. This is mixed with a savvy that acknowledges the power of sexual desire and fetishism, that includes a mischievous inclination to tease the viewer’s (male or female) gaze; a toying seduction that also disgusts. Aspects of Freudian psychoanalytic theory - like the Unhomely - are effortlessly incorporated.

Artists with connections to her practice in Aotearoa would include Hipkins, Noble, Todd, Peryer and Fiona Pardington. Yet these are photographers and Brassington also has a pronounced printmaker’s sensibility within her constructed images, linking her with someone like Bea Maddock. Plus like some watercolourist she uses a delicate cloying pink with surprising abundance. Not denoting romantic love or femininity; more as a means of irony. An ambiguous irritant.

As you move around Brassington’s show within the tightly designed spaces - a blue grey decor is constant for both Australia and here - the mood and emotional temperature changes with the different image combinations. Interconnected networks emerge from within the 84 images linking the rooms; a mix of analogue and digital, scanned and photographed. We see many scattered and varied reoccurring themes: open mouths, figures in mid air, fish parts, arching bodies, shimmering wall paper, hemlines and crotches, incised vertical wounds and flapping curtains. Artists obviously referred to in these photographs include Man Ray, Boyd Webb, Louise Bourgeois, Jacques-André Boiffard, Lee Miller, Brassai and Max Ernst. Surrealism is a valued part of Australian art history, but usually it is the Surrealist painters that get the attention.

Possibly the most unusual works here seem to be of the artist’s own family or grandchildren, taken from one domestic setting and Photoshopped into another, or interacting with strange props, like being wrapped in cardboard and taped to a wall, or clambering up through trapdoors. The models here, strangely ordinary, seem breezy and perky, their mood quizzical not anxious - as if involving the joy of discovery, something that’s fun not ominous. The ‘cut and pasting’ is so obvious, with the image and its background not seamlessly blending, that the self-proclaimed ‘artificiality’ becomes an essential ingredient. At the other end of the mood spectrum are scenes that look like ‘primitive’ melodramatic stills from movies made in the thirties, black and white blood-soaked scenes depicting medieval violence, arranged in a gridded formation. Quite a contrast.

When a visitor looks at a curated show and then examines the range of options that the curator has picked from, it is inevitable that the line up reflects the idiosyncrasies of the selector’s taste and that the visitor think he or she would do it differently. Consequently some of Engberg’s picks I find too designy, too bland and a little like décor magazine spreads. They just seem on the ‘empty’ side while there are unincluded stunners on the Stills site I would have thought were sure bets.

That though is really a tiny quibble because this show is a wonderful introduction for New Zealanders to Brassington‘s work: it’s essential holiday viewing over the coming break. Plus the catalogue is dirt cheap at $10, with great images and essays by Engberg and Ted Colless. Before you put on your shoes and rush to your car, here are two other essays on Brassington by Ashley Crawford to whet your appetite.