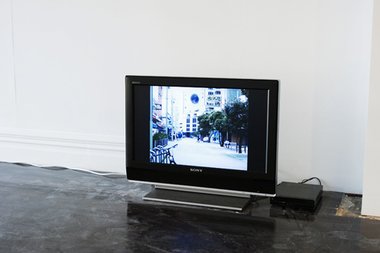 Injected into Valentine's video is the deliberate plant of a jogger who runs the same continuous short loop, coming into filming view every minute or so. What the viewer notices is that the runner has to slightly alter his route each time to take into account the changing nature of traffic in the congested area, demonstrating how this so-called ‘shared space' is not so people friendly.

Pop-ups, art gallery exhibitions that take advantage of the economic recession and retail’s move to the suburbs, set themselves up in empty shops, have become a recent phenomenon in New Zealand cities. Hamilton has seen a few, the latest parking itself in the middle of city - Garden Place - in a former commercial space that once hummed with life.

We’d Make It, If We Just Held Hands is the deliberately cheesy title reflecting on the central theme the four different artists traverse in this show.

Hannah Valentine in her video of six minutes and forty three seconds plays with the notion of “shared space”, a recent urban response to the reality of car culture that has dominated city life and social interaction in the past to the detriment of the inhabitants. Space is often not user friendly in high density metropolitan areas and experiments in New York, China and elsewhere have shown that small changes in design dynamic can have very profound and positive effects on human use of social space in the city.

Her short video, Shared Zone, 2013, documents an experiment of her own in which she records the flow and movement of people and traffic from the same location in Auckland near the waterfront. Injected into the equation is the deliberate plant of a jogger who runs the same continuous short loop, coming into filming view every minute or so. What the viewer notices is that the runner has to slightly alter his route each time to take into account the changing nature of traffic in the congested area, demonstrating how this so-called ‘shared space’ is not so people friendly.

Her second work, Issues of Verticality, 2013, is a companion piece which deals with a similar urban problem, that of overcrowding which forces people to live cheek by jowl at higher altitudes in ever decreasing areas of space. Her scaffolding like construction, reminiscent in part of the iron cage creations of Giacometti, or the sculptural work of Ludmila Seefried-Matjekova, depicts in abstract form this battery hen like experience.

Keeping with the urban theme, Karl Bayly has done what Carl Andre did before with a pile of bricks, only done it with a stack of Harcourt signage posters. Called Untitled (gifts), 2013, it is a direct reference to the process involved in hiring the exhibition space itself, a somewhat protracted and problematic affair. However it also becomes a quotation in testimony to urban transformation, the course of which is not always propitious. Though crisp edged and pure white in presentation, the work comes with an elegiac touch that speaks of transience and temporality. A low sheen white paint almost obscures the lettering of the signage but the visual language still seeps through. Thus the notion of sale and all the inherent human sadness that that sometimes epitomizes is put under erasure, although not quite, because capitalism is the dominant mechanism here, infected as it is with careless and ruthless practice.

A second work by Bayly, Scotia Utopia, 2013, presents simply as a piece of white painted wood affixed to the ceiling of the exhibition space to mimic an ordinary scotia board. One additional element is a light concealed directly behind it, beaming perhaps some kind of signal or missive of hope. The utopian reference connects to the idea of showroom ambience where the lightening does little other than create some staged and contrived setting that hypes the décor. This somewhat dysfunctional display pokes fun at every engineered affectation employed by the consumerist world.

Ben Clement (recent graduate from Elam and former Snake Pit exhibitor) is interested in how information is processed and mediated in the world of commerce. Just wave and Go, 2013, is his latest example using an altered readymade involving inkjet print on acid-free tissue which directly references the new “Tap and Go” card ad (made famous by a certain famous New Zealand All Black rugby player). It jettisons all the advertising text and simply leaves the slightly absurd gesture of a repeated clenched hand, looking like some manic gesticulation or banal sequential motion, something like that which the Dadaist Duchamp made infamous in Nude Descending a Staircase. Wordsworth’s memorable line, “Getting and spending we lay waste our powers” springs to mind as one observes the disembodied and objectified hand floating in space.

Sam Thomas, also a Snake Pit exhibitor, a co-founder, makes up the quartet. The work called Myth Busters, an assemblage of a plastic blow-up world globe attached to a fly zap machine takes in wider parameters (tapping into the television show of the same name) and fits more comfortably with the tenor of the rest of the show. Macho myths and capitalist myths along with all the other ones we live by are thus metaphorically zapped. Apparently a real blowfly flew into the contraption and felt the sting of the machine, but the creature was only momentarily stunned and minutes later recovered and flew off to pester and spread disease. Another metaphor re-enacted. Do ingrained myths ever die?

His Toast Masters 1-5, 2013, is another play on words that sees an oblique critique of the wider Western world conjured up by the connotations implied in the title. These five works are drawings created by using black ink on Perspex and have the finished look of woodcuts or tapa design. Thomas has recently returned from a residency in Rarotonga which may account for the style and subject of the works. The imagery, which in its form contains echoes of Philip Guston and Keith Haring, is politically suggestive while at the same time comic. There’s a ridiculously layered toasted sandwich in the bunch, and also a reference to ivory poaching in another - along with a dig at tourist economy with a series of crashed planes torpedoed into the side of some tropical island.

If we all held hands the world would be, etc. This sharp little show has popped up in the middle of a city, with things to say about city life and living in an increasingly commodified Western world.