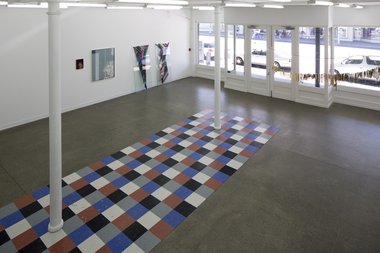 Looking at Basher's very brief essay this rich assortment would appear to be very much about the consumerist themes ('…the tenor of sunsets, long cocktails, and holidays drawing to a close…') often present in his practice, as well as shrewdly repositioning his labours in relation to key figures in New Zealand art history - yet the project is far wittier than just blatant self promotion.

In this exhibition Martin Basher has invited ten other artists to contribute a dozen works to accompany one of his own. It’s an engrossing show for it presents a number of New Zealand and American artists never or rarely seen in Auckland before. The event coincides with the occasion of his wedding and so the Lovers title can be interpreted as applicable to various paired items and some interlocking spaces and forms.

Looking at his very brief essay this rich assortment would appear to be very much about the consumerist themes (...the tenor of sunsets, long cocktails, and holidays drawing to a close…) often present in Basher’s practice, as well as shrewdly repositioning his labours in relation to key figures in New Zealand art history - yet the project is far wittier than just blatant self promotion. In fact like his wonderful multi-levelled installation in Freedom Farmers it references the fiscal, art history, mysticism, carnality, optics, and romantic devotion.

Basher’s own painting is a regularly striped canvas partially overlapping a large irregular vertically barred collage so that the similarly coloured shimmers exploiting ‘buyer conducive’ colours are aligned at different angles. The tightly controlled formal aspect of his contribution is echoed in two nearby Gordon Walters on the wall and the patterned colours of the David Scanavino on the floor, while the crazed, abandoned side of his work is repeated in an also purple silkscreened collage by Tamar Halpern with out-of-register dot formations, Wool-like smears and Warholesque fragments.

One of the highlights of the show is (L.A. artist) Kevin Appel‘s Untitled (Rebar 15), a highly complicated painting of exposed snap shot fragments, vertical bars, dense fields of tightly screened green dot clusters and - from a distance - apparent reflections on a glass surface. This richly layered, extremely precise work is intriguing, whether scrutinised close up or experienced from a distance. Its complexity draws you in because it takes a lot of time to grasp the final structure and the mark making /shape assembling process.

Next to it, leaning along the wall, are two fabric pieces by Amy Howden-Chapman sandwiched between large glass sheets. The angular cloth shapes are made like quilt covers, their strata of glowing coloured strips butted tightly together. Overall they look like wonky lapels from a huge ornate jacket that have been separated, but in their glass laminations, left juxtaposed as a linked pair. The fabric plays off against Scanavino’s tiles and the glass reflection of gallery lights, the Appel.

By the gallery entrance Kate Newby has a long set of suspended ceramic wind chimes, well over a hundred multi-glazed hollow bars (of varied shape) hanging vertically from a parabolic cord. When gently tapped or shaken these brittle pipes emit gorgeous flurries of delicate notes: an intimate tinkling prayer to the Great Beyond.

Also spectacular is David Scanavino‘s salute to Carl Andre and Marcel Duchamp, a grid of coloured tiles with New Zealand or American coins embedded at each end - akin to Duchamp’s random ‘nine shots‘. Near these insertions the gallery’s two columns pierce the flat ‘carpet’, as if two vertical fingers wearing wedding rings.

Another ‘tip of the hat’ to Andre is Peter Nicholls’ 1983 narrow archway made of stained, stacked and pegged matai blocks. Numbers are cut into the ends of the slotted and tongued chunks, starting with multiples of eleven and then switching systems upon reaching a hundred. In this context the digits take on an optimistic reference to a happy and long lasting partnership.

Brie Ruais’contribution is a silvery two part ceramic work that appears from a distance to be made of heavy glistening steel. The two parts are vaguely ring and circle shaped, made in churned up spiky configurations kneaded with the fingers, and exhibited some distance apart, with three other artists’ work in between. Again, these can be interpreted as alluding to a wedding ring and finger, tying in on the opposite wall a yellow flower painting by Layla Rudneva Mackay - a Texas posy as a gift of love.

Lovers has a strange hang, with unorthodox wall ‘gaps’ in its layout and quirky corner compressions. The overall impact however of Scanavino’s dominant tile work optically resonating with the Basher and Howden-Chapman, and the intricacy of the parallel Newby strings springing off the fine curved lines of a small Whitney Bedford, makes any visit to this show quite memorable.