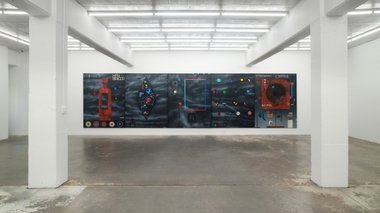 A work made originally for the Hanging Sky survey, Shane Cotton's The Haymaker Series 1 - V features here five large panels that could work individually as separate paintings. However when butted together in a specially devised composition they have great formal and ideational wallop, two brown ‘hollowed out' wooden forms serving as bookends for the wispier, more ethereal, grey fields presented between, and communicating across space and time.

A work made originally for the touring Hanging Sky survey that recently went to Brisbane, Christchurch and Wellington, Shane Cotton‘s The Haymaker Series  I - V features here five large panels that could work individually as separate paintings. However when butted together in a specially devised composition they have great formal and ideational wallop, two brown ‘hollowed out’ wooden forms serving as bookends for the wispier, more ethereal, grey fields presented between, and communicating across space and (possibly) time.

On the left we see a painting of a pou carving by the late Arnold Manaaki Wilson, a greatly admired sculptor with a survey that has just opened at Auckland Art Gallery. Here in Cotton’s painting Wilson’s He Tangata, He Tangata calls ‘Hey Maker’ across the wall to the furtherest righthand panel, representing Io the Supreme Being with a huge all seeing eye set in a kind of turntable or speaker cabinet. The left hand panel is entitled Haymaker, the colourful term for a levelling punch, a reference it seems to art of the most profound kind - both mentally and bodily significant in its impact, and the ultimate goal for any artist with spiritual aspirations like Cotton. The making of the artwork takes on a sacramental quality, its manual construction becoming a kind of prayer.

The three middle panels in this context seem to be intermediaries between the material world and the divine. The far right painting, Staging Post, with the all seeing eye, seems to be a temporary zone where the Supreme Being collects and sends up its ‘mail’, like a farmer’s large letterbox that is used for grocery delivery where the farmer is still at one remove. Around it are references to other artists’ works (such as those of Parekowhai and Robinson) that provide an unexpected Buddhist flavour, is if they are Bodhisattvas holding back from attaining Enlightenment. This curious inflection is accentuated by the second panel that shows a vertical diamond full of Kandinskylike circles. Perhaps - to continue this unorthodox line of speculation - the second panel refers to the famous Diamond Sutra and its themes of impermanence and avoiding attachment.

The third panel shows a sculpted clay head on a stand looking through a coloured frame - labelled SEE.R, pointedly not SEER - and seemingly symbolising the limited conventions of ‘art’ thinking, seem here as disembodied. Below the frame is a silhouetted clipper representing the importation of western aesthetics.

On the fourth panel we see a gridded formation of eighteen mokomokai mummified heads that may reference the well known photo of Horatio Robley and his infamous collection. Each one has been splattered with a simple Baldessari-style coloured shape, as if a sarcastic mockery by ‘high art’ of Maori culture. The imposed coloured forms seem to be like squishy chewing gum that has insultingly attached itself to the embalmed tattooed faces, a slowly oozing goo.

Conspicuous on two panels are the ancestral spirits (the buffeted and stressed dark blue birds) and Nolandlike targets (competing contemporary secular distractions) trying to knock them out of the ether. There are also surface contrasts: with some of these paintings, the paint application has a surprising rawness and manual tactility that intriguingly stands in high contrast to the otherwise slick finish and urbane use of airbrush.

If you like attempting to decipher enigmatic symbolism, then Cotton is the guy for you. Not however if you find these sorts of trope vaguely mediaeval in tinge, in the tradition of say, Bosch, and passe. There is something curiously old fashioned about his mindset, his methods of communication. I don’t mean his underpinning mystical preoccupations (which could be fashionable now, in these times when irony is banished) but his use of linguistic correlations with desired intentions behind the craft. Not the particular purposes he works so hard for but the suggestion of coding and its pedagogical motivation.