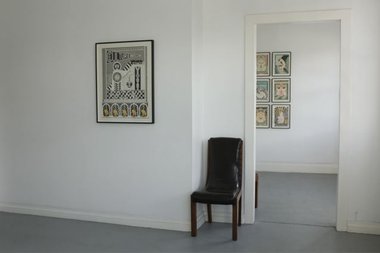 Johnson is an extraordinary blotter for soaking up eclectic influences, yet the resulting synthesis that she ends up with (from copious and disparate illustrative sources) is always distinctly her own.

Jess Johnson
Ratholes in the Babylon of Information

Melbourne artist, Jess Johnson, has shown her work about three times in major New Zealand venues: once last year in the Utopian Stumps booth at the Auckland Art Fair; an installation a couple of months earlier at a Christchurch Art Gallery presentation; and an earlier still New Artists show that Emma Bugden organised for Artspace.

The current Ivan Anthony show is an excellent showcase for her amazing drawing talent, with a new digital film added. Johnson is an extraordinary blotter for soaking up eclectic influences, yet the resulting synthesis that she ends up with (from copious and disparate illustrative sources) is always distinctly her own.

In this show, the film and framed drawings are fascinatingly different in their accentuations. The film, Mnemonic Pulse - though an incorporation of elements taken from her drawings, digitally incorporated into an urban cityscape and given digital three dimensionality - is a sort of pastel mutation of Charles Burns (sci-fi elements), Art Deco architecture, and Yellow Brick Road ambience.

In contrast the pale and intricately detailed drawings, with their dominant symmetry, carnival lettering, images of torture and vomiting (repeated like a frieze and decoratively stylised) and Yellow Submarinish blob/animal vulva/testicular faces, are (of course) flattened - plus they have lots of figures that seem to have been taken from Maxfield Parrish, with motifs from Milton Glaser. There are discordant pockets of photographic collage as well.

The film, a collaboration with video artist Simon Ward, intrigues with its movement through buildings and monuments, and dreamy throbbing music, but the crisply linear, rectangular drawings with their Edwardian occult feel require a different sort of attention. Mental drifting won’t do: you have to concentrate, scan them carefully, link up the words and then connect their sentiments with the images.

The horizontal lines of repeatedly tortured youth, or hanging severed heads, mixed sometimes with stacked-up acrobats or gymnasts, seem to be about desensitisation and how everything becomes entertainment: about looking at TV and pondering (in Nick Cave’s words) ‘some ordinary slaughter…some routine atrocity’. With a work like WWW she is lashing out at the web and its moral indifference, but (as with almost all the work) mixing it with a sardonic commentary on a post-structural subject where the Self is created and dominated by ‘natural’ cultural forces.

Despite her obvious sophistication, for me there is also a connection between her work and that of Henry Darger and Scottie Wilson - even though Johnson is nothing like an ‘Outsider’ artist. The pleasure and excited curiosity to be found in her invented head shapes mirrors not only that seen in their images, or also, for that matter, the work of ‘mainstream’ artists like Elizabeth Murray, Jim Nutt, Gavin Chilcott or Mark Braunias.

What is unsettling is Johnson’s use of whimsy and ornament, the devised emotional tone of her production. The delicacy of her colours, the complex geometric patterns, checkerboard perspectives and breezy effervescent feel collectively create a quandary. Does her alluring style undermine her strange ‘Amnesty International’, Forces of Darkness synthesis, or is it a cunning bait to attract her audience where moral content is her prime motivation? Or is it motivated by other possibilities, with the seemingly obsessive drive to draw and cover paper with lines coming first as a primary impulse - with ‘heavy’ images added later to provide gravitas? If so, would it matter anyway?