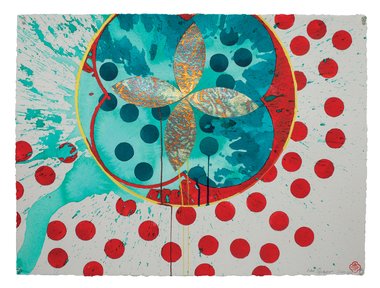 The artist here loads on the symbolism as well as loading on the paint. More is more in this universe of dots, cosmic circles and half circles that vibrate with a cornucopia of hot colours. Clash of opposites is one of the recurring elements where depth and flat surface play off against each other, where chaos and control vie for position, where metaphysics and the physics rub shoulders in a world both sensuous and strictly mathematical.

Inside the secular city religious art is often regarded with a certain quizzical ambivalence, unless it’s indigenous and then it’s indulged. Colin McCahon in the late forties got away with it because at the time, despite Auschwitz, we were essentially, but somewhat incredulously, still believers. It wasn’t until the sixties that secularism began to bite. This saw the West turn its face away from things otherworldly and embrace a world that favoured hedonism and political activism where God was dead and rock music was alive and pumping.

Just like the British who don’t do religion in politics, similarly New Zealand seldom does religion in art. McCahon is the big exception and New Zealand born but New York based Max Gimblett, is another with his Zen inspired creations, (though some might argue that Buddhism is not a religion). Significantly Gimblett left New Zealand in the sixties and ended up in the more religiously inclined America where he established his practice, working in the abstract tradition from the early seventies, becoming an American citizen in 1979.

During this period with Christianity an exhausted cultural force, some in the West looked eastward for spiritual supplement, part of the New Age movement that saw Buddhism, Hinduism, Wicca and whatnot become a source of transcendent comfort. The Beatles trip to India in the late Sixties generated some of this mystical fascination while Robert Pirsig’s Zen and the Art of Motorcycle Maintenance (1974) and Jonathan Livingston Seagull by Richard Bach (1972) helped it on its way. In this context it is thus not too surprising that Gimblett’s practice took a similar trajectory, working in a climate where all is united to everything in one great monist embrace. The dawning of The Age of Aquarius and all that.

Historically this shift represented a great turn inwards, looking for personal contentment and a retreat from fractious political engagement, a generational move that was characterized by Tom Wolfe, in terms of the period, as the “me” decade.

Gimblett emerged out of this milieu a Buddhist monk and in his art the quatrefoil, the four loped shape of overlapping circles, (an ancient pagan symbol of good luck and magic), became his signature style in which to present his spiritual predilections. For several decades he has rung the changes on this format which for him represents among other things something he calls “the age of quaternity” or the fourth level of consciousness, of which, according to Gimblett, there are twelve. This hierarchical structure is standard stuff among all general schema related to mythical theories linked to the ages of humanity - Hesiod proposing five, the biblical book of Daniel producing four, all based on metallic symbolism. Later writers played with the numbers while Madame Blavatsky’s theosophical doctrine in the nineteenth century tacked on to Darwin’s evolutionary findings an age of spiritual regeneration which Russian artist Kandinsky and others enthusiastically took up.

Gimblett has something of the same partialities; indeed he seems to have appropriated one of Kandinsky’s ciphers from his Bauhaus days, namely the checkerboard pattern and used it as a backdrop in some of his recent pieces.

The exhibition currently showing at the Calder and Lawson Gallery at Waikato University Academy of Performing Arts is a series of Gimlett’s latest works on paper (twenty two in total, all generously donated to the university collection) and goes by the grand title, The Universe. His circles within circles do have a slight planetary look but this is obviously not the artist’s concern.

Spiritual enlightenment and the evolution of consciousness has always been Gimblett’s program and he specifically refers to this, both in a work called Pentafoil Dance and in an interview curator Steph Chalmers conducted with him prior to the show. Answering an enquiry about the introduction of the new five circle format, Gimblett replied: “It’s an attempt to move to five from four according to the Twelve Dimensions of Consciousness. It is not easy. We are living in an age of quaternity, moving towards the Transcendental Fifth”. This is typical theosophical fare which Blavatsky borrowed from various Eastern sources and reconfigured for the Western market.

Gimblett’s usual approach to his work is evidenced here where we see various explosions of paint violently thrown onto the paper that splatter like some wild Abstract Expressionist release of energy. This ground is then worked on with a layer of hard edged precise forms - circles abutted to form the ubiquitous quatrefoil which might be then overlaid in some cases with other four-way motifs like the magic knot, configured by the interlacing of vesica piscis forms, (linked to the mystical Kabbalah or yonic symbolism) or versions of the cross patee, a form of the cross in medieval heraldry, significantly shaped within a square. All this sacred geometry sometimes sees checkerboard forms and gridded dots floating sideways in and out of the mix. Dribbles of paint in good Bill Hammond style are also employed in this maelstrom of symmetrical configurations, saturated with colour, gold leaf and globules of leaking ink and acrylic washes.

The artist here loads on the symbolism as well as loading on the paint. More is more in this universe of dots, cosmic circles and half circles that vibrate with a cornucopia of hot colours. The inclusion of Lichtenstein look-alike Benday dots adds a kind of Pop art feel to the potpourri of forms, dyes and shades. Clash of opposites is one of the recurring elements where depth and flat surface play off against each other, where chaos and control vie for position, where metaphysics and the physics rub shoulders in a world both sensuous and strictly mathematical.

Whether the secularist reads the message with a willing suspension of disbelief or simply indulges in the luxurious feast of shapes and vibrant hues is a matter for individual taste. But the show is certainly a riot of colour and controlled forms except for the more minimalist black and white works, made up of roughly painted circles and smiling skulls, a reminder of human impermanence that brings with it lessons in Buddhist detachment.

Gimblett also has an exhibition of similar works on canvas concurrently showing at Aesthete Gallery, Hamilton. Both shows gorge the senses with their sensuous rush of colour and eye-popping lavish dance of shapes and notations, but it’s here that a certain puzzling element arises. All this sumptuousness, not surprisingly, incites a certain whelming desire which seems to work against the Buddhist notion of the negation of desire. A curious contradiction.

The journey to Hamilton from Auckland has been dramatically shortened by new roads built over the past ten years, and ...

The journey to Hamilton from Auckland has been dramatically shortened by new roads built over the past ten years, and at considerable expense,the Tron is half an hour closer. The Gallagher Performing Arts Centre is off Knighton Rd, through gate 2b (a theatrical reference no doubt) and along a short, violet scented path past an ornamental lake. The calm induced by the surroundings slightly overtaken by the need to piss, so the last 50m are taken at a trot.

The toilets are immaculate, new, modern, alive with jazz flute lift music, it feels like someone else's world. It is redolent of the Japanese 'Sound Princess' audio systems that cover the shame of urination in public places.

It turns out that the portentously named Calder Lawson Gallery is really a corridor, Nice walls though. As I square up to the unabashed title work, 'The Universe', there is a hoorah of a noise, six timbered reports followed by a chorused, guttural challenge, I am awed by the power of this jazzy watercolour but then grasp that it is kapahaka time in the Gallagher, we view the entire exhibition with a wonderful soundtrack of song, slap, chant and stamp. The exhibition's very own Sound Princess.

I may have raised this before but any Max Gimblett exhibition immediately produces in my mind's eye an image of his cheeky little face with a cigar. Now the stogie is a central Noo Yark motif but unfortunately it seems to conspire with Max's' flung paint to produce a posit coital image. There are some classic money shots in this suite of paintings, the yellow one being worth the price of admission alone.

To stay with the spill, the accidental, the gestural, for a moment; there is a you tube clip at present showing a young hipster Queequeg, with peak beard, on a skateboard with a tray of Starbucks. He high fives a fellow static hipster inducing a speed wobble and the inevitable wipeout. It's the next bit that applies to the show, Queequeg beats his skateboard against the concrete until it breaks, cursing the universe for his uncoolness and beverage spill. I never get this feeling from Max's splats, they are presumably similar in aesthetic but polar opposite in passion.

Then there is the colouring in. Peter invokes Kandinsky, I say these paintings more resemble the doodling on the back of the fifth form maths journal: there is some dire, cackhandedness on display here. That said, it is very honest mark making but the surprisingly unskilled paint changes the colourful to merely gaudy and the cosmic to colouring in. It brings to mind the stoned, teenage copying of 1960's album covers, yellow submarine, Yes, King Crimson et al.

Max may be trying to take the quatrefoil to the next level but I'm not sure that is an artistic idea, more a religious one, which makes that journey deeply personal and like the parallel sexual analogy something that should be done in private.