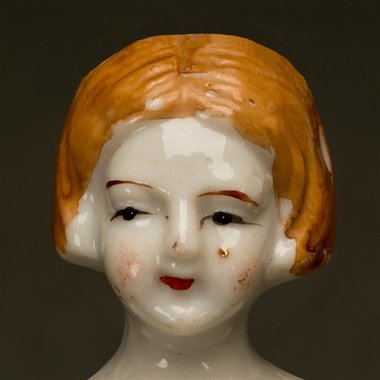 With the small figures made huge, we see the expressive potential of what is essentially (due to lack of control) inadvertently hamfisted paint application. The tiny brush used - despite its delicate tip - is still too gross to be effective within the chosen scale. When painted lips, for example, are wonky or compacted there is a particular personality type (or mental state) suggested by the tremulously edged, morphological asymmetry.

Boyd Webb
Images from the Cusp

Boyd Webb is best known for his amusing stage set-like dioramas and comical props that were constructed as temporary sculptures to be photographed, as well as (later at Crockford) images of transparent inflatable toys that when deflated and documented, had a disturbing sense of the uncanny.

This new series of fourteen photographs at Two Rooms - like the inflatable ducks or jellyfish - again focuses on found objects, sometimes birds (porcelain budgies, fabric and fur roosters), but mostly tiny china dolls and iridescent fishing lures. The diminutive he enlarges so that once barely detectable detail is now put under scrutiny, and unstable metallic colour on cast fish looks like part of pixilated prints - not photographs. The colour is on and not through the paper picture plane.

In fact, with the lure images the emphasis is on the sensual and spatial properties of colour and reflected light. Many of the titles in this show emphasise photograph as artifact, not as illusory window for a narrative. Instead of stating a subject they baldly state the cropping of images (Beakless, Tailless, ¾ Fish), dominant colour (Blue, Rouge, Black, Auburn) - emphasising adjectives not nouns.

In some ways the animal images are like Don Driver abstractions with their play of textures, surfaces, pattern and colour. You start to ignore the creature being represented and focus on the treatment of colour, surface, grid and shape, and the slyness of Webb’s manipulation.

With the small figures made huge, we see the expressive potential of what is essentially (due to lack of control) inadvertently hamfisted paint application. The tiny brush used - despite its delicate tip - is still too gross to be effective within the chosen scale. When painted lips, for example, are wonky or compacted there is a particular personality type (or mental state) suggested by the tremulously edged, morphological asymmetry. Identifiable character types emerge with smeary eyes, smudged and bruised cheeks, shiny speck-flicked complexions, and lopsided hair. In these rotund, softly contoured physiognomies there are no sharp angles or precisely delineated features. Nevertheless the approximations achieve something significant: there is an implied layer of raw emotion, an overt hint of tragedy, a powerful sense of melancholy - even pathos.

Other works play on humour rather than tragedy, albeit sometimes with black humour. Two or three knotted eels might reference the notion of the rat king where a group of rats seem to get their tails so entangled they become immobile and eventually starve to death; a fabric rooster incorporates thick fur that possibly came from a slain possum; a porcelain budgie could be a sort of china doll that is also an avian pet.

Webb’s versions of these birds, people and fish remind us of the original absent referents, the authentic foils for the artificial replicas, and how fooled we might be during our first viewing. The show is a meditation on artificiality and surface - surface of paper, eel skin, porcelain and cast metal. Ambiguous found images that are reflected, evanescent, absorbent and stable. Qualities of light and opaque form.