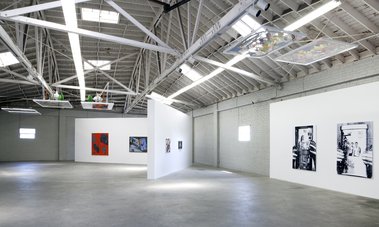 Although seemingly banal, these paintings casually divulge motifs handled by Boshier throughout his long practice. He was concerned with the idea of the screen as a medium and mediator long before a generation of artists were ‘native' to the smartphone screens he depicted here. The impressive gambit of Boshier's understanding and commitment to this subject, and the impact that his voice brings, was the grounds for this exhibition.

Preceding this exhibition by a week was a momentary re-staging at Night Gallery of Derek Boshier‘s Journey/Israel, a project originally exhibited eighteen years ago at the Miskan Le Ormanut Museum of Art in Ein Harod, Israel. The installation (click here for images), consisting primarily of many small paintings, each just a little larger than iPhone-size, purveyed a journey jumping from one freeze frame to the next-requiring its audience to pay close attention to each changing detail with one slow step after another along its walls. The result was like a sort of language; as if stepping through waves of music in slow motion, led intently by the hand. Hanging nearby this central Journey was a single larger (and more recent) painting, flattening across a wall in bright and simple graphics. It described floating books and a laptop computer which sail across outer space, framed inconsistently with computer glitches.

In Cogwheels Carved in Wood, a group exhibition curated by L.A.-based curator and critic Jonathan Griffin, we find a handful of similar paintings hung centrally that serve as primary points of contact to be returned to within the show. Again a border appears in these paintings, but this time built more purposefully in a thick black line, occasionally also running down the centre as if the composition is not just framed but in fact screened though a high-rise window. Within these frames (or screens) you found foreshortened and disembodied hands clustering to snap photos of yellow camels in front of Egyptian pyramids, or floating disjointed in space clutching evermore onto these smartphone screens.

Although seemingly banal, these paintings casually divulge motifs handled by Boshier throughout his long practice. (For example, pyramids and similar shapes appear repeatedly in his drawings.) And indeed as the press release states (click here), Boshier was concerned with the idea of the screen (whether postcard, television, or newspaper) as a medium and mediator long before a generation of artists were ‘native’ to the smartphone screens he depicted here. The impressive gambit of Boshier’s understanding and commitment to this subject, and the impact that his voice brings with this, was the grounds for this exhibition. Orbiting from Boshier’s works were five younger artists who all also deal with the mediating screen as more subject than obvious medium. Significantly, there was hardly a screen in sight.

As in other Boshier images, hands cut from their bodies appear again, although now in photographic form (and assumed to belong to the artist). In a large, monochromatic pair of paintings by Lucie Stahl - potentially also drawing a link with Boshier’s repeated use of grey as a kind of ‘base’ colour - a collage of magazine images curves against a cylindrical form held up for review. Although long since removed from its surface, the scanner bed remains the unavoidable screen through which we now see. Like a more concrete version of photos taken late-night with a webcam, Stahl’s clay-crusted hands crumble in their pose as if petrified in their waiting (for what though?). Considered in the broader context of Stahl’s other scanner bed work (with sticky, sickly combinations of washed out colour, gloss, and foodstuffs) these works are more fossil than gloriously, toxically alien. But here it works. Her other images would’ve perhaps contrasted too strongly; would’ve too obviously been making a point for the ‘younger artist’, brashly overriding subtleties of form and texture embedded in these images.

Hovering above these two large rectangles are another two large frames, which themselves are multiplied at different intervals above head-height but well below the ceiling. These are pairs of glass trays by Sean Kennedy, the contents of which are laid out carefully to closely mirror one another. Apparently copied-pasted from one onto another, one can’t help but wonder how and why any of these objects found their way to this surface. Which was the first and which the copy? Which way is up? Laid out neatly, waiting, they give the impression of an abandoned middle-school DIY science experiment (to occur only safely on the other side of the glass). Hanging from above, these works demand a twisted neck to see, which can never quite last longer than 30 seconds. This physical frustration comes closest to the ‘flatness’ we most often diagnose of the screen; the lack of attention where precariously balanced objects could slip off from the clean glassy surface.

A similar thing occurs with Oliver Payne‘s mirrors, printed with the now defunct and jarringly abstracted control panels from ‘80s arcade games. These panels at once frustrate their original function and command their directions afresh. Symbols begin to mimic their immediate environment; one print resembles a glossy car hood or the metallic muscles of an iron man when placed alongside the rippling muscles of one of Gina Beavers‘ meaty torso paintings; another begins to look like a pair of startled eyes when accompanied by a hallucinogenic painting by Jamian Juliano-Villani that features eyeballs popping forward. And so there are many oddly grounded connections to be made across these works, each informed closely by the realities of networked media and screen-based consumption.

What is most refreshing is that this show does not simply proffer back to us the boredom in what is by this point an endlessly repeated rhetoric as to the flatness of our screens. Rather, it makes a fresh argument for everything that might be excavated within this ostensible flatness, feeling out their points of texture and pulling us right in so we might consider how we really do, might, and should inhabit these spaces, even if only for a half minute.

Readers interested in the London life of Barrie Bates (pre-Billy Apple) at the Royal College of Art (http://www.frieze.com/issue/article/brand-new/) will remember ...

Readers interested in the London life of Barrie Bates (pre-Billy Apple) at the Royal College of Art (http://www.frieze.com/issue/article/brand-new/) will remember Boshier as one of Bates' 'pop' colleagues. The newly arrived Bates met him through Robert Ellis, and the two became flatmates. Christina Barton's 'The Expatriates' (Adam, 2005) publication is particularly informative on this period. 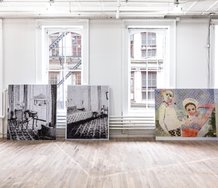 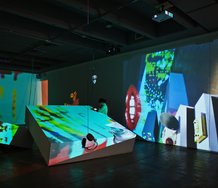 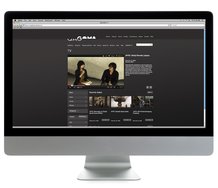 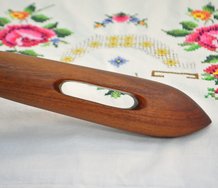