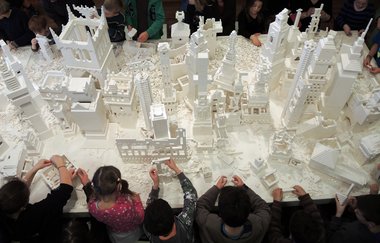 Yet if the idea of public engagement and community well-being in the making of a work of art is assumed to be good (and it is reasonable to believe it is) - as New York art historian Claire Bishop has recently highlighted about relational aesthetics - what type of relationships are being produced (by such works) and for whom and why? (Is ‘feel-good' a virtuous enough outcome for the arts to achieve?)

Opening six weeks after the announcement of the finalists in this year’s Walters Prize, Olafur Eliasson‘s The Cubic Structural Evolution Project at the Dunedin Art Gallery felt like a significant moment in the country’s art history. One in which the relationship between the gallery space, the artist and the public may have changed forever.

The publicity statements for both the Walters Prize 2014 and The Cubic Structural Evolution shared much in common. Eliasson’s installation of a large table overflowing with white Lego blocks was described in the Dunedin Art Gallery’s Log as ‘an environment of participation… [calling] on gallery visitors to actively produce this exhibition.’ The media release for the Walters Prize finalists could also have been describing Eliasson’s ever-evolving Lego-land: The work of the selected artists revealed a ‘commitment to modes of presentation that… shift attention away from objects to processes and situations.’

Both statements intentionally raised questions about the activities that take place in a public gallery space - the quality of the experience, the kind of experience, and its agenda. So it was also no surprise that The Listener commentary from Sally Blundell for 3 July on the Walters Prize ran with the headline; ‘Gallery, What Gallery?‘ Blundell essentially outlined the shared agendas of Eliasson’s installation and the ambitions of the Walters Prize finalists, suggesting that something about the art gallery as an institutionalized public space and site for contemplation and inquiry, is in a state of evolution.

The Cubic Structural Evolution Project has toured to the Dunedin Public Art Gallery courtesy of the Queensland Art Gallery (it is also coming to Auckland) and it represents one further step in which the relational art of Eliasson - his installations and arts project - continue to extend their global reach. Working from New York in the mid-1990s, and developing partnerships and association with architects and engineers, Eliasson’s art has progressed beyond the space of the gallery in large-scale public artworks, providing impressive outcomes for institutions concerned with audience development. His work is as much architecture as it is sculpture and/or participatory events. For example, a major undertaking like The Weather Project installation at the Tate Modern in 2003, in which images of visitors were reflected back at themselves, silhouetted against shifting orange light, attracted two million visitors.

It is the kind of track record that any publicly funded gallery would be foolish to ignore. In its spirited intention to engage the widest possible audience in a community-centred activity, The Cubic Structural Evolution Project invited the public to add to, alter, disassemble and rebuild whatever configuration of Lego monolith or object they desired within a designated gallery space. Described in the gallery’s programme as an opportunity for the public to be ‘the artist… [and] one part of many parts that make a whole’ it championed the notion that art has a social agenda, fostering community well-being through such an activity.

In doing so, it outwardly belongs to a familiar history of 20th century avant-garde practice - Fluxus or seventies performance art. The Cubic Structural Evolution Project comes with an excellent and respected pedigree. Certainly, in the bustle of activity it generated in the gallery (in contrast to the stillness and relative calm of the surrounding gallery spaces) it seemed provocative and exciting - How often does such busyness or collaborative transformation of an art work ever take place in what is traditionally a contemplative space? By the very nature of its intentions, The Cubic Structural Evolution Project brings together many familiar notion about contemporary arts practice as challenging; a subversion of traditional perceptions about arts practice, a stretching of audience expectations of how a gallery operates and important questions about what it represents.

Yet if the idea of public engagement and community well-being in the making of a work of art is assumed to be good (and it is reasonable to believe it is) - as New York art historian Claire Bishop has recently highlighted about relational aesthetics - what type of relationships are being produced (by such works) and for whom and why? (Is ‘feel-good’ a virtuous enough outcome for the arts to achieve?)

It is also questionable how challenging or open-ended, on any level, the making of the artwork in The Cubic Structural Evolution Project was. Eliasson’s has essentially prescribed its success by using only white Lego blocks to construct an art work also conceived on the uniformity of a shared geometric form. Risk is implied, but it never really contests the outcome. (In fairness to Eliasson, the most successful participatory/community public arts projects tend to be well-prescribed by the artist).

And what about its ability to generate new audiences? The Cubic Structural Evolution Project appears to have attracted significant visitor numbers. On the three occasions I visited (during the school holidays) there were between sixty to eighty visitors participating each time. Yet, nothing suggested that the remaining exhibition spaces were on anyone’s radar. The group exhibition Wild Life curated by Aaron Kreisler and featuring works from the gallery’s collection was sited adjacent to Eliasson’s installation and was consistently empty of visitors. This does not dismiss the long-term potential for new audiences, (a good first-experience, can encourage further curiosity), but it does imply that for the vast majority attending -they were there for the Lego.

Although Eliasson’s project may be centred upon disrupting expectations of the relationships between the gallery space and its audiences, it may be just a little too comfortable for its own good. In contrast, while the artists and their work selected for the Walters Prize are similarly engaged with a rethink of the relationship between their practice, the gallery and their audience, they also appear to demonstrate a greater degree of provocation. The demands placed on audiences by Luke Willis Thompson’s inthisholeontheislandwhereiam (visitors invited to taxi ride to an unspecified residential destination for an unknown purpose), or Kalisolaite ‘Uhila, Mo’ui tukuhausia, (living homeless in downtown Auckland for three months and encountering the police, media, local workers and residents), ask far more unsettling and uncomfortable questions. These are confrontational projects that assert the autonomy of the artist’s right to act upon, rather than simply alongside and in agreement with their audience.

Rather than point to contrary or conflicting perspectives held by differing communities and cultures, arguing for an acknowledgment and accommodation of such, The Cubic Structural Evolution Project sat within the security of its well-conceived comfort zone. In doing so, it highlighted issues around the reasons for galleries’ existence, aspects increasing in urgency as they take on more relational projects and become sites where communities socialise and engage (at numerous and varied levels) with (and within) works of art.