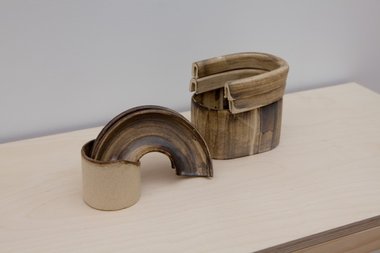 In their simultaneous striking positioning within the minimalist space and their earthy qualities, Winstone's ceramics bring to mind the organic aspects of Korean and Japanese earthenware and also the chromatic and structural simplicity of Danish ceramics, perhaps inspiration from her artist's residencies in Korea and Denmark. In experimenting with volume, form and the spatial relations that these qualities can invoke, Winstone's collection is powerfully evocative in its prompting of the corporeal response.

Form and functionality are explored in Lauren Winstone‘s exhibition Pieces currently showing at Two Rooms. Displayed on minimalist wooden tables in the intimate upper level space of the gallery, Winstone’s ceramics explore the blurred boundaries between functionality and the aesthetic, the domestic and the decorative.

Winstone’s ceramics are conceptual workings of how shape, volume, tone and texture can be altered and manipulated beyond the ordinary and the traditional. In each ceramic object she takes the pot and its connotations of domesticity as a physical and methodological starting point from which her conceptual re-workings can begin. The notion of the pot being a functional vessel is complicated through a multitude of nuanced ways: in Holding Holes it seems that part of the inner of the pot has been sliced away and placed on its side within the vessel’s interior, its curvilinear form arching up and out of the space. In another piece, a thin section of stoneware is delicately spiralling out from the interior of the pot, creating a fluid coiling line that leads our eyes simultaneously inside and outside the interior of the vessel.

The viewer is prompted to engage conceptually and physically with these subtly conceptual objects. The hand-made and organic quality of ceramic objects usually provokes a tactile response from the user or viewer (in that we can imagine the maker sculpting the forms out of wet clay with their hands) and Winstone transforms this natural response into a corporeal experience. The placement of semicircle arches within the cylindrical form of the pot invites us to pick them up and explore how they can be placed differently within the same space to produce a different spatial interaction. Our eyes travel around the undulating lines of the forms and our bodies are prompted to do likewise; peering over the objects to gain a better understanding of how the different components of the ceramic object have been put together and interlocked into their working relationship. In two of the Holding Holes objects we can see a narrow gap running along the middle of the semicircle outline, permanently suspending the two sides of the ceramic piece in an almost-touching-but-not-quite tension and anticipation. In another piece, two semi circles stand next to each other: almost touching but not quite, almost free-standing yet inexplicably bound to each other within this ambiguous spatial arena.

Such re-workings challenge the functionality of a traditional domestic object: in overlapping and slicing segments off the forms, Winstone has transformed what should be a concrete receptacle into a transformative and malleable abstraction of competing volumes and geometrics. The historical alignment of ceramics with domesticity and comforting functionality is thus exploited and played with by Winstone to showcase the ways in which traditional perceptions of the medium can be questioned and pushed beyond parameters of expectation.

Winstone‘s exploration with tone and texture further broadens the sensory parameters of the ceramic object. Aquamarine blue intermingles with an earthy brown and gold, tan colours shift seamlessly into shades of darker oak and tone is thus rendered organic and flexible in its status of flux. These variations also create interesting plays with texture. The gradations of the brown tones create the impression of a grainy tactility that offsets the wood of the table on which the objects are placed, prompting both a questioning of our haptic expectations of the stoneware and inspiring an intuitive desire to touch the objects in front of us. The striking white walls and soft lighting of the gallery space provide an intimate and pensive environment within which to appreciate these textural and tonal nuances. I do feel that some further editing of the exhibition would have enabled these qualities to have been appreciated to an even greater extent: on some tables there were four ceramic objects placed quite closely together, undermining the full impact of spatial and textural reflection that was prompted.

In their simultaneous striking positioning within the minimalist space and their earthy qualities, Winstone’s ceramics bring to mind the organic aspects of Korean and Japanese earthenware and also the chromatic and structural simplicity of Danish ceramics, perhaps inspiration from her artist’s residencies in Korea and Denmark. In experimenting with volume, form and the spatial relations that these qualities can invoke, Winstone’s collection is powerfully evocative in its prompting of the corporeal response. Her works demonstrate how the art object can be at once conceptually stimulating and perceptually comforting in subtly combining various formal elements to both challenge and please the receptive eye.