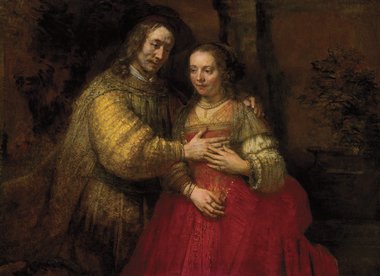 A ‘Rembrandt' painting immediately prompts a sound of recognition that signals, “ah, so it's a Rembrandt”. But the painting is so termed because it has been painted by Rembrandt. This subtle change of outlook transforms the viewing process from being one that is a blanket acceptance of artist/artwork into one that allows for each visual element of the painting to be appreciated for its microcosmic and macrocosmic effects, and the personal experimentation and ingenuity that has directed this.

A year ago I fell in love with the works of Rembrandt. Up until that point I hadn’t understood the fuss about the canonical artist and the genius associated with his distinctive treatment of light and shade and employment of gestural brushwork. For the Pre-Rembrandt-Me, his works were too earthy in tone, too indistinct from other seventeenth century artists, too focussed on people of a remote past with whom I had little in common.

Then one day it suddenly clicked. In preparation for an essay discussing Rembrandt’s manipulation of textiles to create tangible depth and realism, I decided to zoom-in on the groom’s glittering sleeve in The Jewish Bride. The mélange of broad strokes and short flicks of interspersed impasto and lightly applied yellow and white paint revealed itself to me in its full aesthetic glory. The fact that someone had painted this with intricate detail and intensive foresight of potential aesthetic effects was almost overwhelmingly incomprehensible. This realisation in turn prompted a revised, personal appraisal of his works. Whereas before I had seen simply an earthy background or the sleeve of a coat, I saw deft manipulation of paint texture and tone, producing oscillating passages of light, shade, colour and contour.

In discussing an artist and their creative products (especially when the artist in question is almost mythical in their worldwide reputation), it is all too easy to disassociate the creation from the creator. The artist instead becomes an abstract, impersonalised ‘brand’ or ‘stamp’ denoting, rather than connoting, the artworks on display. This fails to do justice to not only the personal hand of the artist, but also to the perceptive capacities of the viewer’s eye. A ‘Rembrandt’ painting immediately prompts a sound of recognition that signals, “ah, so it’s a Rembrandt”. But the painting is so termed because it has been painted by Rembrandt (or by a member of his studio under his guidance or design). This subtle change of outlook transforms the viewing process from being one that is a blanket acceptance of artist/artwork into one that allows for each visual element of the painting to be appreciated for its microcosmic and macrocosmic effects, and the personal experimentation and ingenuity that has directed this. This outlook is of course complicated in this exhibition. In an exhibition of reproductions, how can the individual hand of the artist be celebrated in the way I was just espousing?

Yet such a narrow interpretation fails to consider overarching effects. In addition to the unceasing passion of my lecturer, it was in fact technology that prompted and fuelled this personal ‘Rembrandt Conversion’. The ability to navigate into the inner depths of a painting through incremental ‘zooming in’ clicks on Google Images prompted a revelation that completely altered my viewing approach. The Rembrandt Remastered exhibition at the New Zealand Academy of Fine Arts is similarly demonstrative of the ways in which technology can aid and expand art appreciation and reception.

I entered the exhibition with some trepidation. I wasn’t about to see original paintings, but rather digitally remastered copies of the original paintings. What if the individual brushworks were imperceptible? Would the richness of the tones be lost? Would the experience seem artificial? Would I be disappointed due to my exceedingly high expectations?

Such fears were unfounded. Simply entering into a room full of Rembrandt paintings (reproductions or otherwise) is a privileged experience. The politics of international galleries, insurance policies, and private ownership render this experience nigh-to-impossible. Visitors to this exhibition will see life-size reproductions of works such as Christ in the Storm on the Lake of Galilee (1633) and Portrait of a Married Couple (1633), which have been lost to the public eye since their theft from the Isabella Stewart Gardner Museum in 1990. Furthermore, paintings from galleries such as the Met, the Rijksmuseum and the Staatsgalerie in Stuttgart are shown in the same gallery space, crossing geographical borders and overcoming logistical limitations. The Night Watch (1642) is almost directly opposite The Anatomy Lesson of Dr Tulp (1632), enabling viewers to forge links between painterly technique, composition, and patronage context, thus enriching viewer understanding and appreciation of the artist’s development within his personal biography and social context.

Similarly, the fact that the works were reproductions did not hinder my aesthetic appreciation, but rather amplified my responses to the nuanced variations of brushwork and tone. I was expecting a reproduced, glossy flatness, as per the postulations of Walter Benjamin that authenticity and technology are mutually exclusive. The opposite was the case. Because of my expectations I scrupulously, almost forensically, analysed the visual qualities of each print, looking for telltale signs of reproduction: blurred passages, an unrealistic ‘photographic quality’, a sense of detachment inherent in the images. Instead what I experienced was a heightened awareness of the sheer variety in Rembrandt’s painting technique. In The Apostle Paul in Prison (1627) I could clearly see the rough passages of grey, white and yellow pigment comprising Paul’s beard, its tangible texture emphasised through the scratching of individual hairs into the thick paint with either a nail or the end of a fine paint brush. The mound of straw to the left of the picture plane was enlivened as my eye followed each gestural yellow line curving upwards from the base of the work.

Such intensive viewing revealed new personal favourites. I hadn’t seen The Standard Bearer (1636) before coming to this exhibition and if I’d happened to glimpse it on a Google Images search I might have missed it. The subject matter in itself is nothing extraordinary - a man in ¾ pose turning towards the viewer with his arm akimbo, a swathe of fabric wrapped around his left arm. Yet seeing this work in a life-size format was a transformative experience. My eye traversed over the rough, dryer application of white, grey and brown paint sculpting the drapery in the background and moved over the looser, thicker yellow and white paint constituting the sheen of his satin coat. These lyrical curvilinear lines create a dazzling optical illusion of light and texture, and move the eye rhythmically and playfully down the sleeve to the gilt of his sword.

The Standard Bearer is merely one stunning exemplar of Rembrandt’s works of tonal and textural vitality and challenges anyone who thinks that the words ‘stale’ and ‘boring’ are synonymous with his artistic oeuvre. In his essay “Rembrandt’s Secret”, Jean Genet (1948) made the claim that Rembrandt’s tactile paint application equates to abstraction. Benjamin Binstock extrapolates upon this by arguing that Rembrandt’s paint application produces not only painterly ‘sculptures’, but also evidences an exploration into how surface and volume can be optically suggested when seen from a distance (see the article, “Rembrandt’s Paint”, 1999). Rembrandt Remastered enables these qualities to be appreciated by the masses. The perfectly reproduced congealed patches and impasto clumps of yellow, blue and orange paint in the foreground tapestry of The Syndics of the Clothmaker’s Guild (1662) are not only an exercise in illusionism (that is twofold: Rembrandt’s illusionistic painting of texture, and the exhibition’s illusionistic employment of photographic reproduction) but also support Ernst van de Wetering’s (member of the Rembrandt Research Project and driving force for this exhibition) statement in the instructive videos that Rembrandt’s painting are indeed “about painting”.

In this exhibition there is only half a metre or so distance between the viewer and Rembrandt’s masterpieces. We can kneel in front of certain passages and engage in a far closer viewing process than we would if we were in, say, the tourist-cluttered spaces of the Rijksmuseum. I sat for about fifteen minutes in front of my favourite section of The Night Watch: the fine blue and yellow brushstrokes constituting the cuff and staff of the lieutenant Willem van Ruytenburch. I gazed, unimpeded, upon the individual flecks of yellow paint against the fur trimming of his sleeve, marvelling at the utterly convincing three-dimensionality. For the first time, The Night Watch came alive for me. I was then able to envisage it within its original context, imagining its awe-inspiring effect on the seventeenth century Amsterdam viewers. I was transported into a completely different viewing experience. Ironic, then, that that the technology of our period provides us with a ticket by which we can more credibly experience Baxandall’s ‘period eye’.

The positives of Rembrandt Remastered far outweigh its minor setbacks. The white walls at times provided a far too stark background for the unframed reproductions, reducing the sense of revelatory intimacy that should have been felt in works such as Young Girl Leaning on a Stone Windowsill (1645). Similarly, at times the spotlighting was too harsh, negating the textural variety in the darker passages in works like The Nightwatch. These are, however, incremental details that do not detract from the quality of the whole.

Rembrandt Remastered is precisely what the title suggests. Rembrandt has indeed been remastered, in a reproduced format that prompts a heightened awareness and gaze from both his most avid followers and those whose curiosity might spark a conversion.

Here is somebody preparing an exhibition of Impressionist replicas for November. Is this worthy of serious investigation? Have a look ...

Here is somebody preparing an exhibition of Impressionist replicas for November.
Is this worthy of serious investigation?
Have a look at his argument... https://www.pledgeme.co.nz/projects/4605-replicating-genius-impressionist-exhibition-of-1874 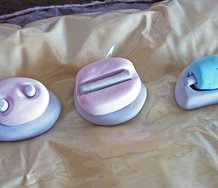