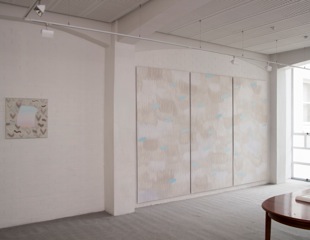 The paintings seem to simultaneously to advance and recede, dissolve and appear, creating an interplay of contemplative restfulness and ephemeral vitality within the intimate interior of the gallery space. Their beauty is derived from the simplicity in which formal elements of the canvas are explored and utilised to create evocative variations of tone, texture, and a floating space both within the permeable parameters of the canvas and the gallery itself.

The playful, the decorative, and the restful converge in Amber Wilson’s paintings at the Anna Miles gallery. Painted in delicate strokes of pastel hues, the works infuse the intimate gallery space with a soothing and meditative atmosphere that enables the viewer’s eye to contemplatively explore the textures and tonal variations in the various canvases.

Inspired by the optical effects of collage, Wilson’s paintings evidence an interest in how textural interaction can take place within the sphere of the canvas. In the six smaller square canvases, an abstract shape seems to have been superimposed onto the middle of the canvas, its parameters defined not by hard lines but rather by the differential way in which tone and paint application have been treated in comparison with the background. Short gestural strokes of light blue, coral and grey constitute the geometric shape in the centre of Furnishing Music, providing a locus of textural and tonal variation against a background of softly curving faded brown lines that seem to simultaneously advance and recede in the sphere of our perception.

Bells in the Schist seems to create an optical inverse of this: short, loosely applied strokes of grey, lemon and blue create a varied background upon which is superimposed a smooth abstract shape that seems to float above the painterly surface, its tonal transitioning between light blue and coral seeming to be both dependent and independent of the rest of the activity on the canvas. This stark layering effect serves to emphasise the flat quality of the canvas, prompting us to gain a greater appreciation of how this space has been utilised to produce certain optical effects on the eye. The works in which the collage effect is more overtly explored (in which a ‘flat’ and smooth abstract shape is superimposed onto a gestural background) suggest an ‘other worldly’ quality in their mysticism and beauty and are perhaps more visually evocative than other works such as Drift Studies, in which dabs of different coloured paint are scattered over the canvas.

The delicate colour palette utilised by Wilson in this show creates a meditative and restful ambience that allows for the viewer’s eye and mind to contemplatively absorb the formal qualities within the canvas. These works are a slight departure from Wilson’s 2013 and 2011 paintings, in which strikingly rich patterns and tones are placed next to each other, more explicitly demonstrating Wilson’s interest in fabric design and almost quoting Rousseau in their vibrancy and stark two dimensionality (and also on a personal level for me, the illustrations from Eric Carle’s “The Very Hungry Caterpillar”).

Whereas the collage effect of these earlier works create an aesthetic presence that asserts itself onto the canvas, the paintings in the current exhibition seem to float within the gallery space, their muted tones blending into the gallery walls on which they are displayed. This can particularly be seen in the stunning triptych What were the skies like when you were young? that dominates the far wall closest to the window of the gallery. Varying tones of grey, soft pinks and soft browns intermingle, painted in smooth coiling lines that gently lead the eye around the expanse of the three boards. On top of these are placed gestural strokes of blue paint that are dotted around on top of this muted background, seemingly floating within the gallery space and directing our eyes in a gentle upwards movement across the triptych. The thickness of the paint with which these strokes are rendered produces rich textual variation, underscoring the smooth application of the pink, grey and brown paint. Texture and tone enrich the qualities of each other, creating a painting of restful balance and contemplative harmony.

Wilson’s paintings are refreshingly uncomplicated and beautiful to look at. Their beauty is derived from the simplicity in which formal elements of the canvas are explored and utilised to create evocative variations of tone, texture, and a floating space both within the permeable parameters of the canvas and the gallery itself. The paintings seem to simultaneously to advance and recede, dissolve and appear, creating an interplay of contemplative restfulness and ephemeral vitality within the intimate interior of the gallery space.