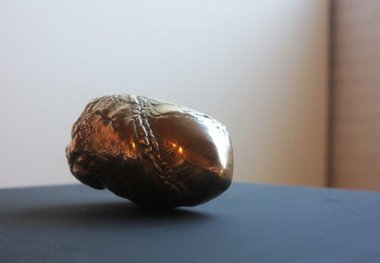 The tubular in and out-flows (such as the superior and inferior vena cava veins, and pulmonary arteries) have been trimmed off so that the muscular organ looks more like the inverted, pear-shaped romantic love motif, but obviously a whole lot fleshier and bulbous.

This unusual exhibition by Melissa Coote presents a selection of cast bronze mammal hearts, a suite of five framed photogravures of them, and two ‘paintings’ (actually dense drawings on stretched canvas) based on a couple of the photogravures.

The bronze hearts consist of three weighty organs from bulls and a much smaller, more intricate one from a ewe. The tubular in and out-flows (such as the superior and inferior vena cava veins, and pulmonary arteries) have been trimmed off so that the muscular organ looks more like the inverted, pear-shaped romantic love motif, but obviously a whole lot fleshier and bulbous.

Two of the bulls’ hearts look golden and burnished through the way they are lined up on a long plinth - in contrast to the third one at the end. This is covered with a matte black patina so it looks almost like wax. As lumpy solid masses these cast ‘pumps’ fascinate because their surface qualities dominate over the sinuous properties of their turniplike shape. The eye skitters over the fine muscular creases, folds and intermittent striations that become a type of aerial landscape.

This detailed intricacy is flattened out a little in the photogravure images, and a lot in the two larger coarser hessian canvases with graphite and metallic pigment mixed with gum Arabic (as a semi-carved relief) and where drips run along the bottom edge of the stretcher. The latter (especially in the foreshortened image) look strangely like blotchy maps: a rough cartography of a cabbage-shaped island on a black sea - with gnarly hills, shallow valleys and indented bays.

Coote’s photogravures, with their velvety blacks, few greys, and intermittent highlights, along with their odd spatial contrast (where the edge of the ‘meaty’ three dimensional cast meets the receding sooty background), fascinate through their wilful repudiation of modern technology. The soft photogravure ‘look’ - with its subtly muted detail and restricted tonal range - belongs to an era long past, as do the glowing, highly reflective bronzes on the other side of the room. Yellow light and carbon black, shrewdly synchronised and balanced together.

Bulls’ hearts have connotations of courage and focussed determination, yet morphologically they have an anatomic lumpiness that suggests a formlessness far removed from any palpable links to symbolism. Were they in ‘realistic’ colours this notion would be obviously ridiculous because the overtly symbolic correlation would overwhelm any horizontal ‘slipping’ of form and subsequent loss of interpretable meaning. However without that colour the fluid materiality and chroma of bronze seems to heighten its properties as a substance, undermining (on the viewer’s part) any interpretative thought clinging to representation. There is a heightened ambiguity, a vacillation that inflects one’s approach to the perception, spatial analysis and detection of tropes within these sculptures.