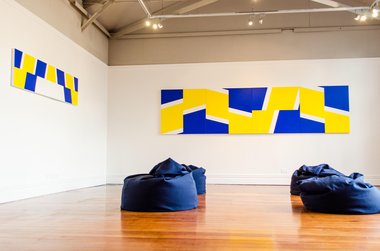 McAvoy utilises an artistic style associated with a fascist ideology order to critique the institutions that he sees as diminishing our rights to privacy and freedom of thought in New Zealand. Style in itself, then, becomes a political carrier of meaning, investing the blue and yellow pattern on the canvas with a multi-layered meaning. What is conventional is problematized, simultaneously referencing and resisting control through symbolic meaning.

There was of course no way of knowing whether you were being watched at any given moment. How often, or on what system, the Thought Police plugged in on any individual wire was guesswork. It was even conceivable that they watched everybody all the time. But at any rate they could plug in your wire whenever they wanted to. You had to live - did live, from habit that became instinct - in the assumption that every sound you made was overheard, and, except in darkness, every movement scrutinised. - George Orwell, 1984.

The encroaching presence of state surveillance is the subject of social aesthetic critique in Emil McAvoy’s exhibition PRISMISM at Wellington’s Enjoy Public Art Gallery. McAvoy employs a fragmented abstract style to launch an attack on the infiltration of government and police surveillance within the fabric of everyday life for New Zealanders. This critique is made explicit through the titles of the works, which reference international and local modes of surveillance such as Government Communications Security Bureau Bill (Futurist Painting for GCSB Boardroom) and the CIA (Study for Donation to CIA Intelligence Art Collection).

The bold yellow and blue colours that are emblematic of the New Zealand police patrol are assembled into a striking abstract pattern across the four canvases that line the back wall of the gallery space in Futurist Painting for GCSB Boardroom. These colours are fragmented into geometric shapes that are juxtaposed against each other, creating a criss-crossing pattern of diagonals that lead our eyes across the canvases.

Such fragmentation of the picture plane is, as stated in the catalogue notes, demonstrative of McAvoy’s inspiration from the slightly controversial mandates stated in Marinetti’s Futurist Manifesto, which proclaimed the Italian Futurists’ worship of machines, cars, war, violence, aggression and speed, all at the expense of the individual. As such, McAvoy utilises an artistic style associated with a fascist ideology order to critique the institutions that he sees as diminishing our rights to privacy and freedom of thought in New Zealand. Style in itself, then, becomes a political carrier of meaning, investing the blue and yellow pattern on the canvas with a multi-layered meaning. What is conventional is problematized, simultaneously referencing and resisting control through symbolic meaning.

This play on the readability of visual features can similarly be seen in Maquette for Sculpture Proposal (National Party Headquarters, Wellington). As stated in the catalogue notes, McAvoy was influenced by Sang Mun’s encrypted typeface ZXX, designed to evade the surveillance systems of the NSA’s Prism program, which was secretly monitoring the communications worldwide communications. Similarly, these sculptural objects seem to elude a concrete reading within their photographic frame. Leaning against a wall and placed on the floor of the gallery space, the photograph seems to simultaneously be a realistic and artificial projection of the wooden floors and the gallery environment: the white background of the photograph blends in with the walls of the gallery, and the photographed wood panels blend in with the floors, yet both detract from the realism of the other. It is neither floor nor wall, knowable or unknowable in its spatial relation to reality.

Similarly, the photographed sculptures inhabit a space that is difficult to cognitively read and code. They tilt upwards from the floor on which they are placed yet the angle with which the photograph has been taken means that this tilting is not towards us, but rather an abstract space that we cannot relate to. As such, the sculptures seem to hover above both the floor on which they are placed, and also within the photographic frame, rendering both our subjective positioning and the objective status of the object frustratingly uncertain and malleable.

It is refreshing to see artists engaging with current issues politically and aesthetically and using local symbols to critique the very institutions that they embody. The exhibition catalogue includes an interesting selection of essays that examine the impact of surveillance in our contemporary society in the aftermath of the GCSB. I particularly enjoyed Guy Cohn and Henri Carlos’s essay What do we think?, which entreats the reader to assume a more politically active role in society through quotations such as “Politics requires that people organise. This organisation can be reactionary and it can be confused… there are times when people will organise themselves in such a way that truth is revealed about the state of things” (1).

This essay almost seems to suggest the encroachment of a dystopian, Orwellian-esque world if institutional surveillance continues to breach the public/private divide: “in the policing of possibility we are regularly reminded of the horror of the ‘unthinkable’, the ‘unspeakable’, and the ‘unimaginable’… the fear of the unthinkable is in reality a fear of thought itself, and this-fear of thought-is what grounds the politics of surveillance [sic]” (2). McAvoy’s effectively simple The Unthinkable gives us a simple command: “THINK”. We are thus prompted to think about not only the meanings governing this exhibition, but also the social political events in contemporary society. Yet the command of the work in itself seems to allude to something more complex than merely directing a certain critical viewing of the exhibition, and perhaps could allude to the pressure to think a certain way and avoid what is ‘unthinkable’ in a society in which surveillance is paramount.

However I feel that McAvoy’s works could have made this criticism more overt and with greater impact through the exhibition of his works. Although the four blue beanbags placed on the floor in front of the canvases provided spatial and textural variety with their soft, rounded forms, they didn’t seem to be fully incorporated within the overall show and didn’t seem to invite the viewer to walk amongst them. Perhaps an inclusion of some yellow elements could have provided greater visual and spatial interest for the viewer in prompting a more dynamic relational interaction.

Likewise, I was left wanting to feel something more when viewing canvases like Futurist Painting for GCSB Boardroom. While the works are certainly striking in colour, their abstraction of the checkered NZ Police insignia seems minimal, to the point where it seems almost like a direct quotation (particularly in Study for Donation to CIA Intelligence Art Collection). The Futurist influence could have been explored with greater impact, with greater fragmentation of the picture plane through more incisions of diagonals so as to create the frantic, almost violent energy that you can sense when viewing works such as Russolo’s The Revolt. Futurist works tend to physically activate the viewer, prompting them to perceive and experience the constant flux of time and movement in the picture plane. McAvoy’s paintings, although visually striking, feel almost static; an effect aided by the presence of the bean bags. Although the blocks of colour are fragmented, they still manage to give an impression of visual unity and cohesion through their relatively large size on the canvas.

Yet perhaps this alludes to another meaning that could be underlying McAvoy’s exhibition.  The title Futurist Painting for GCSB Boardroom seems to point to another connotative space beyond the realm of the gallery: the boardroom in which government policies are made, a space that is removed and detached from the populace who will be affected by the decisions made.  Perhaps then, the static feeling is intentional, alluding to the false pretensions of democracy and goodwill that are used to conceal policies that are intrusive and restrictive. In this interpretation, the fragmentations within McAvoy’s works indicate the fracturing of this veneer and in turn, the increasing abstraction of concepts like public protection, democracy, and individual liberty.

(1) Guy Cohn and Henri Carlos What do we think? in Prismism exhibition cataglogue, page 15.