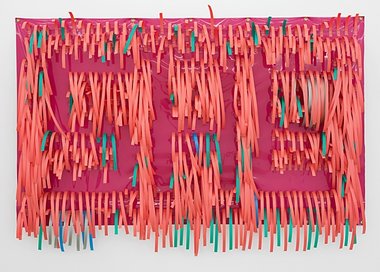 Looking at photographs of this exhibition doesn't come close to the experience of walking through the galleries and engaging with the sequencing of work, its spatial relationships, repetitions, and scale. This superbly organised show is about physicality and moving around and between the exhibits, comparing formal elements and linking up varieties of mainly rural subject matter. A treat to explore.

An exhibition that revels in playful conversation between wall and freestanding floor works, When I paint my masterpiece - a title from Bob Dylan - is less about exemplary solo brilliance and more about exchanges inside a vibrant group dynamic. Within the two Hopkinson Mossman gallery rooms, twenty works from five artists trade multiple cross connections through formal properties and allusive narrative meaning. Though the title refers to painting, the brushed on or sprayed surfaces of sculpture like that of Fiona Connor or Don Driver extend that focus.

The most conspicuous interactions between painting and freestanding sculpture are generated through the presence of David Keating’s Reverse Arcade (2012), its black steel frames mimicking the similar bars of Oliver Perkins’ also rectangular /skeletal Untitled (2014) on its left. While you are looking through it, its painted dangling blue rope also nods to - on the right - the sky of Andrew Barber’s large Study (Sunday 13.37), 2014. Other ‘chatty’ examples are the two Connor works from the Bedside, Mailbox series, the box shapes of these rural simulations on posts ‘bouncing off’ Driver’s chunky Cartridge (1981) and cross-sectioned Circle 6 (1990).

Connor’s letterboxes also connect with the painterliness of Keating’s other contribution, a small oily brusherly stretcher with a cutaway bottom edge, revealed as hollow and painted further inside - detectable if you stoop to get underneath and peer up. Another example of devised links is a mauve fluffy duster in Driver’s Cartridge that echoes the purples in a small painting behind it, Andrew Barber’s Study (Good Stick Lipstick), 2013.

The three Perkins works in the show, made with doubled stretchers and often very subtle stains of colour (a faint bluish bone or pinkish buff) use diagonal armatures to apply compositional horizontal pressure on the outer edges. Though paintings that can be connected to the British ‘doorway’ style of Robyn Denny, or the linearity of Patrick Caulfield or Michael Craig Martin, they also seem to allude to the sculpture of John Panting with their minimalist austerity.

Andrew Barber has more works than anybody else in this show, and surprisingly, very few landscapes. The best examples emphasise the objectness of painting, demonstrating an exact sense of impeccable scale. Study (Good Stick Lipstick), 2013, and Study (Good Stick No.1), 2013, feature delicately coloured curved lines, aligned in parallel, hanging from the upper borders as if a sagging awning. These small but exquisite works have a compelling intimacy even when viewed from the other side of the room. The brushwork is nuanced when examined close up but when seen from a distance the square form takes over, compressing and assertively declaring itself as intricate shape.

Barber also has several canvas patchwork paintings, including one particularly witty example that looks as if it is made with a splattered sliced up dropcloth. One of its squares presents elegant black lettering taken from the branding found on cans of Resene paint. In the small gallery is another Barber painting that is not so obviously self-reflexive. It is made with random marks from brush bristles that look like scattered blades of grass. On its left is a lush Barber landscape - painted from a real estate website Instagram. On its right is Circle 6, a Don Driver relief featuring a suspended hand scythe.

In the large room is another Driver - one of my all time favourites - Duraband 10 (1988), with four rows of curling pink nylon webbing tape stitched onto a large purple plastic sheet. Borrowed from the Chartwell Collection this bouncy springy composition emphasises Driver’s interest in the circular - a contrast with the straight lines found in the rest of this show, including the stratalike projections of his own Relief with Pleats (1969).

Looking at online photographs of this exhibition doesn’t come near the bodily encounter of walking through the galleries and engaging with the sequencing of work, its spatial relationships, repetitions, and scale. This superbly organised display is about physicality and moving around and between the exhibits, comparing formal elements and linking up varieties of mainly rural subject matter. A treat to experience and mentally explore.