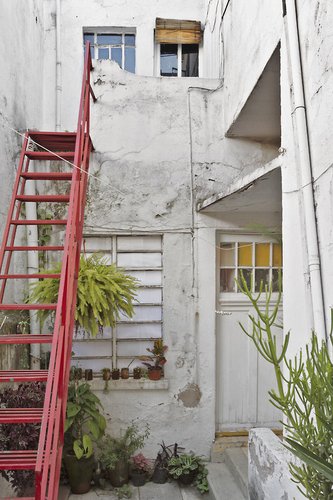 This sequence of works amounts to a composition of brief moments - poetic ones that carry the simplicity and charm of the Frank O'Hara lines Newby repeatedly borrows. She engineers a rhythm and route which have you inadvertently crouching down at a footpath, looking over to the neighbours' place, walking into some bells, becoming immersed in brilliant colour, following a string that disappears and reappears, and then staring up at the sky.

Kate Newby
I feel like a truck on a wet highway

If Kate Newby’s clandestine public works are intended to absorb and be absorbed by their environment, they couldn’t be better suited to a place other than Mexico City. Here surreptitious compositions, painted rocks, coloured footpaths and ad hoc fixtures make up the clutter of public and private spaces everywhere. For this solo exhibition, Newby takes viewers on a simple progression throughout and around the private residence and project space, Lulu, in Mexico City’s Roma Sur district.

The exhibition starts on the footpath where a red concrete mixture has been roughly poured next to a tree and embedded with stones, a small bit of silver, and prodded with a few divots. Keen observers may notice that its stones are in fact handmade, high-fired porcelain ceramics. It’s quite a funny precursor to the ridiculously huge cement cone she has set around a footpath tree at a recent exhibition at Arnolfini in Bristol.

Inside the property two works are tied together by a length of string that starts from the neighbour’s roof, comes down over a wall (mimicking the fall of other electric wires between the properties), passes through the house and into the gallery-proper where it disappears into the corner, re-emerging by the front door, its unused length balled up at the bottom of the door frame.

Eleven finger-tip-moulded silver bells hang off the string at the front landing, attached by iridescent red and pink threads. If you move them (or accidentally walk into them) they make a very delicate twinkle just audible under the mix of horns, bike-riding vendors, a trumpet player, planes and neighbouring gossip happening around the house. I think it could be Newby’s intention to draw you closer to the hum of the city rather than the sound of the bells.

In the gallery proper, a row of unique handmade chimes hang off a long string. It bows with their weight drawing an extended curve throughout the room, making a heavy, glassy clink. They are ordered in groups of colour and length and a subtle arch is created at the midpoint that equilibrates the string’s weighted bow.

The floor is painted a brilliant cerulean blue, “a blue you see all around this city” someone said. I wonder if this is a substitute for a body of water as her works often comprise a sea or lake or puddle (as in the Skip Stones works) and the coast is so notably distant from here. It is fitting that the exhibition is not far from the house and studio of iconic Mexican architect Luis Barragan whose use of light and colour have almost certainly influenced Newby in exhibitions such as Crawl Out Your Window (GAK, Bremen, 2010) or Thinking With Your Body (Gambia Castle, Auckland, 2008). Perhaps Barragan’s influence here is in the pool of blue light flooding this room.

Out the back five handmade porcelain ‘rocks’ - dark brown, black, yellow and blue - are placed on top of an outhouse. One is a porous, alien looking object. These sculptures feel oddly familiar in this city; I saw similar things in a garden on my way to the show. They are above head height and out of reach and seem to draw you skyward, transporting you out of the exhibition.

This sequence of works amounts to a composition of brief moments - poetic ones that carry the simplicity and charm of the Frank O’Hara lines Newby repeatedly borrows (the title of this show and its works referencing a line from his 1959 poem Naphtha). She engineers a rhythm and route which have you inadvertently crouching down at a footpath, looking over to the neighbours’ place, walking into some bells, becoming immersed in brilliant colour, following a string that disappears and reappears, and then staring up at the sky.

It is hard to locate Newby’s practice within a history of visual artists. Instead her work is best read in the context of the poets and architects she invokes. What is compelling about this practice is that it’s hard to tell just where the art starts and where it ends. You forget you are in an art viewing context and when you leave you notice weird objects all over the place, and wonder, are they Newby’s or the city’s? 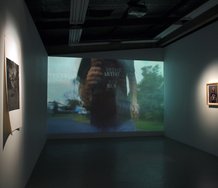