Holistic installation, or Painting with Sculpture? 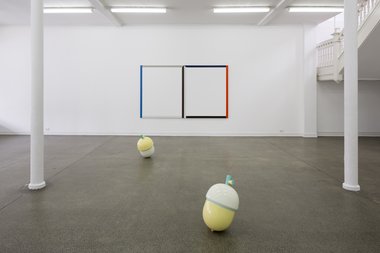 While the lolly coloured acorns, a symbol of latent interpretative potential, glow against Starkwhite's grey concrete floor, the more saturated coloured strips - edging around the white stretchers and alluding to 'restriction' - play with the identical whites of supporting and supported planes (wall or canvas). They help them merge or jump apart, while the single mitred diagonal in one of the four corners reacts against the butted corner bands that make up the rest.

In this holistic installation of Periphery paintings and Dottori sculpture, collectively mingled to create a total spatial memem experience, coloured ‘frames’ are juxtaposed with pastel hued, fibreglass acorns. Physical and ideational representations of paintings and oak seeds dominate the spacious downstairs gallery - five of each, though one painting is a double-stretcher. ‘Empty’ rightangled rectangles contrast with stubby, rotund sculptures that present the same five colours shuffled around. The painted borders though have a far wider, less tonally predictable colour range, and are less schematic.

While the lolly coloured acorns, a symbol of latent interpretative potential, glow against Starkwhite’s grey concrete floor, the more saturated coloured strips - alluding to ‘restriction’ - edging around the white stretchers, play with the identical whites of supporting and supported planes (wall or canvas). They help them merge or jump apart, while the single mitred diagonal in one of the four corners reacts against the butted corner bands that make up the rest.

In terms of stability it is interesting to compare the surety of gravity pressing the acorns to the floor, and the looser visual pinioning of the paintings on the wall, with the different chromatic and tonal weights around their edges, and the 45 degree slices through some corners. The paintings vaguely reference Imi Knoebel and early Frank Stella with their emphasis on ‘voided’ centre and outer edge.

Looking at the acorns, there is a sly intimate humour with their weighted nippled tips pushing into the polished cement, while with the paintings, it is about something else entirely - a form of logic using three pairs: one butted together to make a single bifurcated unit; another with the couple slightly separated; and one with nonmatching sizes at rightangles on a corner. That use of the rational extends to the properties of the vertical and horizontal bars: some full length, some truncated, others mitred.

It is also obvious that the ‘emptiness’ of the painting stretchers, accentuated by of course the ‘starkness’ of the wall, reflects the ‘emptiness’ of the floor with the five modestly sized acorns that are spread far apart. As the photographs here indicate, the relationship between floor sculpture and wall paintings functions in a way that makes some qualities mentally interchangeable. You can compare formal aspects of course, like round versus straight, soft versus hard, but you also wonder about if the colours could be swapped around, and if the spatial positionings between the two sorts of object are set. Is there a discreet structure in the spatial arrangements here that could be repeated if the show were taken to another venue?

Then there is the business of metaphor. Does the acorn stand for interpretation of the painting series, and the painting ‘frames’ for the generic ‘limits’ of the sculpture? The paintings with pale hues allow the wall and canvas plane to optically mingle along certain edges as if only three borders exist, as if one side has dissolved. The rectangle becomes a U, perhaps a pot that the acorn has fallen out of and rolled across the floor. A bizarre dreamlike narrative blending the two.