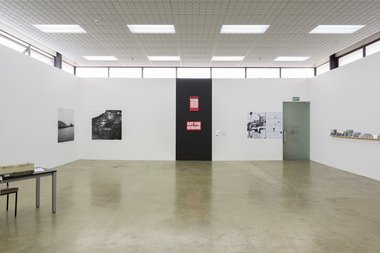 The title seems to refer to the change and imagination of both the director and his audience - the Auckland community of ‘experimental art' enthusiasts he addresses. It provides an opportunity for the local ‘clients' to talk with (and perhaps about) him: a starting off point for conversation and debate about his leadership, ideas and taste.

In this show, which is a sort of introduction to the personality and thought patterns of the brand new Artspace director, Turkish curator Misal Adnan Yildiz, we have a variety of works - video, performance, drawings, photography - that will be added to in late January (after the recess) by various visiting artists and a publication.

The title seems to refer to the change and imagination of both the director and his audience - the Auckland community of ‘experimental art’ enthusiasts he addresses. It provides an opportunity for the local ‘clients’ to talk with (and perhaps about) him: a starting off point for conversation and debate about his leadership, ideas and taste.

Although one might simply assume Yildiz wants to introduce to the regions (the so called global ‘provinces’ that are far removed from the ‘centres’) some pithy international issues from key cities in the Northern Hemisphere, judging from his posters seeking new writing, new proposals for shows, and new artists, Yildiz’s modus operandi is much much broader than that.

Of the eight artists so far, five have work in the big square Artspace gallery, and three are in the adjacent narrow rooms on the side. Each of the selected works has its own cluster of nuances, usually to do with deconstructing obvious binary opposites. The connotations of their images or activity are slippery and not self-evident or tightly bound to their origins or nationality.

Vangel Vlahos‘s Foreign archaeologists from a standing to bending position (2012) presents 53 cropped found photographs on a long shelf, sequenced in order of the scientists gradually hunching over and then in the middle un-doubling over, and slowly on the right, straightening up. A little like a Patrick Pound or Christian Marclay work in its organisational structure, it alludes to the politics of colonial historical research, and obviously is highly pertinent in terms of the current argument between Greece and England over the ownership of the Elgin Marbles - bending here signifying an act of subjugation or submission.

Related in its use of vertical versus horizontal is Nilbar Güres‘ Headstand (2014), a massive photograph that combines a yogic headstand with empathy for the tree life of a tropical rain forest. The inverted woman, documented with talismanic symbolic accessories planted in the ground on each side, has carefully chosen appropriate signifier-laden garments, with other symbolic colours, fabrics and objects painted on or wrapped around her feet and legs. Her head is pressed intimately against the planet, turning her into a living totem pole that is growing out of the earth, or perhaps a mystical Kabbalistic Tree of Life which is often talked about as inverted.

Also sympathetically tuning into a natural environs is Christodoulos Panayiotou‘s Armchair for Sarah Bernhardt (2009), a set of photographs showing a seat carved in the rocky outcrop of a windswept island once owned by the legendary actress Sarah Bernhardt off the coast of Brittany. The negative space becomes a symbol for her corporeal absence, the location a cipher for private versus public.

The performance organised by Toril Johannesson elaborated on the story of her father’s invention of a perspectival drawing system using graph paper that he developed before digital technology ascended, but which was eventually created and patented by a rival German company. The work involved passed on verbal accounts recorded via uncorrected typing, again accentuating the distinction between private and public, but looking at processes of technology and historical truth.

Palestinian comic artist Samir Harb‘s enlarged poster/panels from a forthcoming publication blend narrative account and theory, while alternating positions between official Israeli and Palestinian versions of the present conflict. It is deliberately unpredictable and non-doctrinaire, but attempting to attain an impartial form of historical accuracy.

Viron Erol Vert‘s intriguing video installation, A, Alif, Aleph (2014) made with Hermione Frank and Hanno Hinkelbein, seems to be a version of the Kabbalistic view of the alphabet, where letters have a significance beyond mere symbolism within written or spoken syntax, but actually play an active role in the material structure of the cosmos, being building blocks like parts of a divine jigsaw. With Vert though, there are inner and outer worlds, cosmic shells within cosmic shells, that seem related to the Jewish Sephirot.

With Fancy Violence’s Pyeta (Pieta) presentation, we see a video constructed by Brazilian painter Rodolpho Parigi that mixes together themes to do with colonialism, desire and transgender issues, occasionally featuring himself in drag. His videos (a form of karaoke cabaret) are filmed in gay nightclubs, and his methods and imagery have many similarities to those of Australian/Chilean painter Juan Davila who has used published photo sequences as well as canvases. However Parigi is without Davila’s use of appropriation, considerable verbal articulation, shock tactics and sarcasm, being more interested in science and anthropology than critiquing contemporary art internationalism.

The eighth artist Yildiz has involved in this show is Billy Apple who has contributed two canvases. These are part of an international auction initiated by Hito Steyerl and Anton Vidokle to raise funds to help the refugees in Kobane fleeing IS. Developments in bidding, and other works being offered, can be checked out via a tablet set into the Artspace wall.

Yildiz has organised a stimulating array of works in this exhibition, which as mentioned, continues to expand next January. He is clearly trying to generate more interaction with his audience and more intellectual participation. The publication will shed more light on this show as events and discussions unfold.