Thom and Barry at Te Uru 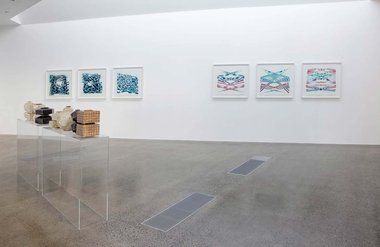 In Te Uru's pairing of these artists' works there is a certain amount of interactive wit, because Barry's highly tactile drawings have a lot of spatial depth and Thom likes to push the opposite, emphasising with striations the flat planar surfaces of her compact, blocklike sculpture.

Though Barry in her image construction often contrasts macrosystems with micro, this series is less split (though still intricate), presenting clusters of overlapping lethally tipped slivers. They rest on hand-drawn fields of ‘graph paper’ grids where angular positive and negative forms raucously jostle together. The acute-angled scalene triangles in this display are organised into different compositional approaches - correlating with red, blue, green and mixed palettes. There are four formats: piled up heaps of thin red horizontal ‘blades’; vertical and horizontal formations of fatter blue triangles in a spiralling empty square formation; green clusters of feathery spikes that look like flapping wings; and symmetrical (but complex) configurations (of different colours) stacked vertically to look vaguely like a series of overlapping, star-jumping figures.

The last variety of overlapping ‘converging ray’ composition I find especially interesting, with its shimmering checkerboard patterns and quivering piercing tips. The aggressive prickliness of the multi-directed points could empathetically make you itchy and uncomfortable, transmitting an infectious bodily irritability - yet the innovative detail within each flickering intricate spike encourages lingering; though perhaps wary of catching a rash. Barry’s use of harsh red likewise provides a strident assonance that rasps against the softer blue and green, accentuating an abrasive and frenetic restlessness.

Although in the exhibition’s promotional material, utopian themes are stated as important motivations behind this show, that is more obvious with Thom‘s work than with Barry’s where one might think there is a link with František Kupka, Orphism and light. In Barry‘s case, the work (as an excellent accompanying essay by Jan Bryant points out) indicates an interest in multiple causes: the simultaneous activity of indivisible but unique souls (atomlike ‘monads’ as described by Leibniz), each emitting a generative beam that overlaps the equivalent radiating vectors of others.

Thom’s interest in utopian thought is clearer with her grid-covered vases that double as models for sci-fi community architecture. Her gently fluid, hand-cut edges and undulating drawn lines that decorate the planes, eschew industrial or digital methodology while the structures feature a doubling of ceramic containers, a vertical stacking. In these drawn-on pots disguised as buildings, their efficacy as paired module / plant holders declares a protective optimism for the planet’s plantlife and the humans that hopefully will continue to dwell amongst it, while the more spherical forms seem to reference the design visionary Buckminster Fuller. The overt functionalism that Thom displayed in AAG’s Freedom Farmers survey a couple of years ago, with ceramic pourers and infusion devices, has been replaced by a referencing of ‘futuristic’ living spaces and models of community interconnectivity.

In Te Uru’s pairing of these artists’ works there is a certain amount of interactive wit, because Barry’s highly tactile drawings have a lot of spatial depth and Thom likes to push the opposite, emphasising with striations the flat planar surfaces of her compact, blocklike sculpture. Brought together they make a conspicuously successful juxtaposition. As indicated, I personally find Barry’s symmetrical acute angled works particularly intriguing - they are the show’s highlight - due to their sense of central axial folding, the receding versus flatness tension, their obsessive intricacy, and the peculiar (sadistic?) sense of ocular or bodily piercing that the ‘rays’ induce.