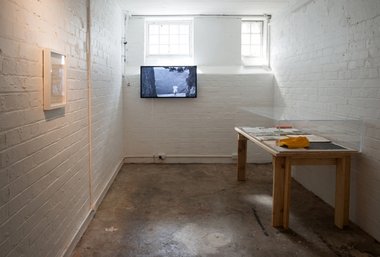 The real puzzle was the lack of auditory or video documentation (no edited soundtrack or samples) for a work that was about movement of sound and bodies, and exchanging of phrases from texts - carefully controlled in set phases throughout the day. The reasons may have been connected to the site-specific acoustic nature of the Mt Eden landscape, or that the documentation (tape) had subsequently decayed over the past four decades.

Recently, in one corner of the square-shaped floorplan of corridors that - with his large enterable bank safe - make up his lower (basement) galleries, Michael Lett presented a show of documentation of a June 1973 (Winter Solstice) performance by Bruce Barber in the Mt Eden Crater. It was approximately an eight hour event involving an assortment of drummers and percussionists, stationary text reciters (doubling as) moving text repeaters (with megaphones), a yellow hooded ‘Blind Man’ (Kieran Lyons) with his guides, plus various observers, video camera operators, and sound recorders - all slowly making their way back and forth spiralling in and out of the Mt Eden crater. There were more participants than casual ‘public’ - in fact such a distinction was deliberately superfluous.

The documentation at Lett consisted of a plasma screen of about 12-15 b/w slides taken during the day; a flat vitrine of some publications that discussed the event, placed alongside four books (referencing four disciplines: sculpture; cooking; medicine; anthropology), closed and fetishised that provided texts (now unseen), and some symbolic items of clothing; a framed handwritten manifesto; and on a corridor wall, some framed digital prints of diagrammatic drawings. There were also some other linear diagrams from a performance a couple of months earlier at Whatipu Beach that inadvertently confused any attentive visitor trying to figure out the processes involved, as the source wasn’t made clear; a ‘Blind Man’ figure was present in both.

The real puzzle was the lack of auditory or video documentation (no edited soundtrack or samples) for a work that was about movement of sound and bodies, and exchanging of phrases from texts - carefully controlled in set phases throughout the day. The reasons may have been connected to the site-specific acoustic nature of the Mt Eden landscape, or that the documentation (tape) had subsequently decayed over the past four decades.

As a sort of substitute for the lack of auditory documentation the show presented a poem/text/account (book opened in the vitrine) and later in a public reading, written by Wystan Curnow who was there on the day - especially between 10.30 and midday in the morning. This text appeared, alongside Bruce Barber’s own explanation, in Curnow and Jim Allen’s anthology, new art: Some recent sculpture and post-object art, that was published by Heinemann in 1976. It was also selected by Christina Barton and Robert Leonard for inclusion in The Critic’s Part: Wystan Curnow 1971-2013, IMA/Adam Art Gallery/VUP, 2014.

Curnow’s flowing poem is (on the page) a densely packed block of language that is about his listening to what is going on around him, and attempting to transcribe various auditory and thought snippets and verbalise visual observations - while acknowledging his friendships and familial relationships with participants/watchers that come and go. It features ellipses that bracket bursts of language, usually three to six words a pop.

…she picks up her small tambourine…cognitive function…with her…I’ve moved now to the East rim…sit myself down… at one of the fixed drumming stations…a rubbish tine lid hanging by string from the limb of a tree…remove them from the skittle…this’s is also where we photographed the Bombing of Auckland shots…I’m reminded thus that I’ve some prior knowledge of the strangeness of this Mt Eden…myself helping Sue, hugely pregnant and so barely to keep her balance as I helped her pick her way to the bottom of the crater… how we must‘ve looked from here, she is a white flannelette nightdress, her hair out…he is a large black coat and flying helmet…the therapeutic - the therapeutic… someone hits the rubbish tin lid… there’re four of us sitting here at the station and just over the rim’s a reader, microphone, megaphone and book…reading recipes in phrases…phrases coming back and getting slowly closer now…against the green grass…the sun noticeably higher now…I’ve moved again, I’m going round the crater anti-clockwise and now I’m sitting on the North rim of the crater looking across to where I sat when I arrived…it’s a long way over there…my back to the sea…a sudden burst from a large wooden rattle down in the crater…two girls…then, a mother and daughter…a big ginger dog panting and shaking at my elbow…

Curnow’s language has a vividness, a flair for precise description; especially when sparked off by acoustic sensation. It’s textually available - not via a gallery vitrine but - through finding one of the above books, digging out the specific reference (‘Bruce Barber: Mt. Eden Crater Performance’) and immersing yourself in the words.