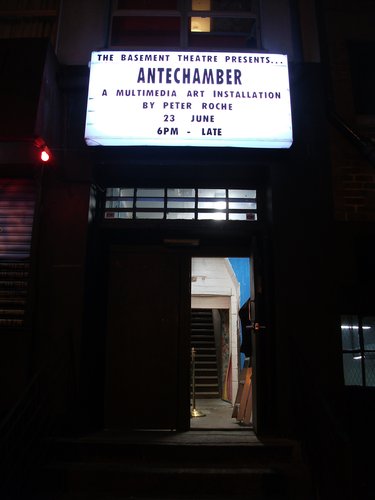 Here the results of catastrophe and conflict became the new ‘nature', calamity the ordinary and usual. Roche's walk-through diorama had the ring of Beckett and Ionesco. There were less overt metal signs than in last year's Ironbank presentation, for instead it was characterised by theatrical lighting and temporary wooden constructions - set into a suggestive ambience of landscape and urban ruin, the turning clock-hands of time the dominant motif.

The Basement Theatre and Studio

In recent years performance artist and sculptor, Peter Roche has been showing his distinctive, light-incorporated works in his Point Chevalier studio, Saatchi’s, and the Ironbank building; sometimes for a week or more, other times for one night only. A few days ago he presented a group of sculptures cohesively as an immersive installation in a new venue, in the old Basement theatre and studio, with some framed b/w photographs of the same work in the bar. Only for a few hours.

Antechamber utilised both upstairs and downstairs facilities of the Basement theatre, differentiating between two different types of light, and movement of light - while elaborating on an apocalyptic Armageddon-type theme that made the suggestion of ‘waiting’ implied in the title powerfully evocative.

Both floors featured light that cast dramatically elongated shadows, but with piercingly intense white light - mixed with washes of ultra violet - in the top two rooms (often with stroboscopically-programmed torches fastened to a barrow, projecting discs of illumination), and in the small theatre below: muted, but complementary harsh reds and greens; a wall projection of shredded, scrambled numbers in a churning matrix; various items of camouflaged, anti-landing defences, radar dishes and battlements.

The upstairs rooms, with their pulsing torch-beams, projected images (such as two smithies hammering on an anvil) on suspended globes, and various wooden or projected clock dials, spoke directly of the planet’s demise - with various metal signs announcing ‘the end’, ‘exit’, and ‘fini’. With various ‘blonded-out’ foxholes (made of ringed banks of sandbags), tripods, sets of painted headphones, obscure machinery and circles of speakers we also heard sounds of trickling water, driving rain, barking dogs and whistling gales.

Here the results of catastrophe and conflict became the new ‘nature’, calamity the ordinary and usual. Roche’s walk-through diorama had the ring of Beckett and Ionesco (that which what at one time seemed absurd now becoming vividly feasible).

There were less overt metal signs than in last year’s Ironbank presentation, for instead it was characterised by theatrical lighting and temporary wooden constructions (mixed with evocative items, like sandbags or sheep carcasses) - set into an ambience of landscape and urban ruin, the turning clock-hands of time the dominant motif.

Antechamber was confrontational in mood, but never bodily menacing like some of Roche’s past kinetic installations, and with a slight hint of Steampunk - but much rawer and expressionistic. It was deliberately ramshackle: akin to the deliberately incongruous, technically dated quality you also get with an art unit like et al. The last two or three Roche shows revealed his passion for manipulating light, creating theatrical effects using darkness. Here he was utilising a total space, improvising with materials in rooms he could modify, rather than displaying meticulously crafted, portable objects.

This work certainly looks exciting so I must pay a visit....just as an aside I get the feeling that Roche's ...

This work certainly looks exciting so I must pay a visit....just as an aside I get the feeling that Roche's work has been overlooked within the last decade because it is not "cool"....that it doesn't conform to a paradigm of academic politeness and is too colouful and expressionist.