Postcards from the Ivory Tower 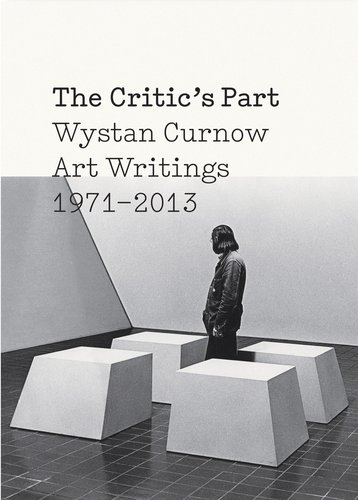 For the most part, Curnow's style, while not afraid to experiment, is very much informed by the New Journalism in the US; particularly, I'd hazard, that sneering, ill-fitted-white-suited goblin Tom Wolfe and doughty, indefatigable Robert Hughes. This comes across in the tendency to set up ambivalent rhetorical paradoxes, the intrusion of incidental real-life elements of the experience on the day, and a general air of world-weary jadedness since superseded in art writing by an international tendency to glib folksiness and faux-naivety.

In 1963 Wystan Curnow, second generation of one of New Zealand’s great cultural dynasties, travelled to New York in 1963 to do a PhD in American Literature. In 1970 he came back (much to the cultural cringe of the New Zealand art world at the time, from which it has never entirely recovered) and commenced to write about contemporary New Zealand art. This was particularly significant for a number of reasons; it was the first time that professional art criticism looked like something one actually did (at least between the Bombays and the Waitakeres), and the home product (particularly post-object) could legitimately be compared and contrasted with the product coming out of the lofts of what was then art’s imperial centre. Four and a bit decades later the result was collected together in the book The Critic’s Part: Wystan Curnow’s Art Writings 1971-2013, edited by Christina Barton and Robert Leonard, and put out by Victoria University Press in 2014. It’s probably the most important book on New Zealand art covering the period and acts as a nice continuity from Francis Pound’s The Invention of New Zealand: Art and National Identity, 1930-1970 (AUP 2010).

There wouldn’t be many people who have assayed the New Zealand (well, mostly Auckland really) art scene as thoroughly, knowledgably and over as wide a time frame. Certainly The Critic’s Part fleshes out late twentieth century New Zealand art in a way that is long overdue. As one might expect, all the older white male modernists are there, Billy Apple, Colin McCahon, Max Gimblett, Gordon Walters and Stephen Bambury, looking resplendent. There is some truly wonderful stuff, especially on conceptual and experimental art that few people had any ability to judge. The 1985 piece on Phil Dadson and the Scratch Orchestra and the poetic-impressionistic L=A=N=G=U=A=G=E-inspired (at times frustratingly so - never upstage the talent!) 1973 account of Bruce Barber’s Mt Eden Crater Performance are gold. One can see the self-conscious note form of something like the 1983 “Identikit Portrait of an Expressive Realist” having an influence on the prosody of Justin Paton and Jonathan Bywater. The 2007 piece on Tom Kreisler may very well be one of the most significant things written about that much-underrated artist. Canonical stuff.

There is rather a lot about Billy Apple. I mean a lot. So much f***king Billy Apple. Four essays of which Apple is the exclusive subject. Now I realise Barton probably had this artist foremost in her mind with the big Auckland survey she curated for this year, no doubt already fermenting away during the book’s assemblage, but come on: Apple’s significance is primarily that he was early and he was ours. Fair dues; he invented commodity art at least a generation before the art world caught up, and he kept on trucking with it, blissfully immune to the vicissitudes of taste, to the present day. That’s about the beginning and end of it. I really don’t think that warrants more space than anyone else when so many have been left out. Curnow’s 1975 article “Doing Art Criticism in New Zealand” is notable by its absence and would have been far more deserving of one of those slots.

For the most part, Curnow’s style, while not afraid to experiment, is very much informed by the New Journalism in the US; particularly, I’d hazard, that sneering, ill-fitted-white-suited goblin Tom Wolfe and doughty, indefatigable Robert Hughes. This comes across in the tendency to set up ambivalent rhetorical paradoxes, the intrusion of incidental real-life elements of the experience on the day, and a general air of world-weary jadedness since superseded in art writing by an international tendency to glib folksiness and faux-naivety. Curnow’s jadedness, however, may simply be the culture-shock of returning to sleepy, complacent Godzone from the metropolis of which Hughes once memorably asked, “Could a city with such extremes of Sardanapalian wealth and Calcutta-like misery foster a sane culture?” Understandably so. Peter McLeavey had only been operating out of his Cuba Street gallery in Wellington since ‘68, Brooke-Gifford wouldn’t start up in Christchurch until ‘75, Art New Zealand wasn’t being published continuously until ‘76, and the public galleries were still inclined to a fustian stuffiness.

Certainly one feels that ennui underpinning Curnow’s seminal 1973 essay “High Culture in a Small Province” - seemingly, at least to me, consciously modelled, if unacknowledged, on Bill Pearson’s still very readable 1952 essay “Fretful Sleepers”. There is a definite shrill note of dismissive spleen bordering on the bitchy in “The New Zealand Young Contemporaries”, and the Big Apple scene receives some shameless Fernweh-fellatio in the opening paragraphs of “Morris Louis at the Auckland City Art Gallery”, both from 1971. Fair enough. Who wouldn’t? By the exuberant ‘80s the peevishness has died away. New Zealand was coming into its own and technology had dealt to the cliché of distance looking our way.

There are a couple cavils that irk me as a reader a couple of generations down the track. One causes me to echo the poet Hone Tuwhare writing about the South Island, “Where have all the Maori gone, for chrissake?” Ok, there is an awkward essay on Te Māori which shies away of any real engagement with what the touring of that historical taonga meant to Maori, but the thimbleful of references to contemporary Māori artists tend only to deal with them in the western/internationalist paradigms they work within rather than as Māori artists. In fact I think Māori tikanga gets more referenced in the discussions of Colin McCahon than any actual member of the tangata whenua. In saying that, however, given what happens when Curnow does address the awkward relationship of contemporary Māori art in the postcolonial context - the frankly bizarre “Gordon Walters and Jaqueline Fraser: Modernism and Maori Art” (1994 - mostly “Modernism” and very little “Māori”) and the mise en abyme awkwardness within awkwardness of his 1995 review of Francis Pound’s The Space Between, this is perhaps a good thing. Women are similarly light on the ground (Mais où sont les neiges d’antan!) unless as part of a group event, with Julia Morison (I don’t think I’m allowed to include et al since one is never sure which heteronym one is dealing with) as the only female artist to get an article to herself. Photography might as well not even exist.

What I find most problematic about the selection, however, is that despite the conclusory date of 2013, one might be forgiven for thinking every art school in Aotearoa had shut up shop somewhere around 1986 or so. Sure, there are multiple reviews post that date, but almost entirely of well-established artists who had come of age a generation earlier. Whether this is a deficit on the part of the editors or the author is impossible to say, but the 1990s and its flowering of identity politics might as well not have happened; no Shane Cotton, precious bugger all Peter Robinson etc. Some attempt is made to redress this with the rather misnamed terminal essay, “High Culture in a Small Province: Further Thoughts 1998-2013” - a sort of coda to the ‘73 essay which spends most of its time nostalgically reminiscing about the late modernist paradigms of the 1970s and ‘80s. Only three artists make the cut, the deserving if usual suspects Julian Dashper, Michael Parekowhai and Simon Denny, and even then Curnow seems to be trying to shoehorn them into those old late modernist paradigms.

The text for a presentation given at Te Papa’s 2004 The Seventies Conference (presumably an unimaginative but Te Papa-typical pop-cultural hat tip to the television programme That ‘70s Show 1998-2006) is entitled “The Seventies: Have They Reached Their Use-By Date?” My answer is an emphatic YES. The constant relating of postmodern and local developments to international late modernism grates after a while. If anything, one is left wondering if despite only being away for the ‘60s Curnow managed to miss so much local development independent of the menu touristique of mid-to-late Euro-American art while it was happening in front of him. The obvious influence of American sociologist Morse Peckham’s theory of “psychic insulation” or “psychical distance” (Curnow studied under Peckham at the University of Pennsylvania) seems to have inspired a peculiar reverse-psychological subconscious phobia of the local. As a critic Curnow rightly attempted to position New Zealand artists in an international (though mostly US-dominated Western) context, preferentially gravitating to those artists with an internationalist perspective, which, as a curator, he was able to promote internationally through his networks.

Unfortunately this resulted in some significant blindspots as a uniquely New Zealand art informed by postcolonial and geographical realities continued to evolve. Eppur si muove.

Brilliant book, but very much best when of its time.