The Pleasures of Movement 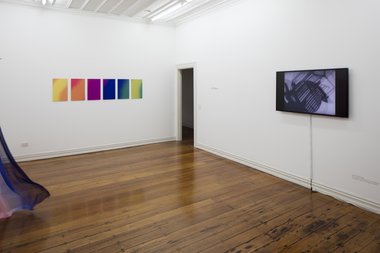 Within this clever line up of pairs of contrasting foils on two floors, we find two historic films from the thirties (on video), spatially positioned reflective or refractively coloured planes, and a work with vertical coloured bands on a light gauzy curtain activated by a whirring fan and a nearby static photograph.

Within this clever line up of pairs of contrasting foils on two floors, we find two historic films from the thirties (on video), spatially positioned reflective or refractively coloured planes, and a work with vertical coloured bands on a light gauzy curtain activated by a whirring fan and a nearby static photograph. This spread-out group show allows us to ponder the situation of moving images (colour versus b/w), the moving viewer and a moving sculpture.

In the big space downstairs Rebecca Baumann and Brendan Van Rek continue the reflection theme that Baumann explored here last September. Three thick (but hollow) ‘slabs’ are positioned vertically on the floor, with black mirrors facing outwards on their ‘backs’, and facing inward towards each other, blue, magenta and lemon yellow, on their ‘fronts.’

Inside that wide enclosed space the shiny surfaces reflect each other, chromatically transmute and (slightly) darken in ‘translation’. Their undulating rectangular planes are divided into horizontal or vertical sections so that the butted-together mirror edges take you by surprise in the way they ‘split’ any reflected figure walking through the encircled space.

Upstairs, on the other hand, Particle Wave, Grant Stevens’ line of six lenticular panels present an aberrant spectrum of diagonal blending that shifts when your body shifts - while crossing the small room. Fluffy blobs of colour hover around the top left /bottom right panel corners, repeat on the distant edges of adjacent panels, but are anchored (though evanescent) within a rippling horizontal grain.

Across the corridor we can hear from the room opposite the soaring clarinets of Don Baretto and his Cuban Orchestra, as their beguine (‘La Belle Creole’) provides an exuberant auditory accompaniment for Len Lye‘s wiggling and jumping coloured lines, handpainted onto his extraordinary 1935 film, A Colour Box - playing on a plasma screen.

The joyous and celebratory mood - in auditory terms - becomes less dense, thinner and more delicate when we become also aware, back in the ‘Grant Stevens room,’ of a music-boxlike soundtrack for the 1930 Moholy-Nagy film, Ein Lichtspiel: schwarz wess grau (A Lightplay: Black White Grey) - added only recently. The tinkling, brittle music is played by Indonesian musicians in a group that sounds, percussively and melodically, like a Balinese gamelan orchestra.

This Moholy-Nagy film is the big surprise of the show: an unanticipated treat. Though only in black, grey and white; it is nevertheless emphatically gorgeous, a series of images of swirling forms and cast shadows from his revolving Light-Space Modulator (1922-30); a mixture of moving steel discs and grilles, projected shadows on the walls, and double or triple exposures.

On the opposite wall Starkwhite have positioned an extraordinary Alicia Frankovich work that like Moholy-Nagy’s Light-Space Modulator, employs movement. Its motion involves an elegant old fashioned-looking fan that activates a thin muslin curtain stained with three vertical stripes. Oddly, one bottom corner of the curtain tends to wrap itself around the fan and tightly cling, while the other flails about wildly. High up on the wall above the top of the curtain (which hangs from a ribbon attached to pegs) is a photograph of an actor on a small platform. It appears to be a pun on ‘boards’, for he is arched over, bending backwards, and seems to be walking the plank. The framed photograph extends out from the wall, attached to it by hinges. It is coloured with similar stripes as the curtain, and so links his twisting but frozen movement with the flapping fabric.

This is a great show to explore, either from between the unusually coloured mirrors downstairs, or the wonderful video soundtracks upstairs. It’s a dynamic combination involving implied, real and recorded motion.