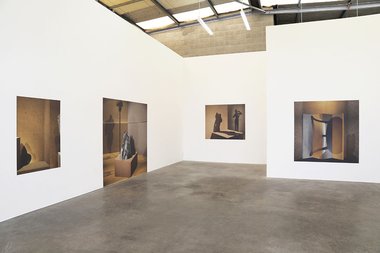 In directing interest towards formal and spatial relationships, Jenkinson curiously makes the subjects of these photographs entirely universal and detached, (paradoxically) from any specific time or place. Moreover, as large-scale vinyl prints, her photographs are seamlessly attached to the walls at a variety of heights and ostensibly randomly located spaces. The gap between gallery visitor, gallery space and artwork becomes imprecise.

In its subject and narratives, Megan Jenkinson’s Other Space is an exhibition that may initially seem problematic. A series of photographs of the interiors of prominent public galleries from around the world that includes, for example, the National Gallery of Australia in Canberra and the National Gallery of China in Beijing. Jenkinson attention is centred upon capturing glimpses and fragments of the items, objects and spaces artworks are displayed and contextualised within for public consideration and consumption. Outwardly, Other Space is an art exhibition about the exhibiting of art; therein lies the potential of its problem.

For some reason this is a subject that the professional art world is increasingly fascinated by, although it stands at the top of my list of exhibitions to avoid. The notion that the things that galleries and museums do with their resources is a worthy subject for an exhibition of interest to the public seems somewhat mistaken and little more than navel gazing. It is a bit like visiting McDonalds and getting to watch staff make the burgers, except for the fact that when the professional art world draws attention to their back or front-of-house it tends to be couched in eulogy.

The irrefutable fascination that the New Zealand art world has with itself, acquired credibility in the late 1990s with Neil Pardington’s touring exhibition, The Vault, a series of photographs of the collections and objects stored in New Zealand’s museums and galleries. It opened at the Christchurch Art Gallery in 1999 and travelled throughout the country until 2012. Art galleries in all the major centres responded with considerable enthusiasm, giving credence to its content and assuming as given that here was a subject that would be equally fascinating and entertaining for the public.

Yet, in spite of the apparent associations with an exhibition like The Vault, Jenkinson’s photographs are only superficially engaged with the activities of museum and gallery practice. Rather, the exhibition is more concerned with the actuality of the experience of a work of art and the realities and deceptions of images as central to that encounter.

Other Space turns its attention to the spaces, objects, shadows and surfaces of the environment of particular art galleries. Yet, in directing interest towards formal and spatial relationships, Jenkinson curiously makes the subjects of these photographs entirely universal and detached, (paradoxically) from any specific time or place. Moreover, as large-scale vinyl prints, her photographs are seamlessly attached to the walls at a variety of heights and ostensibly randomly located spaces. The gap between gallery visitor, gallery space and artwork becomes imprecise. In works like Harlequin, Parable of Shadows or Wearing down the point of words, it is as though Jenkinson has opened windows and doorways into a space and a world beyond the confines of the Jonathan Smart Gallery. Yet, even in the act of considering such a proposition, the white-cube environment of the gallery asserts its conscious presence, and the gallery visitor’s sense of self-awareness of their moment of engagement with the work becomes a subject in itself, and the very point of Other Space.

If any criticism can be levelled at the exhibition it is in Jenkinson’s frustrating commitment in titling her work with phrases that often seem overly considered, or far too serious and self-conscious. Parable of Shadows, or Wearing down the point of words are titles that overstate their message, representing the same kind of ‘worthy’ - but unnecessary - heavy-handed morality on-a-soapbox messages that pervaded Jenkinson’s The Virtues series back in 1996.

Indeed, it is Jenkinson’s choice of materials, her making processes and her selection of content for each image, that is essential to the success of Other Space, especially in the use of collage fixed to the gallery wall. It is as though she has found new and unanticipated ways to work with her trade mark materials and methods. Where The Virtues made extensive cut-and-paste use of collage in works on paper, now through new technology, Jenkinson considers the walls of the art gallery as the surfaces for her images, and this is central to the experience and success of Jenkinson’s most considered and agreeably perplexing exhibition to date.

On this particular occasion, she delivers an exhibition characterised by a maturity and unanticipated complexity that acknowledges the sincerity and authority of her practice. Other Space is a sophisticated body of images that speaks well of the work of an artist who has been refining her practice now, for more than thirty years.