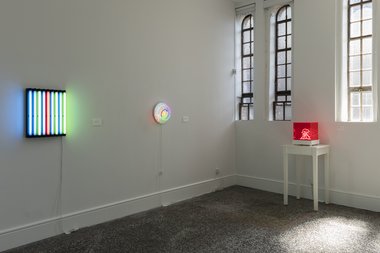 Of the three rooms, the small gallery of non-pictographic neons - featuring spirals, ‘knots' (on discs or in reflective transparent boxes) and vertical bars - is the most successful. As an intimate space, it showcases the sensuality of the media and Hartigan's treatment of coloured light radiating from carefully manipulated tubes as a form of painting.

I first discovered the talents of Paul Hartigan when, as a young artist living in Christchurch in the early eighties, I heard about the New Image exhibition, curated by Francis Pound for Auckland City Art Gallery. It featured seven artists: all men, all Auckland residents.

When I got hold of the comparatively lavish catalogue, I reacquainted myself with the two artists I was already familiar with long distance - Richard Killeen and Dick Frizzell who had considerable profiles through Art New Zealand - and found there were also  many there who were new to me - like Denys Watkins, Wong Sing Tai, Gavin Chilcott, and George Baloghy; and the guy who did the neon work on the cover and various brightly coloured enamel paintings of angular sculptures in barren landscapes: Paul Hartigan.

Years later we met when I got a job in New Plymouth. I discovered it was his home town and he had had his childhood and secondary education there. Now I’m in Auckland, and after discovering all the work he has done in this city since being a student at Elam, it seems astounding that this Gus Fisher show is his first survey in a civic institution. This event is clearly long overdue, though here cramped with only three rooms.

Don Abbott is well known through his writing and editorial work for Art New Zealand. He has written a densely informative (though over wordy when discussing the art) well illustrated book on Hartigan’s life, and the exhibition is designed to accompany the publication. In a sense the presentation is a taster, a brief supplier of samples. The three spaces of the show roughly deal with the neon works, films (student and more recent) and larger items, and paintings and prints.

Of the three, the small gallery of non-pictographic neons - featuring spirals, ‘knots’ (on discs or in reflective transparent boxes) and vertical bars - is the most successful. As an intimate space, it showcases the sensuality of the media and Hartigan’s treatment of coloured light radiating from carefully manipulated tubes as a form of painting. His love of neon - with its scratched (drawn on) surfaces and internal gaseous/chromatic explorations - correlates tightly with his fascination with shimmering enamel lines with seeping edges, layered underpainting and/or dripping overpainting: when painted on board or mirror.

Wisely Abbott’s selection in the small room avoids the use of glowing language, and so the best of the larger neon panels in the other rooms feature doodly glyphs, not readable text. With Hartigan, lettered texts that worked brilliantly when painted or with Xeroxed configured objects, tend to flounder when written as neon letters. Putting a commonplace text in linear neon print with a black background like a conventional commercial sign makes them disappointingly ordinary.

The big room, with a salon hang, allows us to see key examples of Hartigan’s seventies and eighties paintings. Two of the walls are wonderfully exuberant, but I found the other two comparatively lacklustre. The darker enamel on board paintings on the end wall opposite the door (and the nearby, plainer ‘infinity’ ink on vinyl works) make him look fusty and subdued, while the scanned and enlarged plastic Pioneer Dolls (the Māori component) childhood toys from inside Sanitarium cereal packets - made seven years ago - look corny with their melodramatic underlighting and black background. His wonderful ‘H-print’ images on canvas of eighties Auckland signage are alongside, but unfortunately are under-represented with only two examples. They - as historical documentation - are key elements that reveal his passionate love of (and considerable knowledge of) public advertising as a visual contribution to the urban landscape.

Hartigan works best when he is a brazen show-off. Earnestness and contemplative introspection, while indisputably part of his personality, are rarely effective in what he makes. His real forte is his interest in technology and how electrical (and printed, digital or painted) optical effects work, but at times it can be obscure. Usually it helps him anticipate the bodily responses of the gallery viewer. He knows how to exhilarate.

For some reason, that excessive and celebratory side of Hartigan is a little curtailed in this selection, as is his humour. Here it is sanitised and too cautious. For example, works like Treasure Chest (1979), Cactus Cock (1972), or Twot (1979) would have introduced some earthy vulgarity and made the ambience less academic, and cheekier.

So overall, the small neon room is the immersive treat worth checking the show out for, as is one long wall of sumptuous enamel paintings. They will repay many visits. Though uneven, this is an important show - but hopefully one day a larger Auckland institution will examine Hartigan’s practice in more depth.