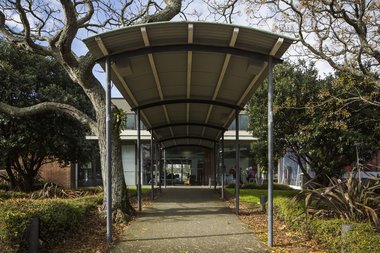 'Scale' is divided into two sections. The first short portion (1 min 30 sec) has the notes of one of the different Asian (cultural) musical systems hummed in sequence in order to accentuate its distinctive aural structures and characteristics. It alternates with the second (3 mins) section that has all five playing simultaneously through the four speakers. This enables the five scalar possibilities to be methodically examined in isolation.

Using the front entranceway to Te Tuhi that is carefully fitted out with four speakers (over the path that leads to the door), Olivia Webb follows Torben Tilly and Richard Francis in presenting a sound work for attentive visitors. Her contribution is a modified version of a five channel work she recently presented at AUT in mid-November as part of a post-grad Master of Performance and Media Arts programme.

Webb is a Christian, a Catholic who regularly attends Mass, and being trained as a classical choral singer, when she came to Auckland she happened to notice that within the multicultural worshipping environment that she participated in, there were unusual tonal accentuations to the scales of the western hymns - according to the communities she was singing with. So extending this idea as an elaboration of her fondness for Gregorian chants - as part of her MPMA programme - she constructed a work for five channels where the western choral scale of Veni Sancte Spiritus (Come Holy Spirit) was blended into the listening space with four other subtly modified versions. These non-western variations referenced the Indian Bhairavi Rāga scale, the Indonesian Pelog Gamelan scale, the Chinese Qing Shang hexatonic scale and the South Korean p’yŏngjo pentatonic scale.

There is a wit to this blending because Veni Sancte Spiritus is normally sung at the Feast of Penticost where the Holy Spirit (according to Catholic doctrine) is meant to have descended upon the twelve apostles, giving them the ability to speak all languages, and to effectively communicate with all peoples. Form and content fuse seamlessly here.

At AUT with the recorded version of the Webb’s installation, five speakers positioned high on stands played the ‘five cultures’ version, the boxlike ‘furniture’ being surrogates for five standing figures. A sixth was added when Webb herself participated during performances where she sang the chant live in the austere lecture room. However for the Te Tuhi version, the four overhead speakers (almost hidden) in the canopy are much less anthropomorphic visually, and have less spatial separation, while the Gregorian version is evenly mixed throughout.

Scale is divided into two sections. The first short portion (1 min 30 sec) has the notes of one of the different Asian (cultural) musical systems hummed in sequence in order to accentuate its distinctive aural structures and characteristics. It alternates with the second (3 mins) section that has all five playing simultaneously through the four speakers. This enables the five scalar possibilities to be methodically examined in isolation.

For listeners used to traditional Christian choral music, Webb’s installation is discreetly disconcerting through the presence of various dissonant harmonies that keep bubbling up. They sound ‘out of tune’ to western ears; oddly abrasive and discordant; subtly sour: in a way that is not immediately obvious when you first encounter the music. Of course being outside, with the passing traffic and occasional chirping sparrow as well - and with the asymmetrical speaker formation - the combination is pretty nuanced. It’s a fascinating project on many levels.