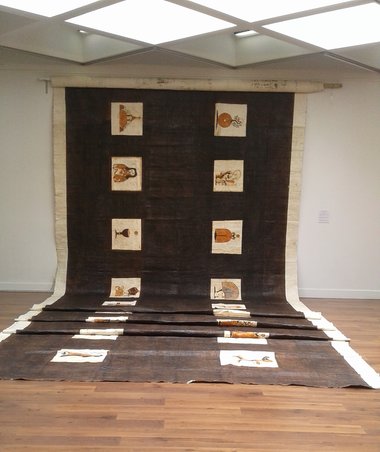 These images, mainly of religious iconography, represent the artist's reflection on the historic role of Christianity in Tongan life. Together they take on a somewhat sardonic and satiric tone particularly with his use of the dollar sign branded across the bleeding heart of the Christ figure. The title of the work, Onotu' ofe'uli - Onotu'ofekula, (which loosely translated means, “strands of colour inextricably connected to the qualities of red and black”), gives nothing away in regard to the critical nature of the piece.

The same annual art awards from year to year will inevitably vary in quality. That’s just the nature of the beast. In this regard, the most recent Wallace Awards (late 2015) provided a particularly bumper crop.

The Paramount winner must rank as one of the largest single works ever made by a New Zealand artist. Not that size matters or means all, but it is a spectacular sight to behold. Unfortunately - at 4.4 m by 18 m - the work is so big it is not able to be displayed in its entirety, in the space provided. Most of it sits rolled up around a large tube suspended near the ceiling of the Wallace Gallery in Morrinsville, while a small portion cascades down the length of the wall and trails along part of the gallery floor.

Made of Tapa cloth, it is a collaborative piece made by Visesio Giasau, a Tongan born artist (resident in New Zealand for 20 years) and his wife, Serene Tay, who with a collective of Tongan women created the fabric on the island itself. The piece was so large it had to be cut in half in order to be transported by plane back to New Zealand.

On the surface of the cloth there appear at regular intervals 23 stencilled designs that act as a kind of border or hem along the length of the ‘canvas’. These images, mainly of religious iconography, represent the artist’s reflection on the historic role of Christianity in Tongan life. Together they take on a somewhat sardonic and satiric tone particularly with his use of the dollar sign branded across the bleeding heart of the Christ figure. The title of the work, Onotu’ ofe’uli - Onotu’ofekula, (which loosely translated means, “strands of colour inextricably connected to the qualities of red and black”), gives nothing away in regard to the critical nature of the piece. Traditional artefact has been used here against what the artist perceives as the abuses and excesses as a result of what has morphed in that tradition, post nineteenth century, with regard to current Tongan belief and practice.

What is particularly good about the Wallace Award is that there are several winners. Share the joy. Spread the money and opportunity around. And the judges (there are several) judiciously spread the accolades across a variety of mediums. Painting, sculpture, photography, drawing and print all got a look in. No hegemony here.

Andrea du Chatenier’s large and imposing sculptural piece, Lucky Man, made of clay, steel and cloth, took out the Jury Award. What attracted my eye, after taking in the rather large regal head and beard of this patriarchal ceramic figure, was the deconstructed patched pinstriped suit used to clothe her creation, made from old and reconstituted jackets. It was all communicated in this slightly shabby, clever, reconstruction.

Hugo Lindsay was the Kaipara Award winner with a modest and minimalist abstract, entitled, Strip Club or Massage Parlour. Constructed of graphite compound and spray paint, it was a delicate and evocative interpretation using pink and blue tones whose suggestive forms played off against other rougher configurations that bore the imprint of masking tape. A nice judicious frisson.

Rose Myer, First Runner Up, worked a Dadaist trope with a cardboard box and squiggles with ballpoint pen on paper, while the Vermont Award winner, Russ Flat, played with the idea of nostalgia in her photographic reconstruction of a former time whose subject was a roller-skate champion meet. Second Runner Up, Virginia Were, captured with telephoto lens the intimate moment of two people enamoured with each other in a setting that suggested some kind of wildlife preserve, which she aptly titled, Human Zoo.

There were some old hands at the game who were present - Eion Stevens and Mary McIntyre, but of the others who caught my attention, Rohan Hartley Mills with his Elevated Painting, pronounced in dramatic form that painting is not dead. On a large extended thin wooden ladder-like construction that acted as a kind of platform, he had positioned his abstract work, which was painted in stripes high above the viewer, as if to signal its elevated importance. On the other hand, as a complete package, it took on the appearance of some surreal deckchair from the 1950’s that only Alice from Wonderland could position herself in.

P J Paterson’s The Dark Playground, involved a clever use of video where the image remained completely static, like a still shot of a landscape, but where a single and constant dribble of rain is discernible. These re-imagined constructed images of ruined wastelands are part of the artist’s ongoing environmental concerns.

Of particular note in the show was the abundance of abstract works that demonstrated the capacity for new life to be breathed into old forms. Matt Dowman’s large canvas with highly colour notations gave Pollock a fresh look; Noel Ivanoff’s subtle drags of paint across an aluminium surface were intriguing; Roy Good’s bisecting stripes added to the oeuvre in new ways; Seung Yul Oh gave abstract forms a fresh and inventive twist; Jonathan Organ reworked Malevich while Jessica Pearless played with the juxtaposition of squares in delicate and arresting colours and configuration.

All in all a visual feast.

It is marvellous to think of Visesio Siasau's sensual and mysterious Western Polynesian images, with their suggestions of windy atolls ...

It is marvellous to think of Visesio Siasau's sensual and mysterious Western Polynesian images, with their suggestions of windy atolls and epic vaka voyages, appearing in the cow town of Morrinsville, in the almost continental hinterland of Te Ika a Maui! I started to write a response to Peter Dornauf's interpretation of Siasau, and ended up putting it on my blog, rather than inflicting my long-windedness on EC readers: http://readingthemaps.blogspot.co.nz/2016/03/pluralism-and-paganism.html