The Obscene and the Sacred 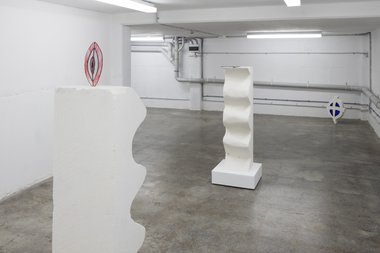 So what's this all about? Is it about love, horniness, the itch to copulate, or something more distanced, more cerebral - about social pressures to date or seek heterosexual sex, or in recent more liberated times, any variety of sex? Is it about being trapped into having too much sex, of getting stuck on pleasure. Perhaps maybe, sex addiction?

Mason Vincent
Sorry, I can’t, I’ve made other plans

It’s a labial vesica piscus made in stained glass, so there is not much subtlety: a cunt rendered in ecclesiastical materials, but resting upright on a knuckle shaped plinth made of carved Oamaru stone. Mason Vincent’s exhibition has half a dozen sculptures adroitly placed in and around Glovebox’s L-shaped space, and most of them somehow reference the primary female organ. They are clunky and seemingly deliberately not well made, featuring flat stained glass / leadlight forms, mixed with polished bronze and soft white stone.

The two dominant vertical stone forms are awkward. They do not show the expected virtuosity of some carver sculptors, like say Denis O’Connor or Mark Whyte, whereas a cast bronze cigarette lighter (set in a wall) such as what you might find in the dashboard of a sports car, does. The spaced apart, rippled, wide obelisks seem capable of interlocking, and so reference the tubular insertions of the cigarette lighter and a hypothetical bullet in the barrel of a black flat glass gun resting on the second curvaceous plinth.

In a far corner is another vulva, of white stone and dark blue glass; a squatter chunkier version that with its central cross could reference Christianity or a gun sight. These works are quite sinister with their allusions to violence. Hanging from the ceiling across the room is the back view of a young woman’s torso, wearing a flimsy bikini thong.

The title of the exhibition is a polite form of refusal or avoidance of contact (a way of backing out, of not getting caught up in engagement), while outside the entrance to the gallery is a hot pink neon sign, flashing on and off, of two upper and lowercase letters: ‘Kk’, a casual cipher for agreement or chirpy affirmation amongst online gamers.

So what’s this all about? Is it about love, horniness, the itch to copulate, or something more distanced, more cerebral - about social pressures to date or seek heterosexual sex, or in recent more liberated times, other varieties? Is it about being trapped into having too much, of getting stuck on pleasure. Perhaps maybe, sex addiction?

Or is it more attacking the broader assumption that all people have some sort of sex drive? The belief that every human - at some stage in their life - desires (bodily) a Significant Other. And that such assumptions about loneliness, coupling or coition are totalitarian, if not fascist?

There are lots of fascinating topics to think about here, revolving around social pressures and consumerism. Plus issues around perhaps the crafting of the objects and the possible intended irony of the neon, implying sex (like art) is a game. Serious, or not serious?