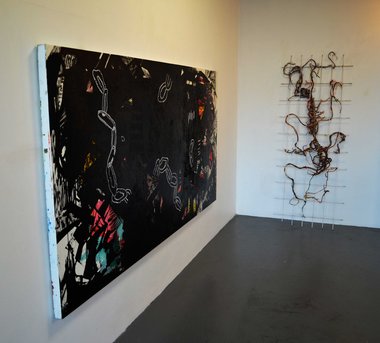 Jensen's largest work, a painting, understatedly called Big Black Painting - it is almost entirely black - is in the tradition of abstract expressionism but the difference here is the inclusion of imagery in the form of a chain, drawn delicately in white. It's something which becomes a motif she consistently uses throughout her work.

Black, for some reason, is New Zealand’s favourite colour. The All Blacks, Black Caps, Black Sox, et al. attest to this predilection. Is there some noir social/psychological underpinnings to all of this deeply embedded in the national psyche? Is it something to do with being so far away geographically from the centre of things? Or is there some repressed puritanical factor at work here that reaches back to our pioneer heritage, associated perhaps with the fear of the unknown?

McCahon, of course, made black his signature tune, often invoked in association with its opposite, calling on the ubiquitous light/dark symbolism of life and death forces. All very downbeat Biblical.

One of my favourites is a piece entitled B is for banana, painted on a large heavy sheet of clear plastic. It’s a gusty work, full of grunt, splash and dash, raw and graphic, imbued with primal energy with a touch of foreboding and mystery. But what it is, is simply imagery taken from or inspired by an early child’s reader: A is for apple etc. For all its rough brutality, it contains a sophistication of paint handling which is a delight to behold. Innocence meets experience in this piece given that the banana comes with the standard sexual connotations. Oh the ironies. The fact that the work is painted on clear plastic sheeting, adds to its feral quality, providing extra kick to the ambiguities that are amusingly played with here.

Her much smaller works on paper (black ink), in a series deliciously called Feelings, continue the same kick-arse comic tone.One of them depicts a pair of disembodied eyes and mouth accompanied with a text that reads: “Do you know this asshole will grab your ass, spike your drink and pretend to look after you.” A second work contains four stylized vulva shapes with the text “Just fuck it”. These are attended by a crowd of tally marks (hash marks) no doubt for keeping score. The text also includes two ticks that allude to the Nike symbol. This is clever, funny, knowing and amusingly critical all in the same breath.

A third work from the same series, Rub me sideways, contains the merest suggestion of a reclining figure surrounded by a collection of notations and marks - zig-zags, dots, hatchings, that in context work as a kind of seismic register of events. Two other slightly larger works on paper, that echo the Feelings series, amusingly called Fruit Salad, depicts various sliced fruits - apples, bananas - and engage with the same waggish sexual connotations. They all flirt with an idea that straddles the line between cheeky satire and affirmative celebration: a contest of oppositions and possible hybrid amalgamations.

Her largest work, a painting, understatedly called Big Black Painting - it is almost entirely black - is in the tradition of abstract expressionism but the difference here is the inclusion of imagery in the form of a chain, drawn delicately in white. It’s something which becomes a motif Jensen consistently uses throughout her work. (The chain finds a literal presence in some of her assorted sculptural hangings involving found objects). The black painting does possess bright shards of colour, pinks, greens, orange and red, which peak through a layered reworking of hues where black predominates. It is what gives the work its particular energy and vitality where the risk of the preponderance of black is perfectly weighted and finely controlled against the presence of colour. It is a bold and powerful piece.

The second artist exhibiting in the show, Eliza Webster, sees experimentation with past art historical forms as her modus operandi. This is most evident in Brain Hole, a large, delicate, multi-layered abstract that recalls something from an early de Kooning or a late de Kooning with its intricate pattern of interweaving and interlacing brushstrokes in tonal hues, plus pencil marks.

Flesh is Grass appropriates André Masson, as did Jackson Pollock, and then Webster dribbles painting down the surface of the work as if to underscore and make the connection apparent. She plays with and remodels the past with cheeky abandon to produce amalgams that acknowledge their sources. Blue Baby Blue, is another that does something of the same where falling Masson-like limbs are accompanied by falling leaves. Telescope turns into a surreal-like slime creature where amorphous shapes are juxtaposed against a grid of black stripes.

Clash of art historical forms are the raison d’etre here. Can new life be breathed back into these well worked tropes? Webster is not going to die wondering. Such appropriation exemplifies the title to the show, Creep.