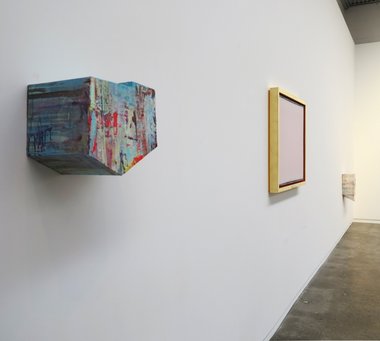 With these three types of painting, the three contrasting methodologies lock in so that Vary and Tomescu are an obvious pairing in terms of surface and dense mark making, while Vary and Nikolic share an interest in planes and anticipation of viewer movement.

This exhibition of three artists intrigues because of the interacting ‘conversations’ generated by three very different sensibilities: painting, and hybrids with wall relief sculpture - firing off against each other.

The ‘hybrids’ in fact come from Elizabeth Vary and she is the pivot contributor to the show, having four works, while Tomislav Nikolic and Aida Tomescu have two each. Yet the result is nonetheless a satisfying balance.

Vary’s projecting paintings are made of heavy cardboard and as objects are highly architectural. They look like inverted buildings, ramps, coffins and signage arrows, while their surfaces are covered with a multitude of coloured paint treatments, from thin washes and dribbles, metallic hues and smears, to thicker encrustations. They have an added drama because they are hung at different heights: sometimes high up, other times very low.

Tomislav Nikolic‘s paintings tease out the planar structure of conventional stretcher framing, inventively exploring the possibilities of unusual (often ignored) surfaces via deft colour positioning and shrewd chroma choices. The mood is usually buoyant, exacerbated by their symmetry, their rectangular simplicity, and a use (or rejection) of different mouldings.

Aida Tomescu‘s large hessian paintings on the other hand, feature a more ostensibly ‘spontaneous’ approach, with Twombly-like scratchings, dragged smudgy swirls and spasmodic splatters, wiped daubs and streaming dribbles, involving the expressive use of a wide range of brush types. The physicality of her energetic mark-making, and high temperature of the earthy or floral colour choices, is a crucial component.

So with these three types of painting, the three contrasting methodologies lock in so that Vary and Tomescu are an obvious pairing in terms of surface and dense mark making, while Vary and Nikolic share an interest in side planes and anticipation of viewer movement.

All together these nine works make a distinctive hang. The long gallery wall at Fox Jensen is used particularly effectively, with four works aligned in a striking top-left to bottom-right slope. The Tomescu works are well made, but as representatives of a genre they are not as groundbreaking as those of Vary and Nikolic, though overall they provide a particular chemistry that is necessary for the setting up of the striking presentation. A memorable dynamic collectively.