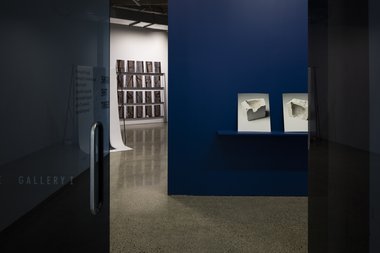 Bjarki Bragason designs delicate, carefully constructed (at AUT) graphite stained wooden stands (leaning against a wall, or freestanding) to hold his floppy documentary images of geological samples. There are also more conventional shelves for curved photographs of moulds made from lumps of black ice. These unusual image/objects meditate on planetary time by way of long cores of mineral sedimentation used by scientists when injecting CO2 to artificially accelerate fossilisation, and erosion from rapidly melting ice shelves in Greenland.

Examining the theme of crumbling consumerist utopia in one thread, and climate change and its alarming attendant shifts in natural phenomena in another, the seven artists (including four New Zealanders) in Imagining The Present have been coordinated by The Distance Plan, a (mainly) Auckland/ LA based eco-activist publishing group that includes two of the artist participants and curator Abby Cunnane - who wrote the accompanying essay. As is usual at St Paul St, there is much video (with sound), and a lot of photography and sculpture - mixed this time with poetry and spoken /sung or read word.

Bjarki Bragason designs delicate, carefully constructed (at AUT) graphite stained wooden stands (leaning against a wall, or freestanding) to hold his floppy documentary images of geological samples. There are also more conventional shelves for curved photographs of moulds made from lumps of black ice. These unusual image/objects meditate on planetary time by way of long cores of mineral sedimentation used by scientists when injecting CO2 to artificially accelerate fossilisation, and erosion from rapidly melting ice shelves in Greenland. Bragason has a flair for making unusual photographic presentations where form comments on content. It is also as if he hates the conventions of the white cube (too time specific?) and wishes his images to avoid them at all cost.

Nicholas Mangan is well known in Auckland, through his shows at Hopkinson Mossman. In Imagining The Present we have a borrowed Te Papa owned sculpture, a hefty table made of solid coral limestone that refers to a flippant comment made by Bernhard Dowiyogo, the ex-President of Nauru, about selling coral furniture to tourists when the fossilised bird guano, the fertiliser on which the island’s economy was based, runs out and the ancient coral limestone base underneath is exposed ripe for exploitation.

Shannon Te Ao’s video for many will be the highlight of the exhibition. Against a darkened backdrop and a sequence of 4-5 isolated pot plants - illuminated by mostly coloured lights - Te Ao (unseen) reads a poem by New Zealand writer Noeline Arnott that seems to be about intense sorrow or loneliness. It starts with the writer looking out a window of a hotel bedroom in a strange city as the early morning’s light is emerging, watching ‘the seabirds wheel and soar amongst the chimneypots.’ The writer speaks of ‘her need to speak my own language’ and her words fade away to be replaced by the haunting electronic drone of a cello-like organ.

Natalie Robertson’s three part contribution also uses the written word, in the form of a lament - written by Hone Rongomaitu for Pahoe, the drowned brother of Te Arakirangi - to be read in a photographed book of songs initially sung by Sir Aspirana Turupa Ngata, and heard sung (in this case) by Rhonda Tibble. The book is positioned opposite a suite of four of Robertson’s large photos taken at the Waiapu Ngutu Awa (river mouth) on the East Coast where flood debris from Cyclone Bola was used up, the Waiapu River being the site of the tragedy.

Shifting weather patterns, altering populations of flora and fauna, and human farming activities are all part of Amy Howden-Chapman’s discussion about the philosopher of (nature) transcendentalism, Henry David Thoreau, author of the pioneering book of essays, Walden. Howden-Chapman’s video visits the forest and pond site of Thoreau’s famous philosophical project, and is installed alongside a curved projection of a wall that salutes an unusual LA petroleum industry pioneer, Charles S Jones, for ‘community beautification’.

Outside by the St Paul St footpath, in the front window gallery, George Watson’s installation (accompanied by poem) presents a strange ad hoc incubator (for children about to be born) that - with its pea straw - also doubles as a weird compost bed (with its rough recycled wooden sides) which might nourish even later generations. The World Continues to Infect has a layer of sago (not polystyrene plastic beads) so it is definitely not eco-hostile (the sago of course has had its toxins removed), yet mixed in are rash-inducing soapflakes (for night-time ultra-violet radiation?) but with Epsom salts. It seems like a comment from a younger generation to an older one, a highly ambivalent plea about hope.