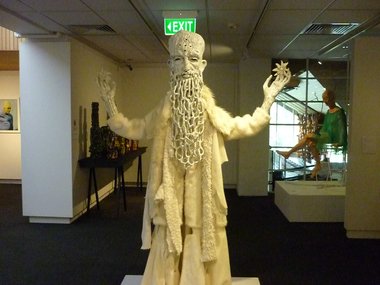 'Being Andrea du Chatenier' at Waikato Museum is a mini retrospective of du Chatenier's work (2000-2016) that is gloriously excessive, mining through the detritus and midden heaps of 70s and 80s popular culture for her props. She invents a range off-beat scenarios to work her various tropes.

We can do laconic humour here in these islands; we can even on the odd occasion manage a little satire and parody - but you won’t see a lot of it showing up on polite white gallery walls or gracing manicured polished concrete floors of upmarket avant-garde art spaces. For all our trying, (“At last a happy painting” - Richard Killeen) we still exist under the shadow of Colin McCahon. New Zealanders are a serious bunch, still gnawing their teeth over post-colonial discourses and hankie screwing when it comes to matters of postmodern gender politics.

But every so often someone shows up with a devil-may-care stripe, bucks trends - and stands apart with sufficient rambunctious wit and jest to deliver us all from the earnest ones.

Andrea du Chatenier is full of surprises. She could be described as the Arcimboldo of the New Zealand art scene. Life size ‘My Little Pony’ made of polystyrene; a woman’s head constructed of shells; men wearing dog masks. It’s Surrealism meets Pop meets Feminist rhetoric - in a heady mix where glitter, platform shoes and ceramic concoctions that look like underworld coruscations preside.

Being Andrea du Chatenier at Waikato Museum is a mini retrospective of du Chatenier’s work (2000-2016) that is gloriously excessive, mining through the detritus and midden heaps of 70s and 80s popular culture for her props. She invents a range off-beat scenarios to work her various tropes.

One example involves a series of photographs entitled, Captain Kirk’s Girls where she postulates a narrative of sexual congress between Star Trek hero (“Gone where no man has gone before”) Kirk, and female aliens, the offspring of which are hybrid creatures sporting large misshapen heads, snouts, and other strange physiological anomalies.

These are human models made up with various prosthetics which are then photographed, wearing an assortment of costumes that echo the Star Trek team. Such spoofs send up the masculinist world of the era, using lashings of irony and humour.

The hybrid also features in another photographic series, Pack, in which male models, complete with an assortment of masks and face paint, are made-up into dog/human visages. Man becomes dog becomes man in a mutant display of pantomime-style portraits. Man’s best friend morphs into man and vice versa: the process is made to look just a tad canine silly. Woof.

But it is the work called Bearded Prophet where male self-importance is properly and adroitly dressed up and down. This larger than life ceramic sculpture, a preposterous and portentous bearded figure, stands with arms dramatically raised as if addressing the world from some lofty height, baring flowers in each hand like some latter-day seer come to save the planet or its souls.

It is the large voluminous and ostentatious beard in particular, choreographed in intricate looping lines of clay that make the figure ludicrous, pompous and ominous all at the same time. That and the fake fur coat, or bits of coats cobbled together in a kind of bricolage, makes this male figure with a Jehovah-like demeanour appear somewhat dubious. But only marginally because du Chatenier has constructed this creation along a fine line that hovers somewhere between someone you might want to fall down and worship and someone who you know needs his arse kicked. The balance is deliciously just right.

The life size ‘My Little Pony’ sculpture in polystyrene, (Golden Primitive in Louboutin) mounted with a gold glitter embossed ersatz Nigerian fertility figure has the same iconoclastic effect. Worship never looked so subverted on so many levels; obsession and perverted value never so undermined.

Lowly materials like polystyrene has been used before for sculptural means by artists such as Peter Robinson, but in du Chatenier’s hands the hierarchical subversion is made more direct, particularly when she carves her nymph, Daphne, spelt Daffnie. The story of an attempted abduction and rape by Apollo is alluded to here but the artist by thrusting a few pathetic sticks into the body of her model to mimic the story of transformation and escape, comes with a more disturbing message. The age of marble is over and so is the one of miraculous escapes, but the reality of rape is not.

Her woman of shells (Water Speaker) indulges in a baroque construction that playfully recalls Venus born of the sea and riding on a clam shell but this concoction of clam shells was born inside the mind of an artist playing with high and low hierarchies involving the use of elements of the theatrical.

Du Chatenier can do rough and she can do refined, the latter as evidenced in a range of exquisite ceramic portraits, one (Bird Watcher with Albino Huia) a male head sporting a suave fifties coiffured hair style, is staring at his disembodied hand holding a Huia bird that evidences the stigmata on its breast.