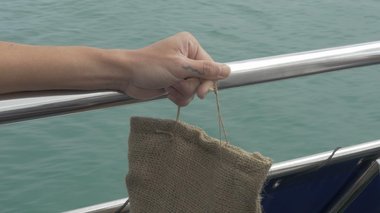 Whilst for those unsympathetic to the notion of spirituality this work could alternatively be seen as an amusing nihilist, if not abstract - and indeed poetical - gesture that is attractive because of its strangeness, its main point is that of the granules of earth are perceived as possessing spiritual properties, and Waiheke Island as a site being forced a hundred years ago to lose some of those qualities.

Jeremy Leatinu’u is well known for his solo performances that serve as community interventions in South Auckland and which he films to make into videos. The performance behind the video he is currently presenting in Te Tuhi is a work he made last January for the recent HEADLANDS: Sculpture on the Gulf, based on Waiheke Island. It involved a large number of people, a group of supporters to help him transport five hundred hessian bags of ‘mainland’ dirt from Auckland’s main ferry terminal, across Waitemata Harbour on the boat, to Waiheke Island.

This action was a symbolic ritual to compensate for and acknowledge large amounts of sand, gravel and shingle taken from Waiheke in the early 1900s for road building work around Auckland City, used for the construction of various civic projects like the Grafton Bridge. Whilst for those unsympathetic to the notion of spirituality it could alternatively be seen as an amusing nihilist, if not abstract - and indeed poetical - gesture that is attractive because of its strangeness, its main point is that of the granules of earth are perceived as possessing spiritual properties, and Waiheke Island as a site being forced a hundred years ago to lose some of those qualities.

Here the physical and spiritual are inseparable, for in this belief system the human race, the Māori people, and in particular the ancestors of the local Ngāti Pāoa community, come from earth. Through this action of transporting about a tonne of soil through the actions of a large number of tourists, visitors and locals - plus the artist’s support team who made, filled and stitched up the hessian bags - the material body of Waiheke Island is reunited and rebuilt.

Part of the film shows the reciting of a karakia over the bags of earth before they are taken on their journey over the water. Here (from the gallery hand-out) is a section of it translated, that explains the material and spiritual processes and their significance.

I acknowledge…
Tanemahuta ‘God of Forests’ the power & authority
It was he who took soil from the earth and created Hineahuone (the first female)
Then Hinetitama
Then Hineteiwawa
The Whare tangata - the house of creation, the internal bond
The womb of the women, we call ‘whenua’ the earth
There was born all humankind

We ask the Supreme Being to bless this sacred earth, this soil
To traverse the great sea, the waters of Te Waitemata /Hauraki Gulf
To become one with the soil on the island of Waiheke
Who will help in this monumental task and carry this sacred soil?
It is us all, it is people that are to travel the sea by ferry in this present time as our ancestors once did by waka
We ask the creator to guide and infuse the spiritual connection
To Shape, To Pave the way
To Bind Together, To Unite and Go Forth!

Part of the appeal of the film is due to Ian Powell’s cinematography, particularly his night-time shots of Leatinu’u driving into town along the coast from Tamaki loaded up with hessian bags. Looking at the behind-the-scenes activity of his team making the earth-filled bags is especially engrossing, the logistics of the artist getting it all together to co-ordinate with the Waiheke Headlands programme and the ferry patrons.

Five hundred bags is quite a lot of earth to convey to an island using mostly strangers, and for me I’m curious about the diversity of possible intellectual positions a co-operative ferry user could have, while still wishing to assist the project. You don’t have to believe that spirituality exists in dirt, or living human bodies, or anywhere else, to want to support Leatinu’u’s endeavour - or believe in Supreme Beings either. You can consider the ideational philosophical foundations to be misguided, but still find this collective performance greatly attractive because of its inventiveness, deft organisation and energy.