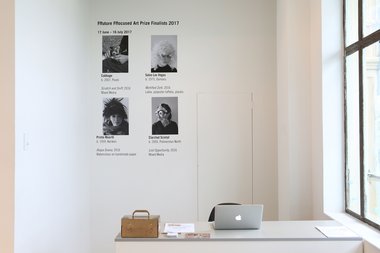 'Fffuture Fffocused Art Prize' feels like a Pop Will Eat Itself affair; an exhibition that assumes that nothing could be more interesting or amusing than the art world talking to itself about itself. Time might have been better spent asking questions such as could the selection process for the Walters Prize (and its jury) be made more transparent?

There are few claims that our most conspicuous national art award has made about itself that the ‘semi-imaginary artist-run initiative,’ Riff Raff (Li-Ming Hu and Daphne Simons) do not allude to or parody in Fffuture Fffocused Art Prize, an exhibition, arts project and performance that predominantly sets its sights on the Walters Prize.

It is an easy target to take aim at, probably too easy. Although there have always been criticisms about the processes and packaging of the country’s most prestigious award, Fffuture Fffocused Art Prize is an idea waterlogged in its delivery by its compulsive and self-conscious dependency on ironic commentary, serving little more purpose than to provoke.

The Physics Room’s media release for the exhibition’s opening is also in on the game, detailing the selection of the Fffuture Fffocused Art Prize‘s four finalists as ‘hand-picked’ from submissions received ‘through an anonymous nomination process… [blindly] assessed by the selection panel.’ The media release appropriates and parodies the style and content of such promotional material, referring to the high quality of finalists and the ‘incredible range of practices at play.’ Yet this persistent layering of parody upon parody to chastise the public persona of a national award amounts to little more than a prank for its own sake. Fffuture Fffocused Art Prize never declares any intention or the desire to hold the Walters Prize, or any other national art award, to account.

The problem is that astute commentary and insight are limited. Physics Room’s director Jamie Hanton offers up the sharpest observation, when he details the prizes to be awarded to the supreme winner. They include a ‘superb opportunity for emerging artists to exhibit in a professional gallery space, with the Supreme Award including a 6-month unpaid internship at the gallery.’

This is one announcement in which the satire gains a real sense of purpose. I am puzzled as to how public galleries and academic institutions feel comfortable, or at the very least indifferent to, describing unpaid work as an ‘opportunity.’ Yet it is an oxymoron that such institutions seem to have little problem in reconciling as a valid and supportive means of furthering the arts.

Unpaid employment is a taken-for-granted scenario in the professional art world. Volunteers installing exhibition or undertaking research should more correctly be treated as necessary employees worthy of payment. The notion that post-graduates from the country’s art schools with four or more years of study behind them, having an ‘opportunity’ to volunteer their time, epitomises the most unfortunate way in which the arts sustain themselves as an industry at the expense of its potentially most valuable resource.

Unfortunately, there are few other moments when Fffuture Fffocused Art Prize puts its head above the parapet, preferring instead to look at detail and fine print, directing attention to gallery media-releases and those familiar claims that that art is for everyone. There is even a ‘people’s choice’ award, that necessary element for any national award that wishes to claim that public opinion and taste are valued through its votes for a favourite work.

The backgrounds and arts practices of the four selected finalists are delivered a similar fate, each captured in the essential spirit of an appropriate and knowing art speak dialect. Sculptor Salvo Las Vegas is described as undertaking ‘sculptural investigations [exploring] the possibilities of replication and the interfaces between handmade and industrial processes,’ raising questions about ‘natural selection and the future of material industry and production.’

Cabbage, (a canine finalist), exhibits two semi-circular mounds of fur on plinths. These understated and unapologetic works are displayed alongside a video (filmed from a camera suspended from the dog’s belly) of Cabbage’s pups. It is difficult not to be reminded of the 2016 Walters Prize winner Shannon Te Ao’s video, Two shoots that stretch far out (2013-14). That is, whatever the competition, if there is an animal in it an entered work is probably going to win. This is the best joke that Fffuture Fffocused Art Prize has to offer.

Finalist Printo Moorth is a former nurse and art therapist, whose work is it suggested, may have a way of ‘communicating directly with the viewer’s nervous systems rather than language-based systems of understanding.’ The familiarity of seeing circular colour-washed ‘tie-dye’ works on paper that could have come from any community exhibition, not surprisingly, suggests otherwise. More frank and confronting is Charchat Scintal’s cut-and-paste video projection of found digital images that includes colour sensitive thermo camera images and twisting morphed land and cityscapes. This style-over-content experience puts its hand up as one of the better reasons to visit Fffuture Fffocused Art Prize - almost a health warning about the dangers of digital technology’s ability to seduce.

In the thoroughness of its attention to detail, Fffuture Fffocused Art Prize speaks directly to the familiar nuances of such public events, yet the possibility that the artists might be airing something of the art world’s dirty laundry is not tenable. It is an exhibition that seems too gleefully pleased with itself to support such a proposition.

Fffuture Fffocused Art Prize feels like a Pop Will Eat Itself affair; an exhibition that assumes that nothing could be more interesting or amusing than the art world talking to itself about itself. Time might have been better spent asking questions such as could the selection process for the Walters Prize (and its jury) be made more transparent?

This exhibition has too many one-liner prankster moments which, by drawing attention to the detail of their subject, only serve to validate its significance. One gets the sense that its presenters would equally be pleased to be active participants in the agendas they critique. Riff Raff are like wide-eyed next door neighbours, peering over the fence at the Walters Prize, wanting and waiting just to get in on the game.