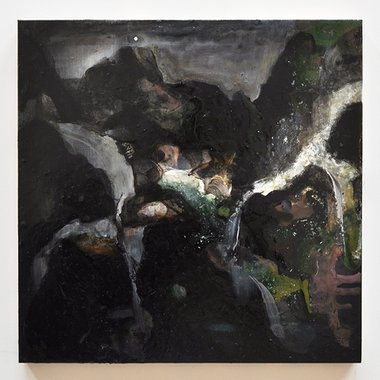 Relatively small, all around 300 or 350 mm a side, these little panels are like windows into another world and are, contrary to my clumsy description, incredibly effective. Built up of thick patches of poured, layered, and brushed oil paint, further volume and glistening wetness and lustre is added with strategically applied clear glaze. They appear to have an intuitive and improvised responsiveness to them, subsumed into tight and assured compositional control.

I shivered oddly in the cold, thin air,
And wondered where I was and how I came…

City Art Depot at 96 Disraeli Street, Sydenham, is possibly better known as a bespoke framing business than for its exhibitions, but for the last few years it has been an important proving ground for young and emerging Christchurch artists, as well as those more established but who haven’t quite managed to crack the dealer market.

Christchurch artist Clare Logan’s A Lingering Dark (12 May - 3 June 2017) is an example of the sort of interesting, easily overlooked work that City Art Depot provides a venue for. It’s landscape painting, oil on board, and amazingly enough, demonstrate that there’s still life in the old dog of landscape yet. Increasingly, though, that is secondary or in parallel with other concerns, whether that be as a setting for Postmodern/neo-Surrealist bricolage, or as a compositional form as an excuse to apply paint to a surface.

Logan’s paintings, on a continuum somewhere between cues signalled by Petrus van der Velden and Colin McCahon, nevertheless manage to peg out their own territory by lifting a trick or two from the Surrealists, Symbolists, and various Post-Impressionisms and Expressionisms. The scenes are otherworldly star-lit places beneath a tiny and distant moon, psychological and metaphysical, where luminous, gestural waterfalls plunge though the bold forms of dark and desolate rocks; a hint of Otira, a dash of the theatrical dramatics of Salvator Rosa in a Samuel Palmer twilight, piled up within a relatively shallow pictorial plane. They are lively, with all the rough spontaneity and brio of a Constable cloud study or a Turner sketch in oils.

Relatively small, all around 300 or 350 mm a side, these little panels are like windows into another world and are, contrary to my clumsy description, incredibly effective. Built up of thick patches of poured, layered, and brushed oil paint, further volume and glistening wetness and lustre is added with strategically applied clear glaze. They appear to have an intuitive and improvised responsiveness to them, subsumed into tight and assured compositional control. In the broadest sense, technical comparisons can be made with the work of Marie le Lievre, but of course the result is quite different.

The darkness of the rocks is defribulated into life with unexpected shocks of carmine and turquoise or acidic yellow-green and ashen rose. While Logan is obviously interested in the emotional and spiritual associations of the land (indeed, they originate with her forays into the South Island high country and physical presence), at the same time the landscape in her paintings functions primarily as a scaffold, secondary to the formal qualities of colour, composition and mark. The relatively small scale of the paintings creates an intimate experience; cabinet works for private contemplation, to disappear into in a quiet moment. In a large group, the repetitions and echoes build into an encyclopaedic catalogue of place that exists only in the artist’s imagination.

Logan graduated from the University of Canterbury in 2013 with a BFA in Painting and a BA in Spanish and Art History. The Art History part may explain the references to the Canterbury tradition of bravura brushwork and a palette dominated by ochres and earth tones, but the synthesis appears fully resolved, and an unusual conceptual leap from earlier geometrically abstract work or even the more recent landscapes that seemed to take their palette from McCahon’s Titirangi period and their forms from Chinoiserie/Japonisme. There will be, however, limits to the possibilities of the format before it must evolve yet again in another direction.

One must assume the dreamlike, aetherial quality a deliberate intention, shading into the nightmarish (with a nod to the formidable cliffs and gloomy cypresses or Arnold Böcklin’s Island of the Dead). And if I’ve made the painting sound in any way cheesy, formulaic or derivative by my trying to dig down into their inspiration, rest assured that they are not.