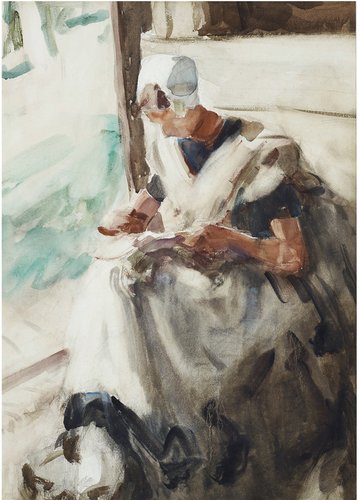 As with any artist who, rarely, continues to develop their work until the end of their life, the focus tends to be on their later, more adventurous productions, with the emerging and early work confined to the studies of art historians, and seen largely as merely a precursor to the later, greater achievement. The Mahara Gallery has made a bold and unexpectedly refreshing attempt to shift the focus to Hodgkins as an emerging artist, both in Dunedin and fresh off the boat in Europe, giving a decided New Zealand perspective on the artist's origins.

When the news of Frances Hodgkins being hung “on the line” at the Royal Academy filtered through to New Zealand in 1903, “Local Girl Makes Good” may have headed the report in a community newspaper had they existed at the time (1). Frances Hodgkins has always occupied an ambivalent place in New Zealand’s memory: she may have been born here, but she soon left, and all her lasting stimulation and achievement happened on the other side of the planet. Our provincial pleasure in such achievement is not so much about valuing her work as offering reassurance that a cultural outpost like New Zealand could produce an artist admired in metropolitan European centres. Recently, much the same thing has happened with Len Lye - except that his stage was New York, a place as aspirational for New Zealand artists in the later 20th century as London was in the later 19th. Since then this country may have grown in cultural confidence and experience globally, but echoes of the old “colonial cringe” still resonate (2).

Since her death in 1947 her reputation has had a somewhat chequered career. At its height she was seen as one of the more adventurous members of the British avant-guarde - such as it was - but from the 1950s to around the mid-1970s she dropped out of sight in exhibition and art history culture. Even now, with a revival of interest in that period, her inclusion in more recent historical shows has been minimal. It’s been suggested that her foreignness and gender have counted against her being remembered more widely. In the meantime art institutions and private collectors in New Zealand have been assiduously amassing her work in very belated recognition of her achievement (3), with the current catalogue raisonne project the apex of local, gathering interest.

As with any artist who, rarely, continues to develop their work until the end of their life, the focus tends to be on their later, more adventurous productions, with the emerging and early work confined to the studies of art historians, and seen largely as merely a precursor to the later, greater achievement. The Mahara Gallery has made a bold and unexpectedly refreshing attempt to shift the focus to Hodgkins as an emerging artist, both in Dunedin and fresh off the boat in Europe, giving a decided New Zealand perspective on the artist’s origins.

Waikanae has a special connection with Hodgkins. In 1893 her painter sister Isabel married lawyer Will Field who later became the long-serving MP for Otaki. The Fields collected art - including Frances’s - and their collection represented an interesting cross-section of her contemporaries. About half of it was later broken up and dispersed (4), the remaining half retained by the Field family to the present - known as the Field Collection Trust - making parts of it available for Mahara exhibitions, with a promise of a long-term loan of the whole collection when the Kapiti District Council is able to provide a building with the necessary secure and environmentally suitable conditions. After her death and cremation Frances Hodgkins’ ashes were returned to New Zealand and interred in the Fields’ family plot at the Waikanae cemetery.

Since 2000 Mahara Gallery has mounted four exhibitions relating to Hodgkins’ work, each accompanied by modest but handsome and informative publications (5), each occasion not only expanding our knowledge of her work and its place but also cementing our relationship with her memory. This new show is important for the rare opportunity it affords to see comparatively so many early works in the flesh. Despite recent digital advances in reproduction, most artists’ work remains poorly served in the sense of conveying its materiality and especially the nuances of an advanced watercolour technique such as Hodgkins’. The flattening out reproduction tends to confer encourages viewer response to focus on the subject matter, whereas the presence of the actual work encourages an immersion in the technique, which in the case of An Emerging Talent is a revelation. And it points to the advent of a steady development of a central element in her work: the submission of the apparent subject matter to the application of the paint, the colour relationships and the formal arrangement of the content within the frame. As she said later: “I, my medium and my subject act and react to produce new and vital creations …”

For An Emerging Talent guest curator Victoria Robson and Mahara director Janet Bayly have drawn on the Field Collection for eight of the exhibition’s works, the remaining thirteen coming from private collections around the North Island. The chronology ranges from c1890 to 1913, with some of these images not seen in public since 1969’s nationally-touring centenary exhibition. These twenty-one works track her development from the stilted quality of The Captain - done when she was about 20 - through those works showing the liberating influence of the peripatetic Italian painter Girolamo Nerli (whom she met in 1893 when twenty-four) - to the technically accomplished works of her first European tour in the first decade of the 20th century; as she said “looking for colour and light.”

With Hodgkins’ early work it’s easy to stumble at the seeming conventions of her subject matter and fall prey to prejudices against watercolour, but seeing past these considerations opens a portal to her real achievement - a rapid transition from an often clunky hesitancy to a sometimes breath-taking accomplishment of expression. This latter, once exposed to the influence of British modernism in the 1920s, graduated to constant experiment in which an apparent realism was wholly subject to an abstracted naturalism that both recorded personal sensations and explored the possibilities of colour and form. She maintained this approach vigorously to the end of her life. An Emerging Talent is where it began.

(1) A decade later, in 1913, there was a headline in the Otago Daily Times: “A Dunedin Girl Conquers Paris.”

(2) In recent years the Auckland Art Gallery has been engaged in a Frances Hodgkins’ catalogue raisonne project, building on earlier research by art historians Eric McCormick and Rodney Wilson. The project, involving art historians throughout New Zealand, is led by Senior Curator Mary Kisler and also supported by the Stout Trust and NZ branches of the Decorative and Fine Arts Society. The planned website is due to be launched later this year. In a 2015 AAG publication staffer Catherine Hammond wrote of the project: “[it] will be a continuation of the Gallery’s long-standing dedication to researching and understanding one of our finest modernist painters.”

(3) In a letter to her mother from Treboul on 31st October 1921 the artist wrote: “Don’t let N Zealand wait to put up a memorial tablet to my memory - let her help me now whilst I am working at work that I hope will live after me. All my friends ask Why doesn’t your country help you? ”

(4) Fortunately, a full photographic record exists for the entire collection, albeit in black and white, a copy of which is available in the current Mahara show.