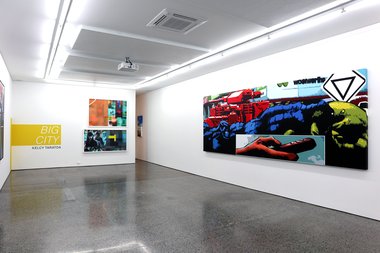 The theme of Taratoa's show 'Big City' at Nadene Milne's new Christchurch gallery, is the Baurdrillardian hyperreality of contemporary life and the currency of privacy in the modern surveillance state; the idea that technology makes the whole world one big panopticon. His conceptual model is Picasso's 'Guernica' (1937) - he wants to translate these concerns though his particular brand of political history painting into something immediate and accessible.

Kelcy Taratoa is a fascinating artist, and to be honest, when I first saw his work in the early 2000s I didn’t know quite what to make of it. Then, it seemed perhaps too busy, too much in the shop window going on all at once. The themes were urban and global, a kind of pop art that drew on the aesthetic of hip hop, video games, street art and graphic design. I wasn’t convinced it had anywhere to go from there, but any good art critic should be able to revisit these things and decide they were completely wrong.

Taratoa’s work has continued to evolve. There is a family resemblance to some of Shane Cotton’s work, if Cotton had been born a generation later as a digital native, and not incidentally Cotton taught Taratoa at Massey’s renowned Māori visual arts programme in Palmerston North - though Taratoa considers himself what he calls a “detribalised urbanite”. Where Cotton’s paintings in the 1990s drew on McCahon and the painted whare of Northland for compositional tricks to compartmentalise and arrange the image in interesting ways, Taratoa takes up the vernacular of the computer screen and internet to emphasise the artifice of his painting.

The theme of Taratoa’s show Big City at Nadene Milne’s new Christchurch gallery, is the Baurdrillardian hyperreality of contemporary life and the currency of privacy in the modern surveillance state; the idea that technology makes the whole world one big panopticon. His conceptual model is Picasso’s Guernica (1937) - he wants to translate these concerns though his particular brand of political history painting into something immediate and accessible. As Brian Eno once said, if you want to use the new technology to make art, look to the glitches, and Taratoa is looking to the glitches in The Matrix.

Another aspect of the artifice is the clever trompe-l’œil of imitating a screenprint or digital print in paint. The immaculately masked edges and the flatness of the paint, betraying no evidence of a brushstroke or roller, indicate the patience and high levels of technical skill involved. The nearest equivalent I can think of is Lichtenstein’s imitation of the comic strip frame down to the Ben-Day dots, married to Japanese pop artist Takashi Murakami’s Superflat style and the aesthetics of science fiction and augmented reality (the graphic FX and theme of the US television show Person of Interest come to mind).

Episode 006 is an example of Taratoa’s earlier work from 2004, reducing political considerations to stylised symbols and hieratic imagery the same way that Byzantine ikons did theology. The cityscape in the background (recalling the opening credits of many a formulaic American Sci Fi show of the early 1980s with their sequencer-heavy synth theme tunes) is as much a place of alienation and danger as the desert of the Thebiad was for the hermit saints, complete with Optimus Prime as some otherworldly supernatural protective presence.

These earlier works were an exercise in self-questioning on Taratoa’s part, an exploration of the meaning of identity in a fragmented, techno-postmodern globalised world. These newer works have expanded the inquisitional gaze to how that world relates back to the individual. After climate change, the issues around surveillance and the right to privacy are the biggest and most difficult to navigate of our time.

The fascinating white-on-white painting Disappeared A201 (2015), is a conceptual cousin of Pre-Raphaelite painter William Holman Hunt’s 1853 The Awakening Conscience, though in this case, instead of waking to her fallen state as a kept woman in a tangle of hypocritical Victorian morality, Taratoa’s subject has been woken (a moment of Dasein) to the nature of what Marx called the “false consciousness” that surrounds her. This places her in immediate danger, alluded to by the menacing authority figures below. It’s very cinematic.

The heroically-scaled work Big City (2007) more obviously highlights the way we experience the world through the cyborg retinas of the media. A tank in fiery, paranoid red menaces the viewer against the mundane background of a Woolworth’s supermarket. A prominent remote control reminds us that we, the watchers, are also the watched, and a tiny white handprint, like an Apple Mac OS X open hand cursor, suggests the idea of the screen between us and the action - distance and mediation.

Surveillance Everything Is Fine That Is Our Illusion B1 (2013), while visually arresting, has perhaps lost itself in the televisual imagery - the box frames dividing up the composition and camera-eyes (including HAL9000’s baleful fisheye lens) seem a little bit overcooked to me. On the other hand, Without Conscience F2T2EA (2013), taking up a popular late 1990s/early 2000s trope of painting how a low-resolution VDU looks (the video screen as the new retina), spins, comic book fashion, a powerful sense of how drone warfare dangerously subtracts the human dimension from warfare. Again, the box/framing composition comes dangerously close to overwhelming the image, while directness of message may trump aesthetic questions in this scenario.

Some real prints in the show (not paintings in disguise) take the abstracting qualities of the digital to their logical conclusion - total pixilation. This obliterates any representation of political polemic, but in the Marshall McLuhan sense, the Medium is the Message. What is real and what are merely manipulated pixels on a screen (or particles of pigment in a medium) for that matter?

McLuhan was the prophet of this worldview, but he didn’t invent it from a whole cloth. McLuhan, a Catholic, drew heavily on the ideas of Pierre Teilhard de Chardin, a French philosopher and Jesuit priest, who got into a spot of bother with the Vatican with his theories that evolution moves in the direction of a collective global consciousness, the noösphere. In many ways the internet fulfils a similar role.

Even as the internet expands our potential as individuals to near-omniscience, we leave behind ourselves a trail of metadata as the price of the Faustian bargain. What is truth anymore when we experience so much of the world through screens and manipulated imagery? At the end of the day, however, painting remains the first, oldest, and perhaps safest virtual reality.