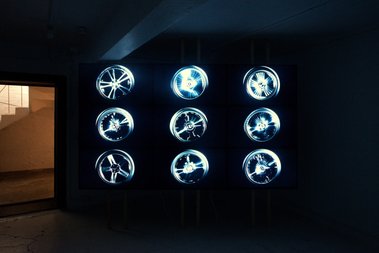 In 'Motor Reliefs', the revolving sports wheel rims stop, start, speed up - present the illusion of turning backwards - and then slow down. There are nine different brands, their features accentuated by tyres that are comparatively thin, while the silvery light flashes elegantly off the radiating struts, sometimes turning to a blur.

Steve Carr is well known for his inventive, spectacular and often funny videos, and unusual (often droll) sculptures, but this new show has an installation of sequential photographs (pinned to the wall) and is comparatively serious in mood, focussing on a ballerina’s hand gestures. The photographs are in the main gallery, but downstairs are two video works, formally connected by a circular motif. One is noisy, the other silent; one with a single monitor, the other with nine stacked in a grid.

Carr‘s 256 hand movement photographs, in black and white, are austerely minimal, made by a fixed camera operating on a timer - so sometimes there is no hand or arm appearing at all. The delicate configurations of fingers, wrist and palm, taken out context of what the rest of the dancer’s body is up to, seem as if presenting a Thai dancer’s manual repertoire, with unusual angles. However because Lett’s gallery space is so architecturally distinctive it tends to dominate this project. The sequence fits in nicely with the concurrent videos, and follows the tradition of Marey and Muybridge that a great many artists have looked at. Nevertheless it seems to lack the wallop of Carr‘s other endeavours.

Downstairs the videos are more imposing in their very intimate spaces, one using reflected light bouncing off spinning wheels, the other using cacophonous sound, via a recorded drum solo from Led Zepplin’s John Bonham. In Motor Reliefs, the revolving sports wheel rims stop, start, speed up - present the illusion of turning backwards - and then slow down. There are nine different brands, their features accentuated by tyres that are comparatively thin, while the silvery light flashes elegantly off the radiating struts, sometimes turning to a blur. For lovers of art history, Carr’s project cleverly combines ‘Boy Racer’ culture with the optical experiments of Marcel Duchamp that the work’s title refers to. At first all the glowing wheels seem identical, but gradually the distinctive characteristics of each one becomes apparent.

With The Song Remains the Same, the video loop shows minute particles springing into space from a violently beaten cymbal (with the drum solo soundtrack), turning into the Milky way, and then perhaps the wider cosmos, before rapidly returning to the undulating brass disc. The thousands of specks in suspension have something akin to the ‘dust’ video of Nicholas Mangan, while also suggesting repeating cycles of expanding and contracting energies, cosmic forces and vast spaces created and driven by God’s drum kit.

The whole exhibition package, the three presented works all together - of hand gestures, spinning wheels and shape-shifting cosmos - suggest a composite portrait of the dancing multi-limbed Hindu deity Shiva, often seen in bronze statues, dancing within a ring of fire and playing a Damaru hand-drum. Coincidentally, not planned by Carr, the three types of visual image interconnect, the delicate hands and fingers resonating with the levitating and falling ‘cosmic’ dust, along with nine wheels, seeming to turn backward as well as forward, their rotating forms delineated in the cold white light.