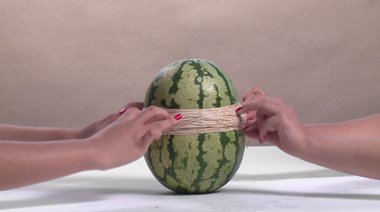 With repeated viewings of Watermelon, we gradually start to notice some finely detailed peculiarities within the process. One rubber band gets broken but remains, hanging limply. At a certain stage the women swap 'rubber band' roles and even slow down as they become tired.

Steve Carr
The Science of Ecstasy and Immortality

In this collaboration with Nat Cheshire the architect, Steve Carr presents two videos within a diaphanous wall/plinth/ceiling structure (made from scrim) that displays and separates both works (a plasma screen and a projection) and the performative residue from one of them. The videos and installation are typical Carr in their use of humour, process, movement (over time), suspense and (more often than not) beauty.

Watermelon (2015) is a documented performance where two young women (we see only their lithe arms, hands and painted nails) slowly and methodically place stretched hundreds of rubber bands, one-by-one, over a watermelon standing vertically on a table. We hear a very slight click as one performer pulls back the stretched apart length of rubber held out by the other and releases it once it is positioned halfway down the melon. Later on, as they accumulate, we hear a soft hissing sound as the built up pressure causes the stressed fruit to slowly secrete fluid. Some foamy bubbles start to form.

This video lasts nearly thirty-five minutes, and builds up suspense as we wait for the fruit to shatter. The tension shifts from keen anticipation to boredom as the repetition becomes monotonous. When it finally (and suddenly) happens we are surprised by the cleanliness of the implosion, for the fruit is just horizontally split by the contracting rubber: not seeming to spray or shatter outwards at all. All this is presented in normal time.

With repeated viewings, we gradually start to notice some finely detailed peculiarities within the process. One rubber band gets broken but remains, hanging limply. At a certain stage the women swap ‘rubber band’ roles and even slow down as they become tired.

Around the corner, after we have seen the second video, we can examine the clump of contracted bands that look incongruous on an oversized scrim plinth. Half of them seem to have disappeared along with the melon, for the residue ‘sculpture’ appears dematerialised.

The other work will end up, I think, being one of Carr’s most popular videos, its use of ultra-slow motion having links with Nicholas Mangan’s A World Undone video, and Carr’s earlier Mystical Realisms: Modest Gestures video of exploding paint-filled balloons.

Bubble, Cactus (2014) shows a large floating soap bubble slowly descending onto the prickly spines of a lone cactus. In the ten minute loop it slowly disintegrates - not as immediately as you might think (for the cactus needles seem to enter the sphere quite a distance before causing damage) - with strings of soapy fluid later flailing convulsively in the aether, and the loop not being completed until the very last moonlike droplet (out of hundreds) has descended out of sight. Then the eyelike orb, like an immense sinking sun, starts to gradually reappear at the top projection edge.

With Cheshire’s use of porous hessian, the projection for Bubble, Cactus, is outside, aiming in. It is as if the enclosed viewing space is an eyeball in itself, with our eyes the retina (at the back) and the projection itself an iris. The exhibition seems to have metaphoric references to body parts, the watermelon and tightening rubber bands taking on overtones of castration, and the show overall perhaps referring to the libidinous gaze.

Bubble, Cactus, though, is very special, for it rewards many viewings. The bubble looks like a compound insect eye, and is quite wondrous as it lowers itself onto the bed of ferocious spines. The resulting, rapidly moving, ripple of the torn open soap film, and the scattering wide of circular droplets (like seeds), make it extraordinarily memorable.

I wonder if Steve saw the following Pumpkin Time Bomb piece on The Tonight Show with Jimmy Fallon about 6 ...

I wonder if Steve saw the following Pumpkin Time Bomb piece on The Tonight Show with Jimmy Fallon about 6 months ago (or on YouTube)? I saw it on tv at the time, so when I saw this Watermelon video work in the gallery, having already seen something very similar (although shorter and comedic) in a high profile pop culture context, that immediately contributed to my interpretation of the work.

The transformation from pop culture to high culture context is everywhere these days of course, but I don't think that is part of the artist's intention here - not according the the gallery text anyway.

The other pop cultural reference (kind of) that struck me was that every iPhone 6 now ships with video slow motion mode, shooting at 250 frames per second. Although not as slow at the Bubble, Cactus piece, many people are getting accustomed to seeing and making high definition, slow motion video themselves, as part of their everyday digital lives.