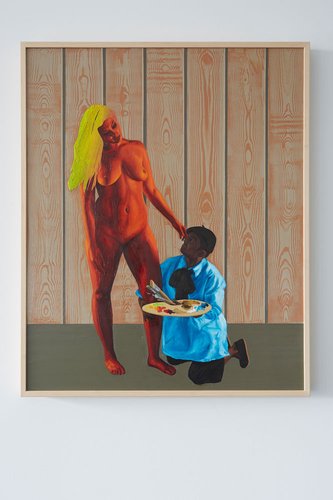 The gag is that these paintings are about painting. They mash up a bunch of well-used historical painting tropes with tropes from forty years ago. This is Goya on LSD or Rubens unplugged. It's Pop psychedelia mashed up with the high seriousness of history painting. And then thrown in is the grit and confusion of twenty first century gender politics. Boyce might seem to be trying to say something about his relationship with women.

Contemporary painting is having a difficult moment in the art world. It has to pull out some pretty fancy tricks to compete out there. It has to shock and surprise. Its greatest trick of all—stillness—is under appreciated and it suffers from unfavourable comparison to the moving image and the digital world. But Roger Boyce isn’t worried about any of this. His latest exhibition of paintings, School of Harm, despite its slightly dark title, is an unashamed celebration of painting and its crazy tics.

The exhibition is made up of nine paintings. Most of them contain three figures—two naked women and a small man who is always dressed in an artist’s smock with a palette and paint brushes. These three figures take centre stage in all the paintings and are set against a psychedelic backdrop of brilliant pulsing colour. And in almost all of the paintings, the figures manage to compose themselves into a pyramid shape—the compositional triangle.

There is a mock-serious exuberance about these paintings—two naked women and a small man frolicking around in a studio. The paintings freeze frame this trio in full frolicking flight. So it’s no surprise to find out that that Boyce, the two women, the small man and a photographer had a whale of a day taking the photographs on which the paintings are based. The fun is palpable and sexy.
Yet Boyce’s repetition of the pyramid compositional underlines the ridiculousness of it all.

The pyramid is a spatial organising device that artists have used at least since the seventeenth century-think Bernini sculptures or paintings by the French artist David from the eighteenth century. Boyce writes in his blog about the exhibition, that he was interested in exploring what he calls ‘dead-end painting conventions’. The pyramid composition leads the eye around a sculpture or a painting, but was also used for creating the aesthetics of heroism with dramatic poses. But it is of course patently artificial, and it’s this artificiality that was a ‘dead-end’ but which Boyce amps up in these paintings. And of course this dead-end artificiality is also the fakeness of painting which Boyce highlights with the purple, red, green and orange skin of the beautifully painted naked women.

I began by thinking of School of Harm as a conversation about painting but now I think it’s less of a conversation and more of a stand-up comedy routine. These paintings demand your attention in a Kath and Kim ‘look at me, look at me, look at me’ kind of way while entertaining in a way that only painting can—by recreating subjects with the wonder of technique, the wonder of a bunch of hairs on the end of a stick which interact with paint. And added to this is some extra twenty-first century layering—areas of collaged paint that have been dried on glass and then cut and overlaid as dots on a palette, or the blindfold slashes and masks that hide the eyes of some of the women.

But the gag is that these paintings are about painting. They mash up a bunch of well-used historical painting tropes with tropes from forty years ago. This is Goya on LSD or Rubens unplugged. It’s Pop psychedelia mashed up with the high seriousness of history painting. And then thrown in is the grit and confusion of twenty first century gender politics. Boyce might seem to be trying to say something about his relationship with women. Does he really as gallerist David Alsop told me, identify as the small man dominated by Amazonian women? Seriously? I think there’s no other place that small man would rather be. And I think I’ll pay more attention to Boyce’s own words from his blog: “The paintings, in their final testimony, substantiate and attest only to the hoary outlaw-biker credo—sworn to fun, loyal to none.” 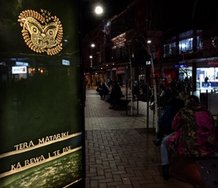 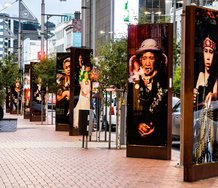 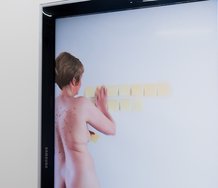 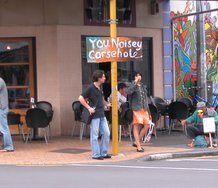