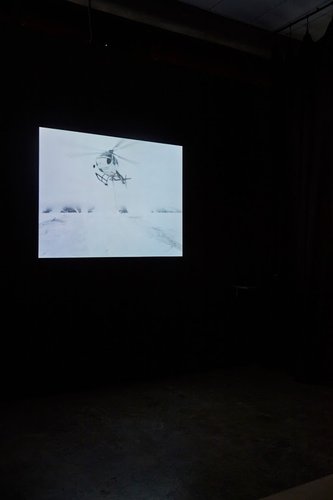 The term ex-ante means ‘before the event', hinting in many of the contributions, before the end of life on this planet. There is a suggestion that de Blaaij also intends ex/ante, where conceptually the aim seems to be to show how different types of filmic image can be blended, juxtaposed or layered to create new nuances of meaning, that truth is neither ex or ante, post or pre-facticity, but an imaginative anticipation. I guess you'd call this ‘hope'? Or, to flip it over, ‘despair'?

As the first show in Artspace from new director Remco de Blaaij this presentation of five moving image installations should be of considerable interest to contemporary art buffs, especially as (in my view) the previous director Adnan Yildiz was not as enthusiastic about this medium as his predecessor Caterina Riva-who brought some magnificent shows to Auckland.

First of all, it is great to see this line up of artists in Auckland. All but one are unknown here. It is a good mixture intellectually—geographically, thematically and visually—and de Blaaij has been generous in providing good, clearly expressed, information: five photocopied handouts in all. Terrific user-friendly stuff.

The term ex-ante means ‘before the event’, hinting in many of the contributions, before the end of life on this planet. There is a suggestion that de Blaaij also intends ex/ante, where conceptually the aim seems to be to show how different types of filmic image can be blended, juxtaposed or layered to create new nuances of meaning, that truth is neither ex or ante, post or pre-facticity, but an imaginative anticipation. I guess you’d call this ‘hope’? Or, to flip it over, ‘despair’?

With the mini-shows, the venue has been divided up with dark curtains to form smaller projection areas. This isolates the glowing screens but not the sound. The aural bleeding is a problem, as for some reason the Chia-Wei Hsu work dominates. Each video should have had separate sets of headphones.

So, amid this irritating cacophony, you have to grind your teeth and look closely to discover what will draw you back for further, more intensive, investigation, when you can mentally concentrate on each particular soundtrack—and its imagery—individually (and only it).

The cinematography of Tanya Busse and Emilija Škarnulytė‘s Hollow Earth is so beautiful and so politically interesting I never tire of it; this work seems to be about mineral extraction via open cast mining in Norway, Finland and Sweden, and how Russian capitalism has affected the northern arctic landscape. Although there are some gorgeously intense images of crystalline structures from various metals, the vistas of open cast mining in the mountain valleys taken from a helicopter, with muted colours, are surprisingly haunting. These shots of recently carved landscape, as opposed to conventional ‘natural’ mountains, become perhaps a new type of Sublime.

Irishman, Seamus Harahan, a couple of years ago won the Film London Jarman Award. He makes short ‘amateur’ films in the urban wastelands of cities like Belfast, where he records the unscripted real life of strangers (usually children or teenagers) on the spot—as he discovers it happening—filming secretly from high windows, and often combining the results with recorded music or voiceovers that unsettle your interpretation. His installation here (ten brief works, some of which go back to 2010) is very different from the others, with a monitor on the floor occasionally alternating with a projected wall video, and no black-out curtains, light seepage being deliberate.

Harahan has a knack of ‘finding’ memorably gritty images that contain distinctive body language: children standing in the middle of an open road, gathered around a pram, and staging mock punch-ups; a hooded adolescent lying on his belly to squeeze under a wire-netting barrier, changing his mind, reversing back out, getting up, dusting off the dirt and sauntering away. Things one would normally rarely see. Because they are unabashedly voyeuristic, seeing them here makes you uncomfortably implicated.

Susan Schuppli‘s two ominous contributions look at global phenomena and the evidence on one hand, of radioactive contamination, and the other of changes in the sun’s alignment in relation to the earth, and how its light is now being observed as behaving differently. With her effective use of coastal imagery, maps and charts, Trace Evidence examines traces of a naturally occurring, spontaneous nuclear fission that occurred two billion years ago in Oklo, Gabon, then looks Chernobyl’s contamination, through air currents, of the Swedish power plant in Forsmark, and then finally the oceanic pollution of Pacific waters adjacent to Canada from the Fukushima nuclear power plant and the Tohoku earthquake/tsunami. It is a methodically organised, highly informative, lucid and deeply scary documentary.

Trace Evidence uses a wall projection, but Can the Sun Lie? is presented on a monitor. It compares scientific orthodoxy with unusual metrological observations that allude to climate change, contrasting the assumed ‘factual’ understandings with peculiar atmospheric shifts noted by Inuit hunting communities that beg for a rethink.

Chia-Wei Hsu‘s project takes us to Huai Mo, a small Thai village in Chiang Rai, near the border of northern Thailand and Myanmar, and how that was affected by the history of China, especially in 1949 and the Chinese civil war between the Nationalist Government (led by Chiang Kai-shek) and the eventually victorious Communist rebels (led by Mao Zedong). The fleeing Nationalist army came down to Thailand and pretended to disband and shift to Taiwan—but they actually intended to counterattack; that never happened. They secretly stayed and in 1970 agreed to help the Thai government fight the communists, working as mercenaries. Some though supplemented their income by illegally growing opium poppies, and the Golden Triangle area became the notorious centre of the international drug trading industry.

Many of these Chinese opium growers were caught and executed, and their children put in orphanages. Some of those make up Chia-Wei Hsu’s film crew, for he has trained them. They film the orphanage’s director addressing his charges, and telling them stories at night about his previous (dangerous) life as an intelligence officer. What we have here are classic campfire yarns that are also true stories of life and death drama, where the narrative’s protagonists (or their relatives) are living amongst the community, all embedded in the intricacies and sweeping vectors of Thai, Burmese and Chinese history. The little understood back story is not apparent in the work itself, but set out in the support material.

Fiona Amundsen‘s video is closer to home and the history of Aotearoa New Zealand. It examines the American military machine during the latter stages of the Asia-Pacific Theatre of the Second World War, especially during the fire-bombing raids over cities like Tokyo. Pointedly projected onto a symbolically slanted screen, we hear recorded aural interviews with Ebina Kayoko, a woman who was a child who survived the conflagration, and Ben Kuroki, an American of Japanese ancestry who participated in the aerial combat.

These conversations are set against both American and Japanese film footage and recently filmed remains of American steel mills and blast furnaces in Pittsburgh, dwelling on American nationalism, as well as that of the Japanese. Amundsen’s use of the American steel manufacturing industrial complex as trope opens up interpretative possibilities that you can then apply to the content of the vivid voiceovers and graphic documentary imagery. You discover parallels and metaphors, linking horror with the materiality of liquefied steel, and the decaying architecture of pre-Eisenhower industrialisation.

This is an excellent, varied exhibition that is exasperating for the reasons I’ve already stated. Nevertheless it is well worth hanging in there for several visits; it is rich in interconnecting commonalities, such as Hsu with Harahan (social narrative), Amundsen with Busse/Škarnulytė (powerful corporate traces), or Harahan with Busse/Škarnulytė (evocative music). There is lots to see and mentally sift through, and some of it (visually) is unexpectedly thrilling.