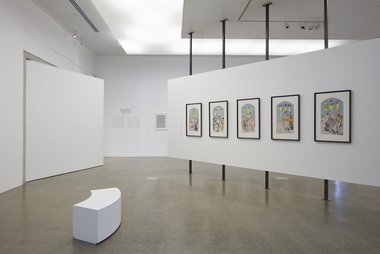 There is a split in this show—an oscillation in mood, a wavering of belief in spiritual realities. All this despite Bush's stylistic uniformity. The presentation speaks of a split-tongued vacillation, espousing contradictory values simultaneously. Some works are devotional—others sardonic—rife with competing attitudes and motivations.

In this touring show of recent Kushana Bush gouaches, Auckland’s Te Uru is the third port of call, having first been shown in Dunedin and then Christchurch. The twenty-two framed works on paper have been selected by Lauren Gutsell, the assistant DPAG curator. Bush lives in Dunedin.

Although in a CAG Bulletin publication-B.188—in an interview with Balamohan Shingade of ST PAUL St Gallery—Bush talks of her mystical experiences (her emotive bodily responses) when encountering Giotto frescoes or mediaeval religious works on paper in the Chester Beatty library in Dublin, her work can also be interpreted as satirical or mocking, even though it has stylistic affinities with the figure paintings of Stanley Spencer or early Jeffrey Harris—as well as Giotto. If one also thinks of Fernadez Botero and Beryl Cook as producers of caricature, then these works seem related. Especially if the figures are holding not weapons but plumbing or housekeeping tools.

Of all these rectangular images, eight are landscape format, and fourteen are portrait. The former—being much wider—allow the decorative sections (of painted fabric suspended on clotheslines, or floor plank textures) and rhythmic aspects (of turning heads and waving limbs) to dominate. They have a percussive musical quality, even though the subject-matter is often of religious martyrdom. Torture and execution as spectator sports are sardonically celebrated—though not too gruesomely rendered—as believers are flogged, crucified, burnt or about to be hung on specially constructed platforms, with musicians in contemporary dress playing instruments underneath, alongside leering faces smoking cigarettes or eating ice creams (in the tradition of Leonardo or Bosch).

In these jam packed Uccello-like compositions, Bush, like other New Zealand artists such as Georgie Hill, displays extraordinary control with hair-thin lines, razor-sharp edges and exquisitely ornate acuity, all clustered abound acrobatic figures suspended in two dimensional space to convey a nihilistic fairground exuberance. The picture-plane is flat and the swirling miasma of activity makes it hard to dissect the overall narrative.

Sartre is famous for writing that ‘hell is other people’, and these ostensibly ‘religious’ works exude that— scorn, not love or goodwill. Bush’s humour seems more bitter now than in her earlier work that was about sexual couplings and multi-ethnic mingling. More angry. Less giggly. More snarly, and overtly moral in its preoccupations, but allegorical. Like a Ship of Fools in mindset.

Yet, as you’d expect from her statement about mystical experiences and the show’s title which alludes to a hallucinatory, burning illuminated manuscript image—even though in the show we see a missionary being burnt at the stake—there is hope. Five of the vertical rectangles seem to reference stain glass windows and French or Flemish paintings. In these there is a pervading optimism.

Therefore overall, there is a split in this show—an oscillation in mood, a wavering of belief in spiritual realities. All this despite Bush’s stylistic uniformity. The presentation speaks of a split-tongued vacillation, espousing contradictory values simultaneously. Some works are devotional—others sardonic—rife with competing attitudes and motivations.